Hemlock is the second Finger Lake running west to east. As the only lake that did not keep its Native American name (“Onehda Tecarneodi”), it was named for the hemlock trees that grow around it, which prefer cool, moist locations and tend to grow under taller trees. Warblers like to make their homes in hemlocks. Compared to the other Finger Lakes,  it’s one of the smaller ones in terms of length and area, and it’s the second narrowest. For this reason, it is considered one of the minor Finger Lakes. Here are its official stats, courtesy of New York State’s Department of Environmental Conservation: 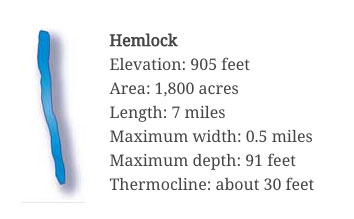 Up until the late 18th century, the Seneca Native Americans lived around Hemlock Lake. In 1779, Gen. John Sullivan captured this land, and the first white settlers arrived in the 1790s. These settlers built their homes out of wooden slabs, giving the name “Slab City” to the area surrounding the lake for a while, and they used the lake to shuttle logs across. In the 19th century, Hemlock was known as the “blue blood” lake and sat surrounded by many wealthy summer homes and recreation facilities. 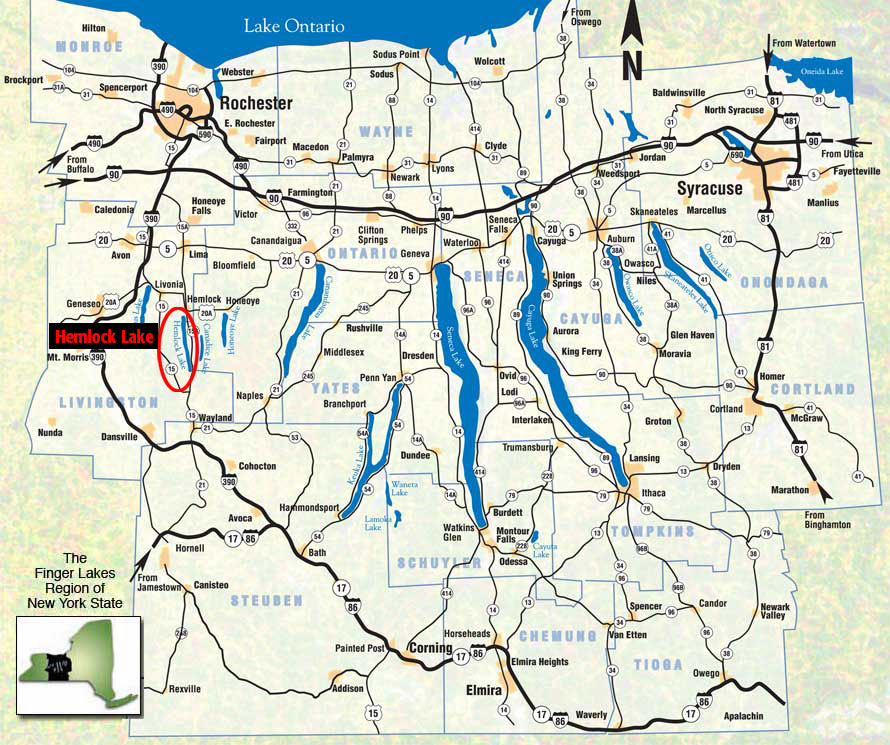 In 1872, the City of Rochester identified the lake as a water source and it was identified as a source of public drinking water in 1876. “Glory! Hemlock Water at Last!” a January 1876 newspaper headline announced. In 1895, the city began acquiring properties around the lake to protect the water, gradually demolishing physical structures until it was back to wild land. In 2010, the New York Department of Environmental Conservation purchased Hemlock Lake from the City of Rochester.

Known for its peace, quiet, and closeness to nature, Hemlock is one of the only Finger Lakes whose shoreline is undeveloped, and it will remain so, leaving the Hemlock-Canadice State Forest as its major attraction. A 415-acre portion of the forest on the southwest end of the lake has “old growth” trees, meaning they have not been cut down by settlers – some of these trees are thought to be more than 500 years old. This is one of the largest “old-growth” tracts in New York.

Since it is Rochester’s source of public drinking water, several restrictions have been in place to keep the lake clean. In addition to restricting shoreline development, boats are limited to 17 feet and 10 horsepower, and swimming is not permitted. Boating and fishing are completely prohibited in the northernmost part of the lake. Hemlock Lake also supplies water to Henrietta, Rush, and Livonia. With Canadice Lake, it supplies the City of Rochester with 37 million gallons of drinking water per day.

Because the natural area is so well preserved, it is a popular spot for canoeing and kayaking. In fact, Hemlock Lake is so connected with its wildlife that in 2016, a man named Matthew Garrity filmed a black bear swimming across the lake right in front of his kayak. Hemlock Lake Park also offers a recreation area with picnic tables.

This Finger Lakes has been noted an important bird conservation area. In the 1970s, the last wild bald eagle in New York was found nesting here at the south end of the lake. Bald eagles continue to nest in the area as well as other at-risk species including sharp-shinned hawks, northern harriers, red-headed woodpeckers, horned larks, cerulean warblers, and vesper sparrows.

Hemlock Lake is known for its landlocked salmon population and lake trout. Other cold-water fish include brown trout and rainbow trout, and the lake is also home to warm-water fish like smallmouth bass and significantly sized chain pickerel. Most of these fish have been stocked. Weed beds grow in large patches along the south end of the lake, with milfoil as the main vegetation. Boat launching sites are located at the northeast and southeast corners of the lake.

Canadice Lake is connected to Hemlock Lake at the north through a spillway. A patch of land known as Rob’s Trail, named after conservationist and Finger Lakes advocate Rob van der Stricht and completed in 2016, runs between the two lakes and provides hiking access to both in addition to gorges and a waterfall.

10/29/2020 New York Kitchen originated from the collaboration of Constellation Brands, Wegmans Food Markets, Rochester Institute of Technology, and the New York Wine and…