One would think that, as the shallowest of the Finger Lakes, Honeoye Lake has little to hide. Yet tucked into its peaceful, recreational cottage culture, surprises like river otters pop out to remind visitors how much the Finger Lakes have to offer. Its name is said to have come from the Iroquois Native American word “ha-ne-a-yeh,” or “lying lake,” because it lies north to south, though other legends say it is named so for a man whose finger was bitten by a rattlesnake and had to be chopped off.

Honeoye is the fourth Finger Lake from west to east. It’s the second shortest and smallest in area behind Canadice Lake, and it’s thought to generally have the warmest water during the summer – which adds to its recreational appeal. It also has the shortest water retention rate as water enters the inlet and exits into Honeoye Creek in 10 months. Here are its official stats, courtesy of New York State’s Department of Environmental Conservation: 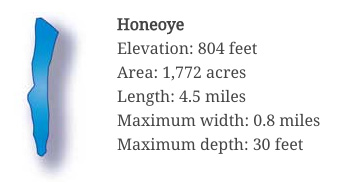 With 235 lakefront-access cottages around the shoreline, it is known as the “working man’s lake.” As Emily McFaul reported for her 2009 article “Celebrating the ‘cottage culture’ of Honeoye Lake” in the Daily Messenger, the cottages were designed modestly as a resort area for middle-class workers who wanted affordable lakefront vacation property. Many were built in the 1930s during the Great Depression, and their residents gradually built renovations onto them. Over the years, more residents have been staying year-round.

Residents around the lake use it as a base for many of their seasonal celebrations. Over Labor Day weekend, they mark the end of summer with “Ring of Fire” flares around the perimeter. In the winters of the 1950s and 1960s, since the lake freezes over completely in the winter, people would come together on it for a large winter festival.

Around 600 BC, a small settlement of Native Americans occupied the northern shore of the lake, relying on the surrounding habitats to hunt and gather and fishing the waters with fiber-woven nets. For a long period following their settlement, the lake went uninhabited. Up until 1779, various Native American settlements came and went from around the lake, some participating in their own agriculture to sustain themselves. Around the eleventh century, the Seneca Native Americans settled here. When General John Sullivan’s Continental Army arrived, they found the Seneca villages deserted. 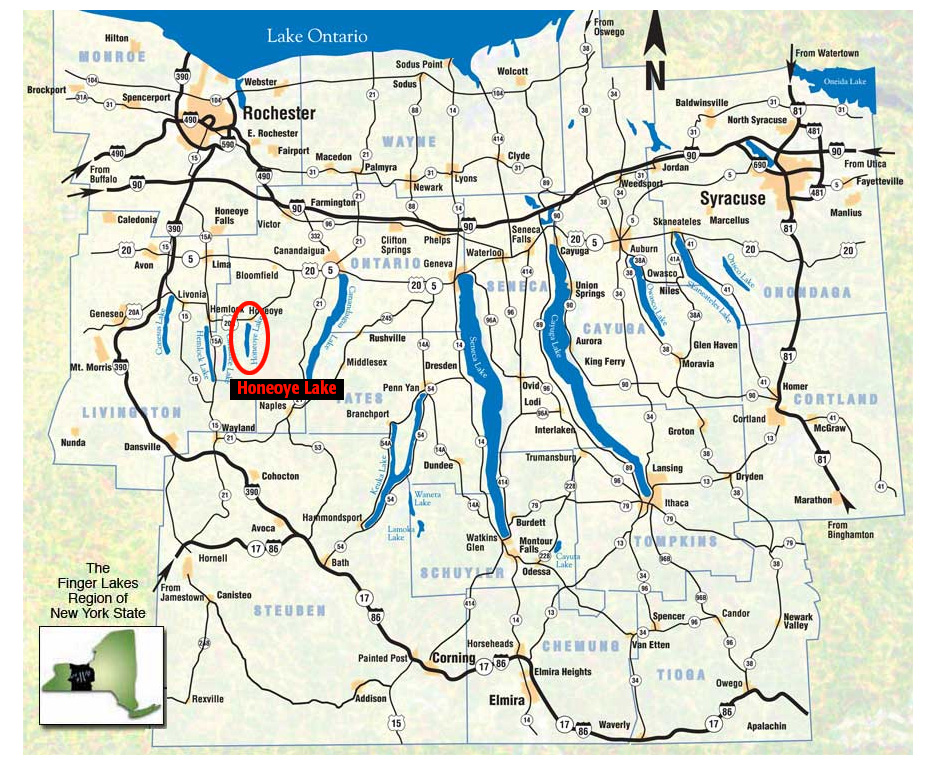 River otters now inhabit the waters of Honeoye thanks to reintegration efforts as part of the River Otter Project in 2000. Though they were once regular members of the Finger Lakes ecosystems, they had been absent for almost 100 years due to habitat loss before the New York State Department of Environmental Conservation relocated 279 of them into Central and Western New York from the Adirondacks. Fifty-eight of these otters were released throughout the Southern Tier. One of the most likely spots to see them is in the Honeoye Inlet Wildlife Management Area, which sits at the southern base of the lake and is open for recreation year-round. Other wildlife found here include wild turkeys, raptors, waterfowl, grassland birds, and furbearers.

While the shores are tightly lined with cottages, minimal activity occurs around the lake, making it a peaceful spot to relax and take in the surroundings. It’s ideal to bike around because the perimeter is 19 miles around and relatively flat. It has the most forested lands and least agricultural land in its drainage basin out of all the Finger Lakes. At the northern end of the lake, Sandy Bottom Beach offers recreational facilities including a skateboard area and supervised swimming. During the summer, this site is closed for boat launching.

Because it’s so shallow, plant life thrives. Rooted vegetation like eelgrass, Eurasian milfoil, and water stargrass enrich the strong fishing environment of the lake. The Department of Environmental Conservation stocks walleye annually to add to the other sportfish including largemouth bass, smallmouth bass, and chain pickerel. Currently, they’re maintaining a high density of predator species. Winter maintenance of both public access sites – Honeoye Lake Public Boat Launch in the southeast corner of the lake and Sandy Bottom Beach in the northwest corner – allow for convenient ice fishing.