As the other giant of the Finger Lakes, Cayuga ties for longest with Seneca Lake and claims the title for widest and lowest in elevation, coming second in for biggest in area and deepest. Here are its official stats, courtesy of New York State’s Department of Environmental Conservation: 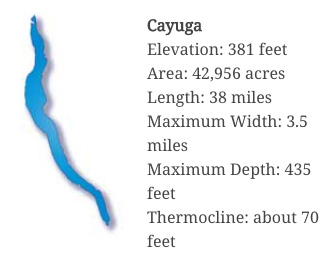 Cayuga is the second of two Finger Lakes that have islands. Frontenac Island appears to have been a sacred burial ground, as many bone fragments have been found here. North America’s oldest bone comb was also found here and can now be viewed at the Rochester Museum. Like Seneca Lake, the surrounding climate makes for excellent grape growing, and the route around the lake has been named as an official scenic byway.

From 1800 to 1857, a mile-long bridge stretched across the lake as a more efficient transportation route for goods and people. The Cayuga Long Bridge was at one point in time the longest bridge in the western hemisphere, and it was three-wagon-widths wide. (In fact, it was over a mile long – 5,412 feet to be exact.) The toll house lived on the west end, and a tavern and jail occupied the east end. Other bridges have attempted to take its place since its abandonment due to the difficulty and expense of maintaining it, but none have lasted.

The bodies of 1800s murderer Edward Rulloff’s victims were supposedly dumped in Cayuga Lake. Rulloff was seen carrying a trunk to the lake before his wife and daughter disappeared from his Lansing home; their bodies were never found, and police believed he had sunk them.

Also sunk at the bottom of the lake, an Erie canal boat from the 1800s was found in 2013. Since then, divers have explored the shipwreck hunting for treasure.

Shale palisades, a kind of steep cliff, can be found near Bolton Point on the southeastern end of the lake. These are rare outside the British Isles. The lake also lays on top of the deepest rock-salt mine in North America, owned by Cargill Salt, which is the largest salt product marketer in the world. 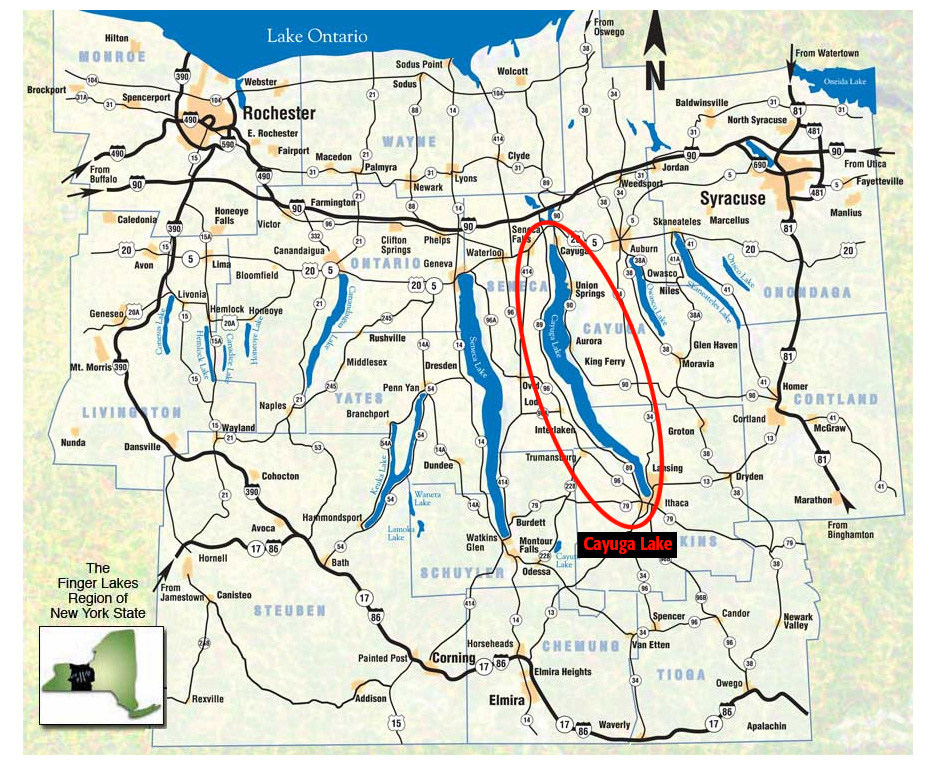 Three operational lighthouses decorate the lake in various spots. The Cayuga Inlet Breakwater Light stands in the middle of the lake north of the southern end, and the Cayuga Inlet Light just a short distance from the southern end. The Myers Point Lighthouse, the most recently built, is located on the east shore and operates between April and November with a six-second flash.

Like several of the other Finger Lakes, Cayuga has its own legend of a sea monster – and this one has a name. Reports of “Old Greeny” sightings occurred annually throughout the 1800s and into the early 1900s. In 1974, a teenager reported his arm was broken by a large kind of eel, and in 1979, a local professional diver came across a 35-foot creature.

At the northern end of the lake, Montezuma National Wildlife Refuge serves as a sanctuary for migrating birds. Around 242 species of birds rotate in and out of the refuge. In addition to a resident trio of bald eagles, wildlife such as herons, red-winged blackbirds, foxes, and beavers make their homes here on a temporary or permanent basis. As the refuge is open throughout the year, visitors can watch the migration and habitation patterns of various wildlife transition.

At the southern end sits the lively town of Ithaca. Up on one of its hills, Cornell University honors the lake through its alma mater, “Far Above Cayuga’s Waters.” It’s considered to be the most widely copied alma mater – making Cayuga a very special subject indeed.

Between Tongue and Teeth, Angela Fraleigh’s first major museum exhibition, brings together over a decade of the artist’s works which question and reimagine women’s roles…