“Otisco” means “waters dried away” in the language of the Native Americans who resided in this area because it used to be marshland. It has since grown out of that name thanks to several efforts to set up dams; the only aspect that remains true to the name is the causeway strip of land that runs across the water at the southern end.

Otisco Lake is the easternmost of the Finger Lakes. It’s one of the smaller lakes as the third shortest, third shallowest, third narrowest, and fourth smallest in area. It lies entirely within Onondaga county. The water enters from a creek at the southern end and flows out through “The Narrows,” a small gap in the surrounding woodlands, and over the dam at the northern end. Here are its official stats, courtesy of New York State’s Department of Environmental Conservation: 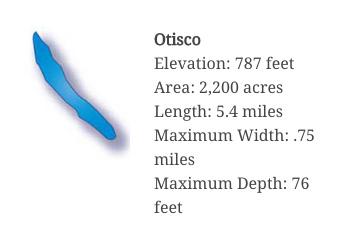 The man-made causeway at the southern end of the lake that used to be a wagon road divides the lake into two distinct basins – the water is smaller, shallower, and quite murky in the southern section yet relatively clear throughout the main part of the lake. The southern basin is fittingly known as “The Shallows,” and a gap in the causeway closer to the western end allows boats to pass through. This strip of land serves as one of Central New York’s most popular spots to fish from shore as it runs directly through the lake itself. It also offers some of the most spectacular lake views as one stands in the middle of the lake, able to look toward both the northern and southern ends at once.

In 2009, Tom Boise broke the world record for ice fishing tiger muskies when he caught one in Otisco Lake that was 46 inches long and weighed a little over 27 pounds. Tiger muskies serve as a distinctive trophy, and Otisco offers some of the best fishing for this particular species in the state. Some that were caught had been living there for 11 years. Largemouth bass over 20 inches are also regularly collected. On the first day of bass season during June, this lake also holds an annual fishing derby. New York State and Onondaga participate in active fish-stocking programs here; the Department of Environmental Conservation stocks 11,000 tiger muskies and 44,000 walleye every year.

The first dam, ten feet high, was constructed in 1886 to raise the water level and feed the Erie Canal. The lake was dammed again in 1908 to stock more for Syracuse’s water supply. These dams together raised the water level 13 feet. After several rehabilitation efforts, the Otisco Lake Dam is now 310 feet long, made of masonry stone partially encased on concrete, and it’s classified as a NYSDEC Class C Large High-Hazard Dam. 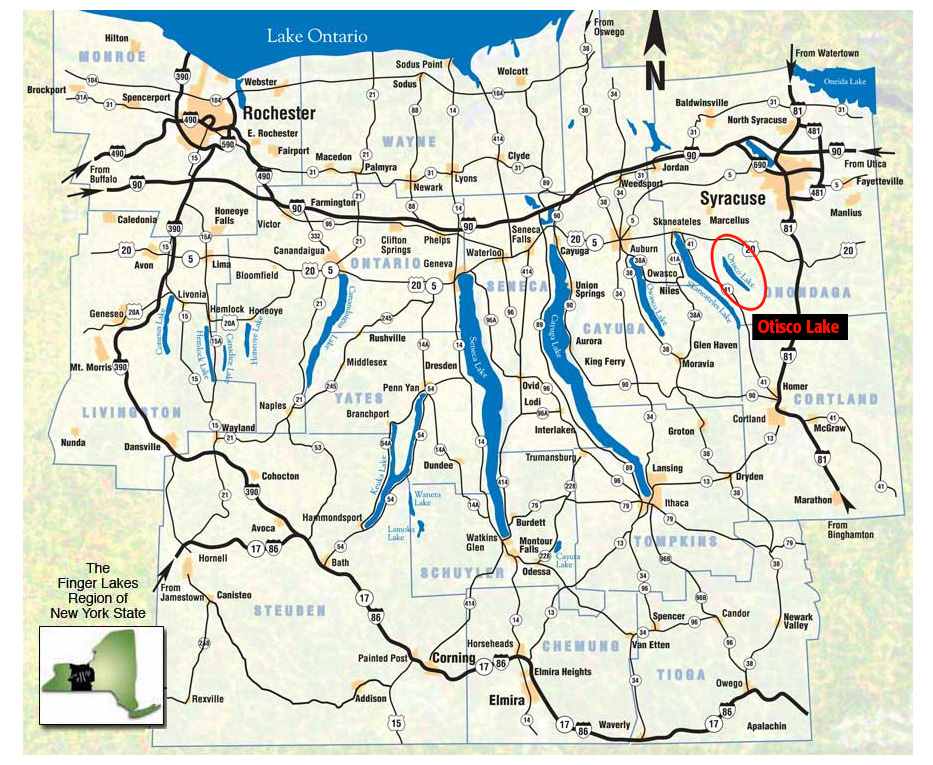 Otisco is surrounded by small, quiet communities, with many private year-round homes along the shoreline. Amber is the largest village on the lake and serves most of the needs of those living around it. Otherwise, there’s relatively few retail services. The remains of the “pudding mill,” a saw and grist mill from the 1800s claiming to have ground corn fine enough to make corn pudding, lies near the northwestern side of the lake. Otisco Lake County Park at the northeastern end offers three acres of land and 600 feet of lakefront access, decorated with sprawling willow trees.

The Otisco Lake Preserve contains 36 acres on the west side of the lake dedicated to conservation. With 1,300 feet of shoreline, it will be open to the public starting July 1 for hiking and observing wildlife. A half-mile trail includes stairs leading up to the shore for optimal public access. Like several of the other Finger Lakes, the area is a prime habitat for bald eagles. It tends to close seasonally to protect threatened species of nesting raptors. The preserve is in honor of Anneke and Thijs Wittink.

By the southwestern end of the lake, Spafford County Forest offers 701 acres of an experience even closer to nature with no developed facilities interrupting the connection with the wilderness. What were probably old jeep trails wind through the forest, and an old hang glider spot on the eastern edge offers expansive views of the valley. Close by, Bucktail Falls fan out and tumble over rocks for 21 feet.

Up until 2017, Otisco was the only Finger Lake without a public boat launch. Public access can now be attained at the DEC Hand Launch Site at the causeway. The Otisco Lake Marina in Marietta offers rental boats including pontoons in addition to private campgrounds at the southern end of the lake.

We’ve enjoyed living in the Finger Lakes for the past 20 years, but didn’t fully appreciate its spectacular beauty until we purchased our first…