Keuka may be the “Crooked Lake” at the heart of the Finger Lakes’ wine region, but its unique Y-shape makes its beauty stand out in so many aspects that it also carries the nickname “Lady of the Lakes.”

The name “Keuka” comes from the Native American phrase meaning “Canoe Landing.” The Seneca tribe called it “o-go-ya-ga,” “the promontory,” in reference to the point where the lake splits into a “Y.” Today, this is Bluff Point. It’s the third largest Finger Lake in area, length, and width behind the two giants of the Finger Lakes, Seneca and Cayuga. It holds around 379 billion gallons of water. Here are its official stats, courtesy of New York State’s Department of Environmental Conservation: 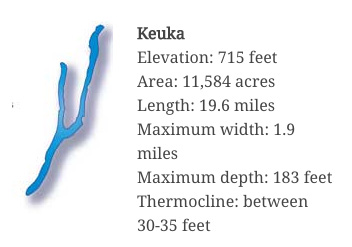 In addition to its shape, this lake is also distinct in that it flows both north and south. In fact, this occurs because of its shape: water from the west branch inlet at Sugar/Guyanoga Creek flows south into the east branch, where it combines with north-flowing water from the Cold Brook inlet at the southern end, and finally exits north out of the outlet into Seneca Lake. Keuka is the only Finger Lake that exits into another one.

The Owasco Native Americans, ancestors to the Senecas, brought agriculture to the area surrounding Keuka Lake around 900 years ago. Though the Senecas had allowed some colonists to reside in the area, full white settlement of the area began in 1787 by representatives of evangelist Jemima Wilkinson. Wilkinson is said to have told her followers she would demonstrate her miraculous powers by walking on the water of the lake as a test to see if they had faith in her.

At the south end of the lake, in 1829, the winemaking industry of the Finger Lakes was born. Rev. William Bostwick began growing grapes here for sacramental purposes and unearthed the secret of how ideal the lake environment was for growing them. In 1861, the Pleasant Valley Wine Company became the first official winery in the area, and by 1900, more than 10,000 acres of vineyards surrounded the lake. Since then, the Finger Lakes Region has blossomed into one of the most popular for winemaking in the eastern United States – thanks to Keuka.

Today, Dr. Konstantin Frank Winery overlooking the lake represents the Finger Lakes with a spot on Men’s Journal’s list of “11 Best Wineries in the United States.” In 2018, this winery earned Winery of the Year at the 33rd New York Wine Classic awards, while the highest award, Governor’s Cup, went to Keuka Spring Vineyards. 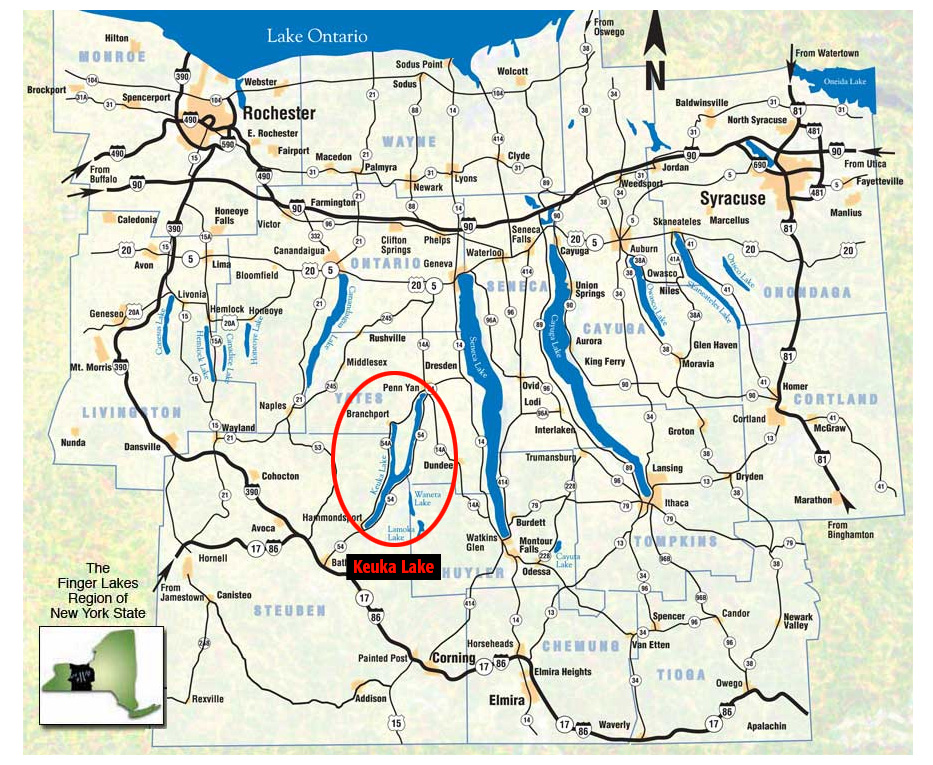 Like several of the other Finger Lakes, Keuka is used as part of a ceremony celebrating peace and abundant harvests by setting lights around the shore during Labor Day weekend. This Seneca tradition is called Genundowa, and it can last the whole weekend.

The lake has also served important commercial purposes. The Crooked Lake Canal, opened in 1833, used to carry local goods to Seneca Lake and then on to the Erie Canal. Beginning in 1837, steamboats also carried goods and passengers across the lake, and this traffic aided the development of cottages along the shoreline.

Keuka is considered to be the best fishery in the region, with smallmouth bass and lake trout as its main species. The lake and rainbow trout are completely self-sustaining now, requiring no stocking, and a state record brown trout was caught here in 1979, at 22 pounds and 4 ounces, before the Department of Environmental Conservation began stocking them. Captain Dick offers fishing charter boat trips on the lake through Keuka Big Foot Charters as he has been doing for 14 years.

With so many cottages around the shores, it can be difficult to gain access onto the lake. Public access sites can be found at Keuka State Park, the Village of Penn Yan Site, Indian Pines Park, and the Guyanoga Creek Site.