Native American legends say that the sky spirits would admire themselves in the reflective clarity of Skaneateles Lake, and when the lake spirit fell in love with them, it absorbed the fine, deep blue color of their robes. Today, while it continues to honor its transparent nature, its limited access shrouds hidden mysteries like the Ghost Buck whom only the lake may really know.

“Skaneateles” comes from the Native American word “skeh-ne-a-ties,” or “long waters.”  It has some of the cleanest and clearest water out of all the lakes, in part because it’s not burdened by industrial and agricultural waste. Consequently, it’s not filtered before distribution – one of the few lakes in the area that is not. It spans Onondaga, Cayuga, and Cortland counties. Here are its official stats, courtesy of New York State’s Department of Environmental Conservation: 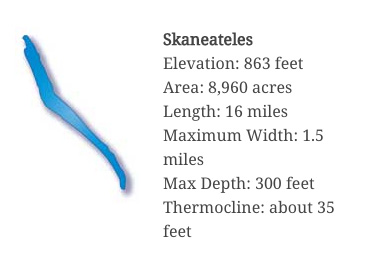 Boating has always been a significant part of the lake’s character. Steamboats like the Independent and Highland Chief were active during the 1800s, and smaller boats took over in the 20th century to deliver mail to boxes on lake-bound cottage docks. Today, Mid-Lakes Navigation Company offers a three-hour U.S. Mailboat Cruise to the public from Clift Park. The lake also serves as the venue for the Village of Skaneateles’ annual antique and classic boat show during the last weekend of July.

Clift Park offers swimming access in the lake and hosts concerts during the summer at its signature gazebo. The Town of Scott Family Park is another lakefront recreation area with canoe or kayak launch access into a brook that runs into the marsh at the southern end of the lake. Bahar Nature Preserve along the western side of the lake offers hiking, swimming, and birding along a portion of lakeshore.

A massive 17-point buck affectionately known as “The Ghost Buck,” “Hollywood,” and “Voltar,” had roamed the woods around Skaneateles Lake for years, inspiring awe from hunters all around as he eluded them, according to David Figura’s article for Syracuse.com. In November 2018, he was finally shot by 80-year-old hunter Jim Buff.

Historically, the lake has been central to the development of civilizations in the area. Tanneries, distilleries, and mills for saw, paper, grist, and wool developed along the creek, and some remnants can still be spotted. Many settlers were attracted to the lake because they could use it as a power source for water mills and other early industries. Several stops on the Underground Railroad were located around the lake as well. 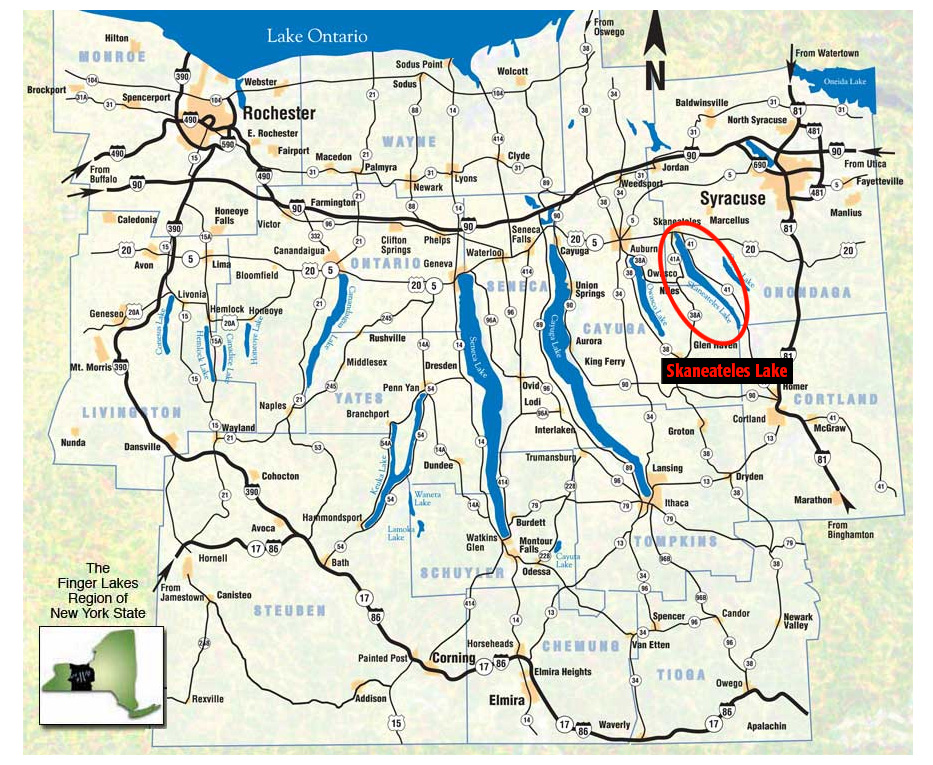 The Charlie Major Nature Trail is located on Skaneateles Creek, which connects to the lake from the north. It follows the path of what used to be Skaneateles Short Line railroad, a three-mile track operating from 1840 until 1981 to serve industries along the outlet and transport passengers. A stroll or bike ride along the trail will yield beautiful sights of nature as well as ruins from the railroad days.

For those who want a piece of the lake at home, the Skan Cam now offers live picture views of the lake throughout the day to curious members of the public. It can be accessed from any computer at https://www.skaneateles.com/skan-cam.

Popular fish species include rainbow trout, with the Department of Environmental Conservation stocking 20,000 ever year, and Atlantic salmon, of which they stock 9,000 yearly. Smallmouth bass and smaller lake trout, which repopulate completely on their own, are also notable species throughout the lake.

The lake hosts several marinas and fishing charters around its perimeter. In Skaneateles, North End Outdoors and Skaneateles Marina share positioning on the water. Brinson Marine is located in Syracuse, Krenzer Marine is in Sodus Point, and Owasco Marine is stationed in Auburn. Markin Fish Charters send boats out from the Skaneateles Lake Boat Launch for up to four people at a time.

Because its water is so clear, the lake is surrounded by many residencies, making it one of the least publicly accessible of the Finger Lakes. Public access can be gained at the DEC Launch Site on the west shore and at Skaneateles Park in the Village of Skaneateles.

03/17/2020 Story and photos by John Adamski I grew up near Sea Breeze, where Irondequoit Bay empties into Lake Ontario. Shaped much like a…