Where wildflowers flourish, sunken ships lay submerged beneath the water, and mysterious trails bear the mark of a mythical serpent, it’s no wonder that Seneca Native Americans called this lake “kanandague,” or “the chosen spot.” The tribe’s founders are said to have emerged from this place. It retains such awe today as, opposed to the “Working Man’s Lake,” it’s home to some of the most expensive lakefront property in New York State as noted in the Albany Business Review (2018).

Canandaigua Lake, the fifth Finger Lake from west to east, is the westernmost of the major Finger Lakes as it’s the fourth largest in area, fifth longest, fourth deepest, and fourth widest tied with Skaneateles Lake. Here are its official stats, courtesy of New York State’s Department of Environmental Conservation: 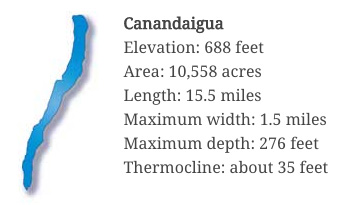 Bare Hill overlooks Canandaigua Lake from the east side. As the Native American legend goes, a boy from a village on the hill found and raised a two-headed serpent until it was too big to keep as a pet. When he released it, it encircled the village, trapping the people inside. Those who tried to escape were eaten. One day, a young warrior shot the beast with an arrow and it slid down the hill into the lake, spitting out the heads of its victims along the way. The large round stones around the lake are said to be these skulls, and little has been able to grow in what is said to be the path of the serpent’s fall. Legend says the serpent still lurks in the deepest part of the lake, and some former residents have claimed to have seen it.

One of Bare Hill’s upper trails leads to a large boulder known as Council Rock where every Labor Day weekend, the Native American traditional ceremony of lighting a bonfire as thanksgiving for peace and an abundant harvest takes place. This signals the beginning of the “Ring of Fire” or “Festival of Lights” as landowners around the perimeter of the lake join in lighting celebratory flares. Throughout the year, Bare Hill Unique Area is open for recreation. Hiking and backcountry camping are popular in this area.

At the bottom of the lake lay the remains of two boats that caught fire and sank. One is believed to be the “Lady of the Lake,” the first steamboat to travel across the lake for commercial service in 1827, which disappeared when passenger business began to decline and supposedly burned and sank near the present Canandaigua Pier. The other is believed to be the Onnalinda, the largest of the lake’s steamboats, considered to be its “Queen of the Steamboat Era.” It launched in 1888 and was eventually dismantled and set on fire, mostly likely due to a decline in business, floating out to the eastern end of the lake to sink. Steamboats carried passengers and goods across the lake to the City of Canandaigua until the last steamboat, the Onanda, was moved to the Hudson River in 1924. Now, a replica steamboat named the Canandaigua Lady offers tour services across the lake. 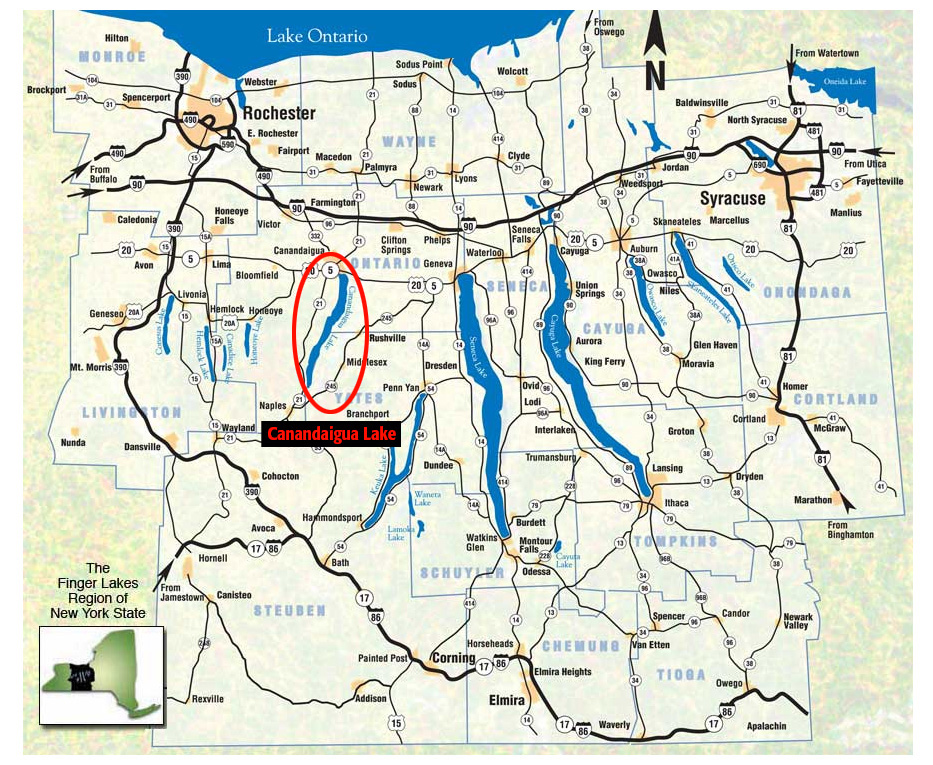 Canandaigua is home to one of the two Finger Lake islands, Squaw Island, at the northern end of the lake. Supposedly the Seneca Native Americans would hide their women and children here during Sullivan’s Expedition. It’s free and open for recreation year-round, and it serves as the smallest state park in New York. As noted by New York State’s Department of Environmental Conservation, it’s one of the only accessible places in the world with oncolites, or “water biscuits,” which are flat cakes of lime deposited from solution in the water. The island has been shrinking as wave action and other elements erodes its shoreline.

Kershaw Park is located on the northern end of the lake, but it used to be part of the lake. Between 1920 and 1936, this area was filled in with many objects, including old cars, to anchor the ground. The park and swimming area are open Memorial Day through Labor Day.

The lake has historically served its residents in many ways. While today it provides clean drinking water to residents in the area who use over three million gallons each day, the Brady and McCormack ice companies used to employ workers to saw ice from the lake. Windsurfing is one of its most popular recreational activities, and public access sites can be found at Canandaigua State Marine Park, Woodville, West River, and Onanda, some of which are maintained year-round.

by James P. Hughes We settled back in the reclining leather seats with attached tray tables as the movie flickered across the silver screen….