Owasco Lake, a hotspot for events up and down its shores, has attracted both people and wildlife with its magnetic natural charm. Its name comes from the Native American word “osco,” which means “the crossing place,” or “wasco,” which means “floating bridge” – both reflecting its important centrality.

Owasco is an intermediate Finger Lake in most aspects, smaller than the giants but larger than the minor lakes. The whole lake lies in Cayuga County, with Auburn at the northern end and Moravia at the southern end. One of the earliest settlements of the Cayuga tribe was located at the northern end. Its large drainage-basin-to-surface ratio means it’s highly loaded with nutrients. Here are its official stats, courtesy of New York State’s Department of Environmental Conservation: 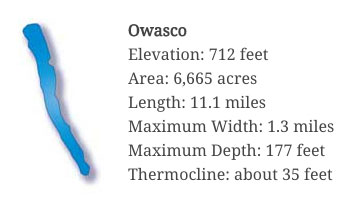 The northern end of the lake is the starting and finishing place for one of the nation’s largest team-only run-bike-paddle triathlons, the Great Race or Captain Myles Keogh Paddle, Wheel, and Run. It was named after a Civil War soldier who died at Custer’s Last Stand and was buried at Fort Hill Cemetery in Auburn. Teams from two to four participants start the relay with a runner, hand off to a biker, and end on a kayaker or set of canoeists to race for the finish. A celebration at Emerson Park with live music and refreshments follows. This summer will mark the 42nd year of the Great Race.

Emerson Park, named after Fred Emerson who donated the park, is home to the Auburn Little League, the Merry-Go-Round Playhouse, and the historic Emerson Park Pavilion. Visitors can stroll along the waterfront, swim, or enjoy the many recreational areas within the park. In addition to the Great Race, other special events that it hosts throughout the year include Winterfest, at which visitors can ride in old-fashioned horse-drawn sleighs along the lake, and the Prison City Ramblers’ annual Father’s Day car show that includes a mix of street rods, antiques, classics, and muscle cars. 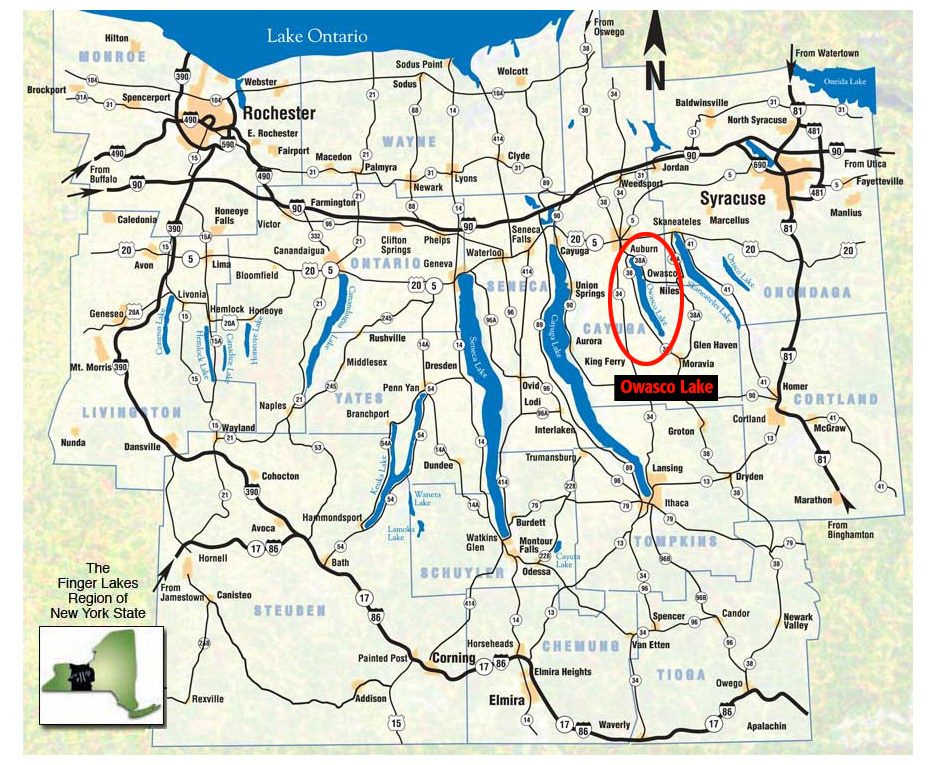 At the southern end of the lake sits Owasco Flats Nature Preserve, where one will likely see many important bird species that breed and rest here, including blue herons, tundra swans, and common loons. Cerulean warblers, the American and least bitterns, and bald eagles reside around the lake, and beavers and river otters have also occasionally been spotted at work in this floodplain. It’s free and open to the public year-round for paddling or exploring.

Fillmore Glen State Park is located just south of the nature preserve in Moravia and centers around a glen that feeds into the inlet to Owasco Lake. The park was named after Millard Fillmore, the 13th president, who was born in a cabin five miles away; a replica of the cabin can be found on the grounds. The park houses five beautiful waterfalls and the remains of an old dam.

In addition to President Fillmore, several other important historical figures lived around the lake at some point during their lives. John D. Rockefeller grew up in Moravia, and Harriet Tubman and William Seward, Secretary of State to President Lincoln and Johnson, had houses in Auburn. Harriet Tubman’s house is now a museum and national historical park, open to the public.

The best kind of fishing differs for each region of the lake. Notable in the south end are panfish, northern pike, and smallmouth bass, and the north end is remarkable for ice fishing, particularly for trout, panfish, and northern pike. Lake trout fishing is excellent throughout the lake, particularly during May, June, and September. The Department of Environmental Conservation stocks around 10,500 lake trout every year.

With so many cottages around the lake, gaining public access can be difficult. Sites are located on the northern end at Emerson Park and at the southern end along the Owasco Inlet, both of which also have public beaches. Visitors can rent boats, canoes, or kayaks to explore the lake at South Shore Marina in Moravia; many also choose to bike around the lake as the perimeter is ideal.