Canadice Lake may be the smallest of the Finger Lakes, but it’s rich in the wonder and mystery of its historical, untouched wilderness. From its longstanding annual strawberry festival to modern curiosities about what lurks in the woods surrounding the lake, it has enough character to justify the ironical Native American phrase behind its name – “ska-ne-a-dice,” or “long lake.”

As the third Finger Lake from west to east, it’s the shortest in length, smallest in area, and narrowest in width – yet it is the highest in elevation, isolating it in its remote pocket of nature. Because of its high elevation, it doesn’t require any pumps to transport its water supply, relying on gravity alone. It’s the only Finger Lake that lies completely in one town, Canadice, and it holds 11.5 billion gallons of water. Here are its official stats, courtesy of New York State’s Department of Environmental Conservation: 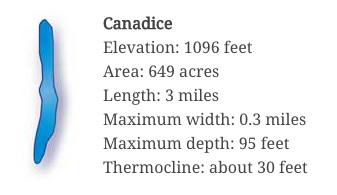 Every June since 1879, the Canadice United Methodist Church has hosted the Canadice Strawberry Festival. It was held on the lake at the Slouts’ resort until 1916 when the City of Rochester purchased all 7.2 miles of shoreline to use the lake as public drinking water. As Mrs. Maud Van Duyne wrote in her 1954 “A Brief History of the Canadice Strawberry Festival” article for The Livonia Gazette, Mr. Slout would greet the townspeople and ask if they would be attending the festival every year and made sure they all had a good time. Since 1916, it has been held at other homes and at the church itself.

The first white settlers around the lake arrived to farm in the first years of the 19th century. The area around the lake was known as the “stealth town.” In 1951, the last cottage on Canadice Lake, the Moose property, was auctioned off and then stripped of all buildings to ensure the purity of the lake’s water, though you can still spot some of the ruined cottage foundations around the lake. With Hemlock Lake, it serves as Rochester’s source of public drinking water. The area is now quite remote and similar to the wilderness of regions like the Adirondacks; the woods surrounding the lake are known as second-growth forests, which means they were old farmland reclaimed as forests.

Like Hemlock, to which it is connected through a spillway and hiking trail, its shorelines are undeveloped and its wilderness preserved. It shares the same activity restrictions as Hemlock Lake – boats limited to 17 feet and 10 horsepower, and swimming completely prohibited – to protect the water supply, and access is completely forbidden in the northernmost part of the lake. They also share the Hemlock-Canadice State Forest. Unlike Hemlock, there are no facilities at all around Canadice Lake. 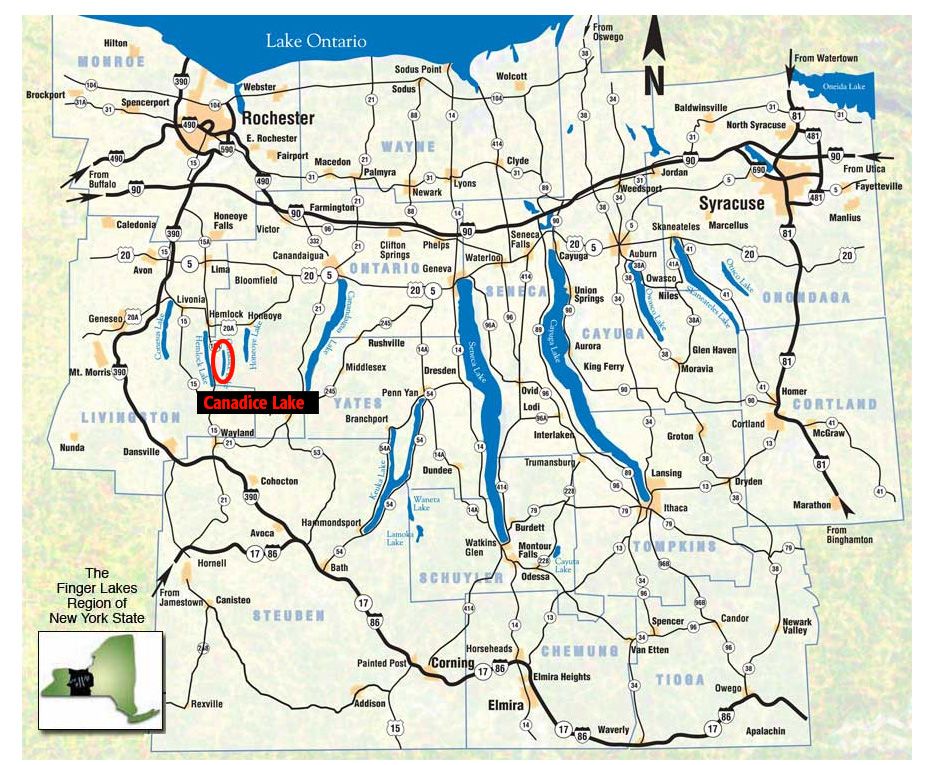 The eastern and western shores are rather steep, which makes it difficult for much vegetation to grow there. This steepness also protects the lake from wind, making it calm for boaters most of the time. It’s a popular spot for kayaking, and Canadice Lake Outfitters serves as a rental outlet. Every Thursday at 6:30 p.m., they offer guided tours in kayaks or on paddleboards through the lake to learn its history while enjoying its calm beauty. Wild roses and raspberries can be found along the edges of the lake.

Rumors about bigfoot sightings around Canadice Lake have circulated from time to time. A 2013 article in Democrat & Chronicle written by Leo RothSports asserted that the Northern Sasquatch Research Society had been doing research around the lake after two fishermen supposedly saw a creature resembling bigfoot that left unidentifiable footprints at the north end. Many have also claimed to have seen cougars roaming the area.

Other interesting creatures make their homes around the lake, including bald eagles and waterfowl. In addition to plenty of lake trout and smallmouth bass, large snapping turtles have been seen lurking just beneath the surface. Other fish include warm- and cold-water varieties like brown and rainbow trout, chain pickerel, brown bullhead, bluegill, black crappie, and yellow perch. The best fishing spots are off the trails on the west side, and boat-launching access is provided on the eastern shore.