Flowing south to north, Conesus is the westernmost Finger Lake, at 42 degrees 46 minutes north latitude and 77 degrees 43 minutes west longitude. Though the lake formed some 10,000 years ago, the first settlement around the lake was established in 1792. It holds around 48 billion gallons of water. Compared to the other Finger Lakes, it’s on par in terms of height and width, but it’s one of the smaller Finger Lakes in terms of area and length, and it’s the second shallowest. Due to these lower statistics, Conesus is considered one of the minor Finger Lakes. Because of its shallow nature, it also retains its water for the second shortest amount of time out of all the Finger Lakes before flowing out through its outlet into the Genesee River. Here are its official stats, courtesy of New York State’s Department of Environmental Conservation: 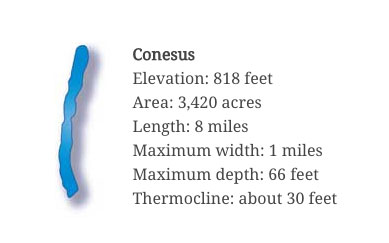 But just because it’s smaller doesn’t mean it’s not as striking as the other Finger Lakes. Every year on July 3 at 10 p.m., residents around Conesus Lake participate in the old Seneca Indian tradition of setting flares all around the shoreline. The Seneca Indians would do this to celebrate the beauty and abundance of the lake. In fact, the name “Conesus” comes from the Native American word for “always beautiful.” (Other accounts claim it comes from the word for “berry place” after the sheep berries that grew along the shore, or that it meant “medicine lake.”)

Conesus Lake almost always freezes over in winter, making it ideal for ice fishing, skating, or snowmobiling. Fishing tournaments like the Tuesday Night Working Man Tourneys are popular in the warmer months. Vitale Park hosts free summer concerts on the lakeshore every Sunday, including music from well-known local Finger Lakes bands like the Sim Redmond Band. Long Point Park offers a beach with a lifeguard for swimming during the warm season along with other park facilities. 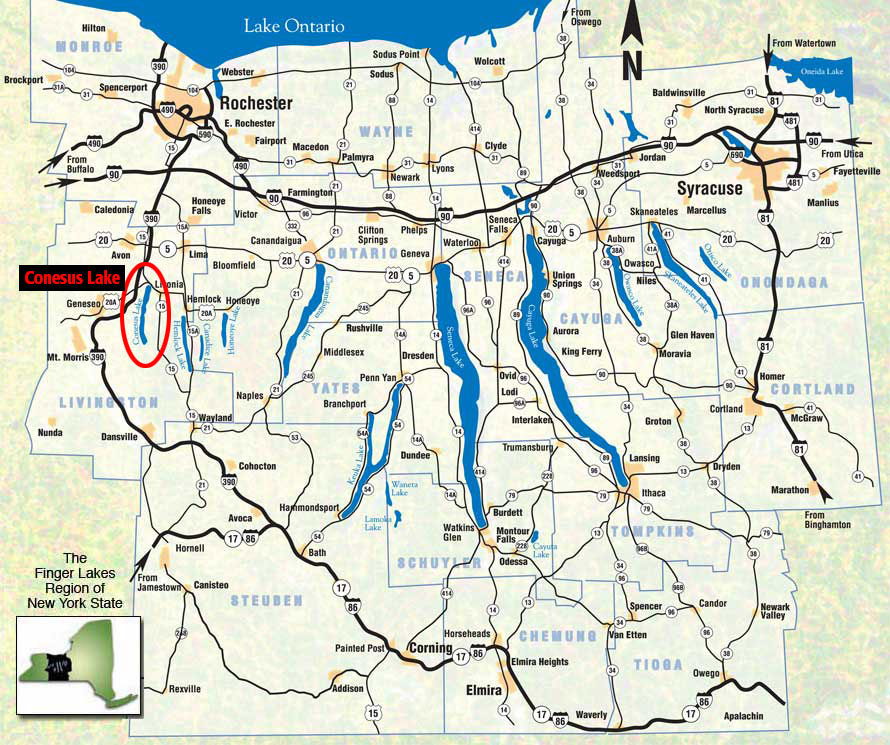 Beautifully mysterious turtle-like stones can also be found at Conesus Lake, or Conesus stones as they are known in many parts of the world. As Mrs. Joseph Lang wrote in her 1962 “Conesus Lake Folklore” article for The Livonia Gazette, these stones were formed in the ice age when glacial debris 10,000 feet thick created dams that built the Finger Lakes, and they’ve even been found as far as Siberia and Iceland.

Conesus Lake is also home to the legend of the Phantom of the Lake, which has been circulating for over 150 years. Native American Chief Big Tree, a leader in making treaties during the American Revolution, was asked to go to the towns along the Genesee Valley and gather Senecas to join the cause. Shortly after his visit in 1778, he died. As the legend goes, a Native American chieftain ghost has been sighted through the fog over Conesus Lake in a birch bark canoe, calling for help. Some stories say he is Chief Big Tree, while others say he is one who ran off with a warrior from another tribe and came back to look for his wife. In the 1950s, this legend was revealed to have been created by Colonel S. Tooey, who was inspired by the fabrication of the Silver Lake Sea Serpent legend. It has also been rumored that the U.S.S. Lady of the Lake, a schooner that fought on the Great Lakes during the War of 1812, lies at the bottom of Conesus Lake (though this, too, is likely fabricated, as the lake is rather shallow).

Conesus Lake touches the towns of Livonia, Groveland, Geneseo, and Conesus and feeds the public water systems for the villages of Avon and Geneseo. It overturns its water twice yearly during spring and fall. On a trophic scale, one that measures how productive a lake’s ecosystem is, Conesus ranks high, meaning it has plenty of nutrients to support plant life. For the eager fisher, the fish most common to Conesus Lake include warm-water species such as alewife, bluegill, brown bullhead, largemouth bass, northern pike, pumpkinseed, smallmouth bass, tiger musky, walleye, and yellow perch (courtesy of New York State’s Department of Environmental Conservation). Access to Conesus Lake by boat can be reached through the municipal launch at Conesus Park.

07/19/2018 The Hunt family has just installed five electric vehicle chargers in their parking lot at Hunt Country Vineyards on Keuka Lake, which makes…