What drama. A pair of big and handsome red tail hawks have commandeered the top of a nearby large pine tree as a lookout for prey. Their presence has not gone unnoticed by the bluejays. And a robin. For the blue jays, harassing the hawks seems to have become a ritual to achieve nomination to the avian hall of fame—or at least to gain some cred with the local flyers.

The red tails often take up their lookout before sunrise, sometimes together, sometimes individually. Perched at the very top, prominently displaying themselves, their presence can’t be missed. Depending on family business, the jays arrive around 7 a.m. to inform the hawks they should leave.

And the fun begins. The first time the raucous jay cries caught my ear, I looked out and saw one jay. It fearlessly buzzed the lone hawk, nearly striking it. The hawk, pivoting its head almost 180 degrees kept a close eye on the jay. After about five minutes the jay flew off only to return a half hour later.

The next day two jays showed up. They meant business. Two hawks, strategically positioned back to back, faced them off. One jay would buzz by, land on a branch to the hawks. There it would bounce up and down on the branch screeching in a display of anger. Then the other jay would buzz by, sometimes striking the hawk. Eventually the harried hawks flew off.

A few days later, a robin joined in. Community service perhaps? Though the robin vigorously protested to the hawk and even struck it once, the hawk seemed unconcerned and groomed itself, ignoring the robin. Surprisingly absent from this struggle were the crows. I think the hawks had positioned themselves outside of the local crow jurisdiction.

And not all blue jays concerned the hawk. The following day a different set of jays showed up. How do I know? Because they’d buzz the hawks, keeping at least five feet away and land on branches that were 15 to 20 feet away. And after a few half-hearted passes, they’d flee into a distant set of trees to restore their courage. Half an hour later, they’d return, make a few more half-hearted passes, and flee again. Not like the earlier brash jays who fearlessly knocked into the hawks. Maybe they were juveniles learning the techniques of hawk harassment. 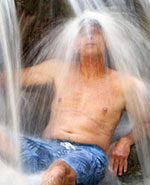