As a photographer, I’m always looking for something new and different to photograph. That’s quite a challenge nowadays when everybody takes pictures of anything and everything with their cell phones. But the light finally went on. I discovered a new and overlooked subject to photograph. And it only took a few decades to realize it had been right in front of me all along – some might say I was ahead of schedule.

It all started with butterflies. I’ve been photographing them forever. And the best way to photograph butterflies is to go to their food source – plants.

The ever-popular monarchs love milkweed, and its cousin butterfly weed. Other butterflies enjoy Joe Pye weed and ironweed. And many butterflies love thistles – the bane of farmers everywhere. When photographing butterflies in late summer, I sometimes became covered with burdock seed heads that were only slightly less dangerous than the medieval weapons (morningstars) they resembled, or the equally annoying beggar tick seeds. And if the dog was along – well that meant an evening of untangling furry burr snarls.

Clearly, a message was being sent to me. But as the dog aged and went to doggy heaven, and I progressed from a Beatles mop to a hairless dome, the message remained unopened.

Oblivious to the obvious, I continued photographing butterflies. One day, out of the blue, the message finally broke through the skull bedrock. It dawned on me (do you now understand that I can be a bit slow?) that the plants the butterflies were feeding on were more interesting than the butterflies – and that many of them had the word “weed” in their names. So, I began to research other weeds – mainly big ones, waist high or taller.

So for the past couple of years, instead of butterflies, I have been photographing weeds. Often I take a four-foot piece of white foam board with me into the field, but only if the sought after weeds are near a road and the weather is cooperating. Sometimes I bring the weeds indoors, where I can better control the situation.

Now I’m left to wonder what other “weeds” in my life I’ve been overlooking. 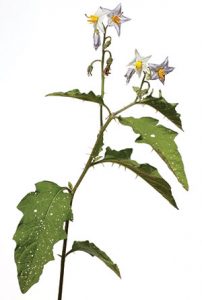 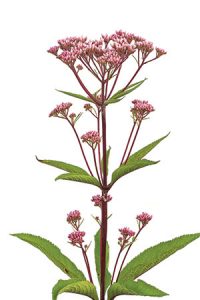 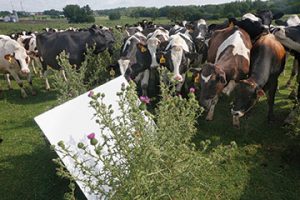 Carrying a large white background board and camera gear, I entered the pasture to photograph bull thistles — not to entertain cows. The cows were distant, so I ignored them. I mounted my camera on the tripod and composed the bull thistle picture. With the camera set to a 10-second delay, I pressed the shutter button, grabbed the foam board, quick-stepped into position behind the thistle and held up the foam board behind it until the shutter fired.

I repeated this dance several times. I was in the zone, so engrossed I completely shut out external distractions. Eventually, I returned to reality and looked up to discover I was in the center of a cow circle. Unbeknownst to me, a small herd of cows had snuck up, completely encircled me, and watched as I took pictures. I had become their morning entertainment. Not one to cut short a show, I quietly removed my camera from the tripod and stepped back. Most of them stepped forward to inspect my foam board and tripod. A few checked me out, too.

We all ordered a DiPacific specialty, the club sandwich. Crisply toasted quarters of white bread between stacks of mayo-slathered ham, beef, tomato and lettuce…