Narrative paintings tell stories and evoke universally understood emotions, while the Contemporary Realism art movement has brought back in vogue traditional, finely-detailed works depicting real life people or scenes. Both are polar opposites of modern abstract art with its own visual language of color, shapes and forms open to wide-ranging interpretations.

“Taking my art to this next level is exciting in part because I am now creating portraits or narrative paintings that can be appreciated by a wider audience,” she says.

Her paintings are hung and sold at Artizanns in Naples and the Pat Rini Rohrer Gallery in Canandaigua where Lane also teaches workshops. “Nancy is a sought-after teacher in watercolor and drawing skills,” says Rohrer. “I have watched her work over the last few years, observing her growth and masterful touch.”

As a child, “I was kind of horse crazy,” Lane admits. “I desperately wanted one.” She drew them instead – all kinds, colors, shapes and sizes. Her grandmother, a hobbyist whom Lane characterizes as a “Sunday painter,” taught her to draw a horse’s head around age 6 or 7. By 8, her friends were clamoring for horse pictures. By 15, her grandmother sought art advice from Lane.

Her Webster, New York, childhood was a happy one. The family played music and sang together, camped and travelled – including a memorable cross-country adventure when she and her three siblings skipped school for a month.

In 1982, after graduating with a Bachelor of Fine Arts degree, Lane married high school sweetheart Mark Obbie, a writer. The young couple moved to Warren, Ohio, where Obbie had a newspaper job waiting. He surprised his bride by renting an art studio. Lane took freelance illustration jobs and designed paste-up ads, drawn in pencil in those days, typeset and laid out precisely on a board to be photographed. Mastery of math calculations – to make it all fit – trumped artistry.

In 1983 Obbie took a better job in Texas at the Houston Post. Lane worked for an advertising agency, creating a range of printed materials such as annual reports, brochures and signs. The couple had a daughter, Raema, in 1986. After moving again, this time to Dallas and welcoming son Dale, Lane started a home-based freelance illustration business to be with their children.

Home eventually became Ossining, New York (north of New York City) for a decade. Obbie commuted to Manhattan and they were closer to extended family. Computers and the advent of the Internet made Lane’s freelancing seamlessly portable.

Lane illustrated her first children’s picture book in 1998. She and her sister Judith wrote, and Lane drew, Buster, Where Are You? a tale about a little girl and a dog. It was sold to a small publishing house during a writers and illustrators conference.

Soon after, the same publisher hired her to draw pictures for another storybook, Rico’s Hawk. Lane also illustrated educational and religious children’s books when she signed with an agent who represented her work directly to publishers.

One career highlight for Lane was illustrating animal picture books for The Gryphon Press, an award-winning children’s book publisher with a catalog emphasizing the human/animal bond. The theme resonated with Lane, an animal lover with two rescue dogs.

Lane was in demand when the couple moved nearer to their roots in 2004. They bought a Canandaigua home surrounded by bucolic wooded acres offering her endless natural scenes to paint. While her main concentration was illustration, Lane was an accomplished watercolorist and had never stopped painting.

The trend in children’s illustration was moving toward simpler, cartoon-like images and away from Lane’s signature style: realistic and painterly pictures. In 2009, she felt a stronger tug toward painting, even picking up oils again for the first time since college. Lane challenged herself by taking workshops taught by nationally esteemed artists including Mary Whyte (“perhaps the premier American watercolorist of our time,” says Lane) through the Rochester Art Club, a professional membership organization.

“I’m transitioning my career away from illustration toward painting my own ideas, as well as commissioned paintings,” says Lane now. “As an illustrator I told stories through my pictures. In my new work as a painter, I continue to enjoy telling stories through my portraits and landscapes.”

In a way Lane has come full circle, back to her intense joy of perfecting those glorious horses over and over until they appear to canter across the canvas just as muscled and magnificent as they are in real life. 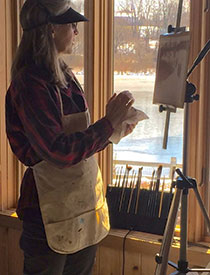 For information about Nancy Lane’s watercolor or drawing workshops at Pat Rini Rohrer Gallery, visit prrgallery.com. Her work is featured in the 34th annual Adirondacks National Exhibition of American Watercolors from August 6 through October 9, 2016, at View in Old Forge. Visit viewarts.org for more information.

02/12/2019 story and photos by Nancy Napurski Some people are born to be artists, doctors, or musicians. Nick LaBorde, a Finger Lakes native, was…