Story and photo by John Adamski

The common garter snake, also known as a garden or grass snake, is native to North America and is found throughout the Finger Lakes Region. Most have a pattern of longitudinal yellow stripes on a dark brown or green body and average around two feet in length. Females are larger than males and a few can grow to almost four feet long. During the summer, the garter snake is most active in the early morning and late afternoon. In cooler weather, it is more active on warm afternoons. Garter snakes are not aggressive and rarely bite people, but they will if they’re antagonized enough. While their bite can be toxic to amphibians and prey like mice and other small rodents, it is not dangerous to humans—even though it might cause a slight itching or burning sensation, or mild swelling. They can also secrete a foul-smelling fluid from anal glands if they are handled. Contrary to popular belief, snakes are not the least bit slimy but rather dry and smooth to the touch.

Garter snakes are at home in fields, forests, marshes, meadows and even backyards. They feed on frogs, toads, rodents, insects and earthworms. Animals that prey upon garter snakes include foxes, hawks, raccoons, snapping turtles, wild turkeys, larger snakes and even fish like northern pike, bass, and catfish. Garter snakes are ovoviviparous, which means that fertilized eggs hatch within the female’s body and babies are live-born in her den. 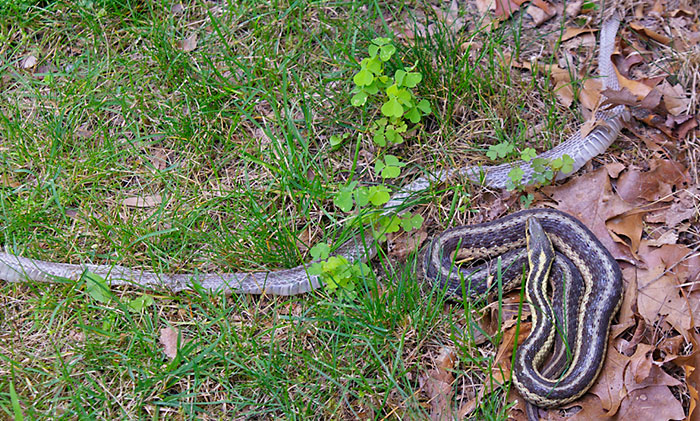 Like all reptiles, garter snakes are cold-blooded, meaning that their body temperature varies and matches that of their surroundings—and so body temperature plays a role in the level of their activity. On cooler days they can be slow and lethargic, and less likely to be predatory. When cornered, they may assume a defensive posture by coiling up to give the appearance that they are getting ready to strike, but that is usually a bluff. Given the option, they would sooner slither away and be left alone.

And like all snakes, the garter snake outgrows and sheds its skin at least several times a year. In younger, fast-growing snakes, this process may occur every two to three weeks during the summer and last from a couple of days to a week or more. If you should encounter a garter snake with blue eyes and muted body coloration like the one in the photo above, that is an indication that it is getting ready to shed. When any snake sheds, it also sheds the skin that covers its eyes. When shedding is complete, its body colors are much more vibrant.

Most people become unnerved when they encounter a snake of any kind for a number of reasons: It is almost always unexpected; the question of whether or not it is venomous; and of course the biblical connotation that Satan often appeared in the form of a snake and so they are thereby evil. But in reality, the garter snake is beneficial to any yard or garden because it keeps the mouse and small rodent population in check. While the impulse might be to kill any garter snake that you may encounter, it’s best to leave it alone and let it do its job. Every creature plays a role in nature.

John has been a published writer/photographer for 40 years and is a 4-time award-winning member of NYSOWA. Two of those awards were for these “Life in the Finger Lakes” articles: Plight of the White Deer and From the Brink of Extinction.