The Finger Lakes region boasts a good many American firsts. The engaging list is long and impressive.
• celebration of the nation’s first recognized Memorial Day (1866), in Waterloo
• the first medical degree received by a woman in the U.S. (Elizabeth Blackwell at Geneva College in 1849),
• the first light bulbs in the country; hand-blown in Corning for Thomas Edison (1890s) and
• a number of national firsts credited to aviation pioneer Glenn Curtiss of Hammondsport.

Rushville, a sleepy little village straddling the Yates and Ontario county lines just east of Canandaigua Lake, boasts a proud first of its own. Local Historian Robert Elbridge Moody’s 1991 book, fittingly titled America’s First Rushville, highlights that modest fact along with a rich and complete history that would honor any community.

A number of towns named “Rushville” are scattered about (Indiana, Nebraska, Ohio, among them), but in 1819, the hamlet of Federal Hollow became the nation’s first community with that moniker. Local physician Dr. Ira Bryant suggested the name change in honor of Dr. Benjamin Rush, a much-admired hero of the American Revolution. A founding father of the United States, Rush had been a Surgeon General for the Continental Army and was a signer of the Declaration of Independence – his signature appears just above Benjamin Franklin’s. Although Dr. Rush had no local connection, he was a personal hero of Bryant’s and the suggestion was readily accepted.

A Celebrated Man and His Mission

Nonetheless, a favorite son with Rushville roots would go on to make an impact. His name is preserved in the local school district, and on historical signs and markers throughout the village – Marcus Whitman.
Whitman was born in 1802 in a frontier log cabin in Federal Hollow. He trained as a physician, apprenticed with a local doctor, then set up a practice in nearby Steuben County. All the while, the able Whitman had a longing for the ministry. Eventually melding this urge with his medical prowess, he and wife Narcissa set out by wagon with an intrepid party to establish missions in the far west.

After an arduous trek, the Whitman party arrived and helped settle the Oregon Country. The determined doctor ministered to the spiritual and medical needs of the pioneers, as well as to the local Cayuse and Prince Nez tribes.

In 1847, tragedy struck. The superstitious Cayuse, leery of the doctor’s “magic,” blamed Whitman when a severe epidemic broke out. Many tribesmen perished. When their community was attacked by the Cayuse, Marcus and Narcissa were slain, along with another dozen settlers. History recorded this event, far from the quiet Rushville hills, as the “Whitman Massacre.” A bronze statue of the noble pioneer (clad in buckskin and carrying a bible) stands today in the foyer of the Washington state capitol in Olympia.

A Little History, A Little Humor

For a community of its size, Rushville has a few quirky tales that deserve to be told and retold. The first goes back to a Fourth of July celebration in 1807, when Rushville still bore the name Federal Hollow. Certain citizens determined that firing a cannon might add a nice touch to the annual revelry. Without a field piece of their own, a clandestine group trekked the 10 miles to Canandaigua in the dead of night, and procured one from a storage place used by the local militia. Brought back to The Hollow, it was secretly moved from barn to barn to avoid detection until the big day arrived.

Hearing rumors of the stolen cannon’s whereabouts, a cadre of irate Canandaiguans appeared on the fourth demanding its return. They were ignored by the cannon’s escorts until, after many toasts and orations, the piece fired 17 booming salutes. The cannon was later returned to Canandaigua, peacefully and with no further repercussions.

The details of another story are vague (and perhaps embellished) but no less entertaining. Some time ago, two elderly sisters lived in a home on Main Street, just at the spot where Yates and Ontario Counties rub elbows. The county line ran through the middle of their house and separated the upstairs bedrooms of the sisters. Based on that, each was required to vote in a separate county. When officials found that the ladies were sleeping on the “wrong” sides of the county line, they were required to switch bedrooms to maintain their voting status.

Another oddity is visible today as a driver makes a turn in the heart of town. Rushville is believed to be the only incorporated village in New York State with no four-corner intersection at its center. Its two main arteries, Main and Gilbert Streets meet at a “T.”

Yesterday and Today on Main Street

As with many other Finger Lakes villages, Rushville had its golden days when businesses thrived and wagons rolled through busy streets. It also suffered devastating fires, but rebuilt each time with vigor. Some of those structures survived with intact architectural features appreciated by those attuned to period detail. The 1883 Rushville Opera House building is still in use, although its ornate upstairs theater is now long vacant, and some Victorian features have been lost to time. Remaining are its imposing mansard roof, unique triangular dormers, and some cast-iron décor.

Next to the old opera house stands Loomis Memorial Hall, completed in 1898. Today it serves as the village hall and home of the Rushville Historical Society. In the village meeting room is “The Wall of Honor,” a tribute to area citizens who served in the United States Armed Forces, from the American Revolution to the present day. With the efforts of historians, volunteers, and family members the society has accumulated images in remembrance of almost 650 veterans: photographs, sketches, even pictures of headstones. Framed images are accompanied with stories and personal profiles.

There are a number of yearly holiday events in the village, but perhaps the most anticipated is Rushville Community Days, a long-running tradition on the first weekend of August. Spearheaded by the Rushville Lions Club, the two-day festival on Main Street features lots of food and fun: a pancake breakfast, bake sale, games for the kids, yard sales, a fish fry, and lively contests.

On quieter days in any season, the Moody Hiking Trail begins at Main Street and takes wanderers on a pleasant trek through woods, fields, and along a rocky creek. A short walk around the corner on Gilbert Street is Stash Art Works, a studio where artist Mark Stash (also the editor of this magazine) fuses dramatic light and color into his interpretations of wildlife and the natural world. Much of his inspiration comes from the surrounding Finger Lakes countryside.

A town’s heartbeat can often be tested in its eateries. Opposite of Village Hall is the Lunch Box Restaurant, a popular gathering spot for good meals and conversation. The café has a continuing tradition going back to the 1930s when it opened as the Brunskill Sweet Shoppe. Present owner Kathy Rilands prepares great food using local farm products that range from fruits and meats to eggs. Her home-baked cookies and muffins alone make the lunchbox a worthy stop. As one online reviewer raves, “The gourmet cupcakes, OH MY!”

Memories of Marcus and Narcissa Whitman are woven forever into Rushville’s historical fabric. Their daring and dedicated trek as medical missionaries from the Finger Lakes Region to the Pacific Northwest in the 1830s is remembered and commemorated at both ends of their epic journey.
In 1984, an energetic group of local runners and supporters decided to honor the Whitmans and their legacy. A challenging relay run was planned from the Marcus Whitman Central School in Rushville to the campus of Whitman College in Walla Walla, Washington, an institution established as a tribute to the Whitmans and their 19th-century Christian mission.

The Rushville community stepped up with donations and fundraisers; teams of runners were recruited, and organizational meetings were held. At 9 a.m. sharp on June 30, 1984, the first runner (baton in hand) headed west from the school parking lot.

For the formidable venture, runners were divided into teams supported by cars and drivers. Three seven-member teams ran alternating three-to-four-hour stints, passing the baton from runner to runner at one-mile intervals. In less than three weeks, the 2,600-mile journey ended when the final runner triumphantly arrived at the Whitman College quad. Mission accomplished. 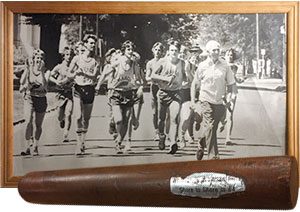 This photo was taken by John Froschauer in 1984, a photographer from the Walla Walls Union Bulletin in Washington. At this point, the finish line is about 35 yards away. The runners in this photo (in alphabetical order) are Shawn Briggs, Melissa Brown, Wendy Brown, Krista Clark, Jake Cornelius, Vicki Dygert, Shelley Eddinger, Kristin Francisco, Rex Goodenow, Beth Hamill, Randy Johnson, Brad Landess, Jenny Maas, Amy Owen, Becky Payne, Barb Peterson, Jenny Smith, Dave Stell, Tracey “Half Pint” Thornton and Tim Whiteman. Ken Seeling (not shown) was taking videos from the roof of a nearby vehicle. Remer Hilton (69 years old at the time) is leading the group and holding the wooden baton (pictured).

At a basic meal, the entrée dictates the type of wine. Whether white or red, red or white, one or the other will usually…