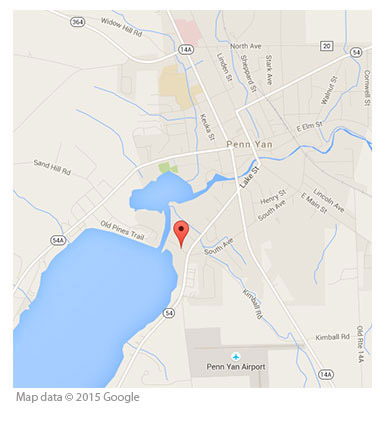 Keuka Lake Hotel LLC received final site plan approval at the Penn Yan Planning Board’s meeting Monday, May 4. Developer Chris Iversen celebrated on May 11 with a ceremony on the site of the proposed Hampton Inn Penn Yan, at 110 Mace Street, on the north end of Keuka Lake to break ground for the project.

Construction is set to begin immediately on the 72 room lakeside hotel and is expected to be completed for opening in the summer of 2016. The four-story hotel will include meeting spaces, exercise room, and lakefront patio bar and indoor pool.

The hotel site was formerly the home of the Empire State Wine Company, established in 1886 until it was purchased by the American Legion in 1956. The Georgian Revival stone building was demolished in 1990. Numerous development ideas for the site have foundered since that time. The current effort began with the developer’s purchase of the site in 2013. Village and County officials welcomed the plans for the proposed lakefront hotel, citing the anticipated attraction of visitors and business group meetings to the Penn Yan area.

The project is the recipient of a $750,000 incentive award from the NYS Regional Economic Development Council’s latest round of funding. The agency provides resources for projects focused on community development, job creation, tourism and waterfront revitalization. Once opened, Hampton Inn Penn Yan will provide an estimated 25 new jobs to the Penn Yan area.

The Hampton Inn Penn Yan will be locally owned and operated under franchise license agreement with Hampton Inn, a part of Hilton Worldwide, a leading global hospitality company. Hampton Hotels are designed to accommodate both business and leisure travelers with amenities like complimentary, hot breakfast with fresh-baked waffles, complimentary Wi-Fi and friendly customer service, which contribute to Hampton ranking as a leader in its market segment. The hotel will additionally feature Hampton’s Perfect Mix Lobby, designed with a variety of seating and lighting options as an extension of the guestroom.