Downtown Ithaca invites you to attend one of its greatest wintertime spectacles — the annual Ice Festival. This beloved three-day, multifaceted celebration, now on its 11th year, pairs a nationally-sanctioned and highly competitive ice carving competition featuring some of the country’s best carvers with a day-long chowder cook-off where local restaurants aim to garner public votes for their freshly prepared stock concoctions. 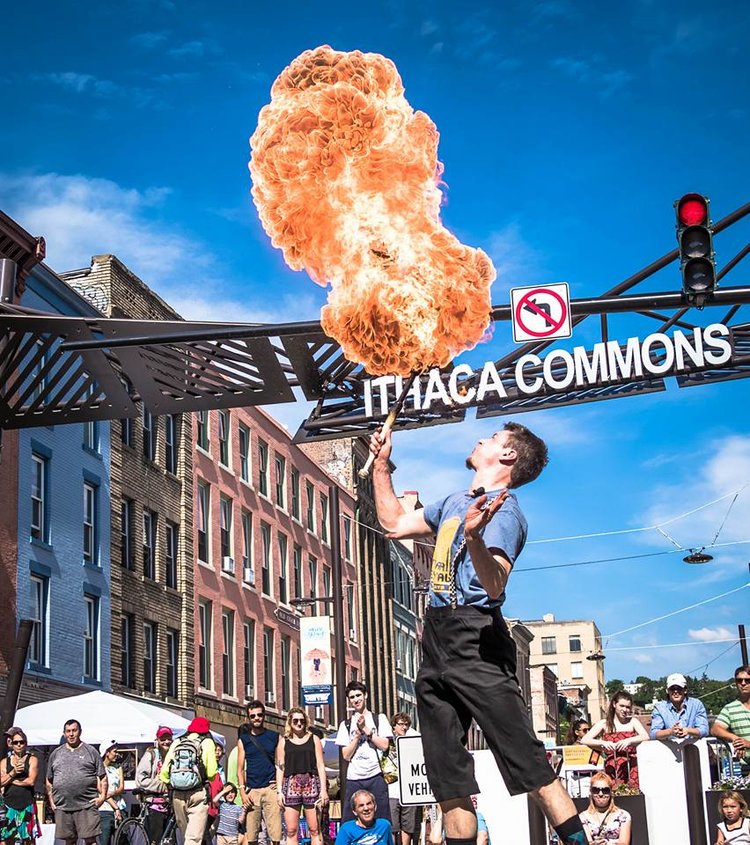 The multi-day event kicks off Thursday, Dec. 7 from 5 to 9 p.m., with the opening of the ice bar, a serving station made completely out of ice blocks, on The Commons. Guests will be able to enjoy a sampling of frosty beers from Dryden’s Bacchus Brewing Company and a variety of tasty wines from Treleaven Winery based out of Kings Ferry. Ice bar guests can also sip non-alcoholic hot cocoa during this happy hour style activity. At 6 p.m., Nate the Great entertains the crowds with his impressive juggling act and Cosmic Karma Fire Dance returns to astonish the audience with its flame-fueled performance.

Joining these crowd-pleasing events and new to Ice Fest this year, DJ Ha-meen will be playing some booty-shaking tunes as part of Downtown Ithaca’s inaugural Silent Disco happening on the Bernie Milton. Silent discos offer guests the freedom to rock out and dance to music broadcast directly to their ears, keeping the noise down for the local residents. Bring your ID to obtain a pair of special headphones and enjoy this incredible dancing experience.

During the second day of the festivities, the Commons will be filled with masterfully skilled ice carvers using chisels, chainsaws, and blowtorches to craft exquisitely detailed multi-shaped and -sized ice sculptures. DJ Gourd will perform and MC the exhilarating Speed Carving Challenge when roughly a dozen of the country’s finest ice carvers, including national, world, and Olympic champions will go head-to-head, racing against the clock to complete detailed sculptures in just 20 minutes using only limited tools. This high stakes challenge is scheduled for 5 to 9 p.m., and the ice bar will be open during that time, too!

For Saturday’s activities, you’d better prepare your eyes and palate for a surreal experience. From 9 a.m. to noon, the carving experts will once again compete head-to-head, this time for the Carve and Deliver competition. During this contest, the competing carvers must craft and deliver an ice sculpture to a downtown location in just three hours. From 2 to 6 p.m., the sculptors will then compete in the final leg of the competitions: the Two-Block Showpiece Challenge. This event separates the amateurs from the pros as the carvers will attempt to garner the most points by crafting intricate and dramatic large-scale pieces. 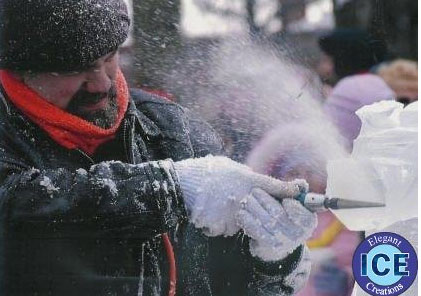 Beginning at noon, experience the 8th Annual Chowder Cook-Off, where festival-goers can sample chowders and bisques of all varieties — seafood, meat and vegetarian — served by many of the area’s best chefs. Recipes will range from the traditional to the gourmet and exotic. This afternoon competition ends at 5 p.m.

Chowder newcomers include Downtown Ithaca’s Monks on the Commons, serving a vegetarian chowder, Luna Inspired Street Food with a seafood concoction, downtown’s newest, yet-to-be-opened restaurant, Ból is presenting a meat and a seafood dish, and The Piggery, which will serve a four bacon chowder using fresh pork and other ingredients from its Trumansburg farm and from other area farmers. Cornell Catering is also entering Chowder for the first time and will present a vegetarian and a seafood chowder option.

These rookie participants will cook-off against reigning 2016 champs Red’s (best seafood), Mix (best meat) and Green Star Cooperative Market (best vegetarian) and many other restaurants. Make sure to walk The Commons, Aurora, and Cayuga streets and the Dewitt Mall to locate some of the participating establishments. Tasters will vote on their favorite chowders in each category (veggie, meat, and seafood) and one lucky chef is awarded the coveted title of Chowder Cook-Off Champion.

As you’re sampling the variety of tasty chowders, enjoy live entertainment from Fall Creek Brass Band, the Next Jennaration dance group, and the Ithaca Tuba Christmas concert at the Bernie Milton Pavilion in Bank Alley on The Commons. The performances start at 1:30 p.m. and end around 5 p.m. on Saturday.

While you’re visiting downtown Ithaca during Ice Fest and Chowder Cook-Off, satisfy your holiday baked goods craving on Saturday at the Habitat for Humanity’s Annual Cookie Walk. This cookie extravaganza returns to Center Ithaca from 10 a.m.-2 p.m., the ice bar will open from noon-5 p.m., and the Mt. Pleasant Dog Sled Team will be greeting attendees from 2-4 p.m. on The Commons. At Dewitt Mall, just around the corner from The Commons, visit the Buffalo Street Books Fair from 10 a.m. to 3 p.m. Hundreds of top-selling novels, many of them penned by local authors, are available. A portion of the sale will benefit a local library.

06/25/2020 New changes to Saturday, Sunday and Wednesday markets For the first time in it’s 47 year existence, the Ithaca Farmers Market has just…