It is yet another gray, cloudy morning as I make my way out of Ithaca and west toward Schuyler County. I’m up earlier than usual and meet the sun as it struggles to rise and break through the white haze of clouds settling in the valleys between Odessa and Watkins Glen. With exactly three months until I graduate from Ithaca College, I’m utilizing my free time to experience the Finger Lakes in new ways. Today, I’m looking forward to spending a quiet morning admiring the gorges and downtown area of Montour Falls. 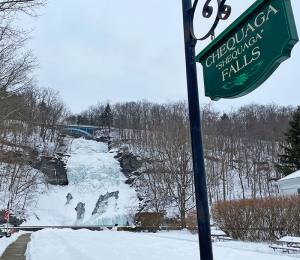 The village is named after an 18th-century Seneca Native American matriarch and nicknamed the “Valley of Tumbling Waters.” The area is home to picturesque natural attractions, local businesses and historic sites on West Main Street. The downtown storefronts are inviting, but I’m easily distracted by the grandness of the waterfall straight ahead of me. Like a bird perched over its nest, the cliffs of She-qua-ga Falls seem to keep watch over the entire village.

At 156 feet tall, the cascade looks like it could barrel down and flood downtown in a snap, but winter temperatures have frozen the rushing rapids beneath thick gray caps of ice and snow. A thin stream in the middle of the falls has wriggled from the grip of the ice and flows freely to the pool below. Though the falls are full of water, they are nearly silent and completely still, as if frozen in time. I turn to go downtown but notice a unique sign at the edge of the viewing park. It reads “She-Qua-Ga Tumbling Waters: A Sketch Now in the Louvre.” After further research, I discovered King Louis XVIII painted the falls before he became king of France and the piece is displayed at the Louvre. How random!

Downtown, I pop into Paradiso’s Village Bakery for a hot chocolate. The cafe has a modern country feel. It’s the perfect quick stop before I continue toward Watkins Glen to check out Aunt Sarah’s Falls. This steep waterfall has almost entirely frozen over and flows into the icy canals of Catherine Creek. In the distance, the creek empties into the dark, open waters of Seneca Lake. 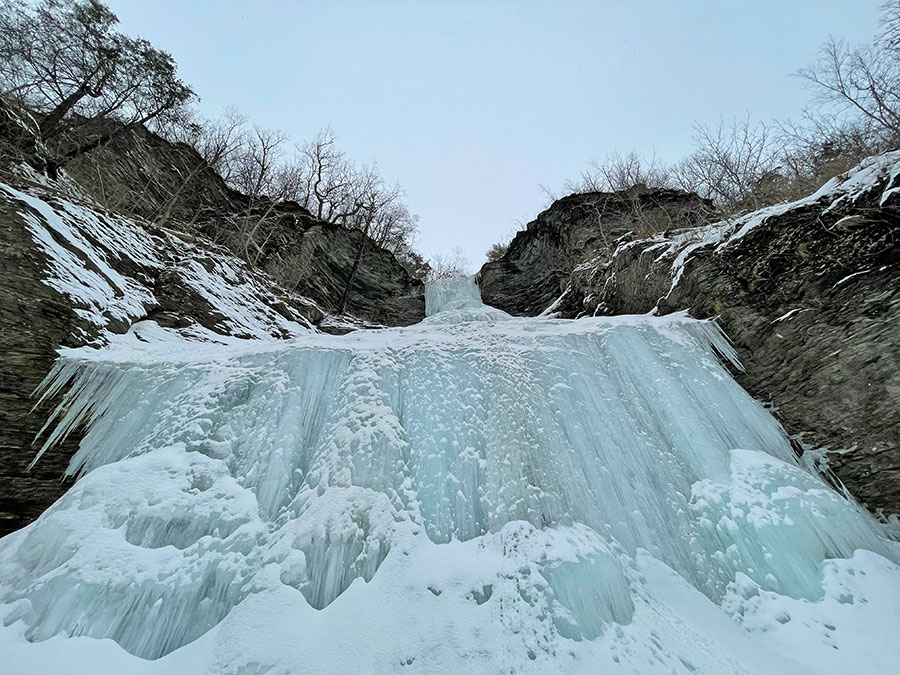 Large, puffy snowflakes begin to fall quickly as I stand beneath the falls. I don’t want to get caught in the flurry, so I get back on the road toward Ithaca. The winter weather and season cut my trip short today. I’d hoped to also make it to Eagle Cliff Falls, a short gorge hike in Havana Glen Park, but the park was closed for the season. The spring months will hopefully bring an end to the snowstorms soon so I can make my way back to Montour Falls.

10/17/2018 Story and photos by Gabrielle L. Wheeler Of late, I have done an immense amount of soul searching. I feel like I am…