Don’t knock it if you haven’t tried it. After all, it’s possible that Keuka ice sleeping will replace the paleo diet fad and take the world by storm. But don’t count on it. Because, Ray, shown here, was not actually sleeping.

So what was he doing? Not being an ice fisherman, I could find out only by asking him.

Why are you laying down on the ice? He said he was looking down his ice hole.

Why are you looking down your ice hole? He wanted to see if there were any fish.

Were there any? No.

I wasn’t sure where this was headed but I was beginning to see the possibilities for a sitcom.

Ray seemed to read my mind and before I could ask another question, he sat up (with a sigh) and, with his small ice fishing rod in hand, patiently explained. He was looking through the hole to precisely place the lure either near a fish that he could see or in an area he thought a fish would like.

Ray said the water was perfectly clear and he could see to the bottom about 8 feet below. He also said that if you’re sitting in the dim light of a sealed ice tent you can see down to the bottom without laying on the ice. Ray was working about six holes but had only one tent.

Around us, a few dozen bright red and blue ice tents bulged like giant gum drops. Before I left, I would have to get into one to test Ray’s pronouncement.

Ray did say that instead of laying on the ice some folks used an electronic underwater viewer to see what’s under it. They go hole to hole, and drop down a small camera that feeds an image back to a monitor they’re holding. Others might opt for an electronic fish finder. Most simply sit and wait. 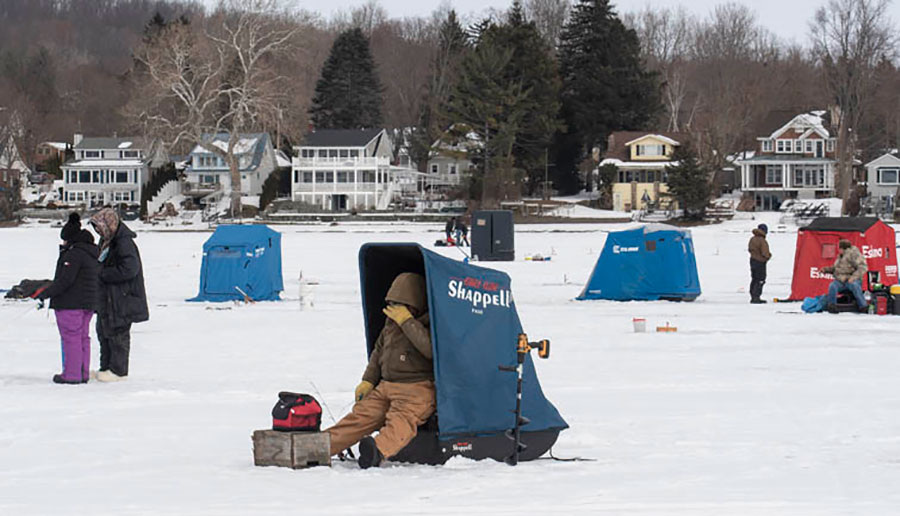 Last weekend, the ice attracted more than “ice sleepers.” There were skaters, bicyclists, walkers, sliders, a pilot (ski plane), adventurers, and observers of all ages. But no polar swimmers. The cold weather had thickened the ice on the north end of Keuka Lake to about 8 inches. A calm Saturday and a license-free weekend brought out all these people to a few square miles of frozen lake.

I hung around one ice shelter long enough that Bill Bacher sussed out what I wanted and invited me to take a look down the hole inside his two-seat shelter complete with heater. When I zipped it shut and leaned over the ice hole I saw that Ray was right. It seemed to glow,  opening a portal into another world. I didn’t see any fish but it was a bit surreal seeing straight through to the plant-covered bottom.

And I was starting to get why they were out here. The warmth and twilight haze of the insulated shelter made it snug and cozy and peaceful, and it muffled the outdoor noise. If I had a refreshment in hand, I’d be only a minute or two away from nodding off to become a real Keuka ice sleeper. 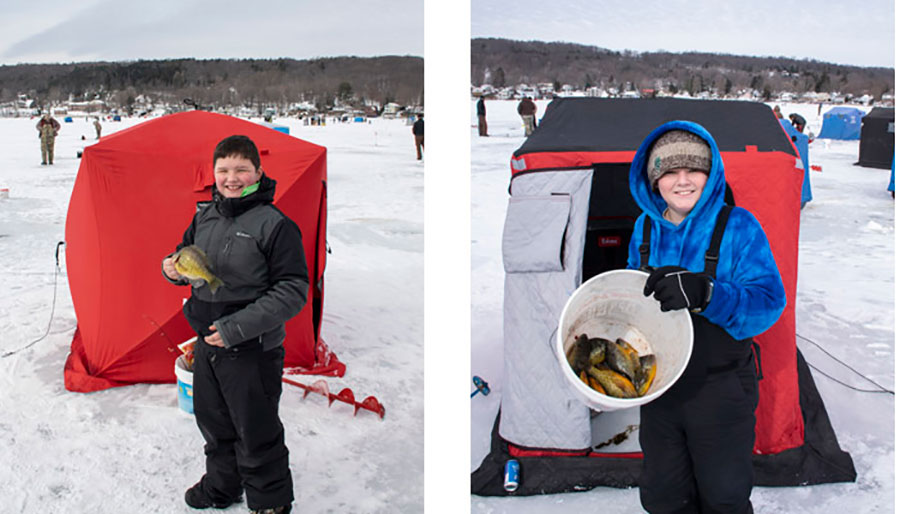