You never know what you are going to see when you venture out for a paddle on any one of our Finger Lakes.  I have been blessed in the past to witness osprey plunging into the pristine waters of Keuka Lake in a sometimes futile attempt at catching a fish, or a bald eagle making a fly by appearance at one of our outings at the Finger Lakes Museum and Aquarium. It’s always at times like this when I wish I had a good camera with a telephoto lens with me. I am reluctant to carry an expensive camera out on the water, especially while guiding a group of paddlers because of the possibility of having to perform a wet rescue.  A waterproof camera case would undoubtedly get in the way of a rescue attempt and most likely end up becoming the victim  at the bottom of the lake.  So, I resort to carrying a cell phone that is suppose to withstand water depths up to 3 meters for 30 minutes.  I hope I never have to find out if this is true. The downside of carrying this type of camera is that in spite of what Apple claims, long distance shots just aren’t up to the quality of a good telephoto lens. So, consequently, I often miss the best shots. This was the case last week when we were visited by a most unusual guest.

It was a beautiful evening for our first Full Moon paddle of the season. Our group had paddled out to the wetland where we saw great blue heron, red winged blackbirds, bank swallows, a flock of buffle head ducks, loon, an osprey and even a busy beaver. As if those species hadn’t provided enough photo ops, upon our return, we were visited by a bird I had previously never seen. At first I thought it was a loon or cormorant due to its diving behavior and the way it carried itself in the water.  But the coloring was wrong. It was dark and light gray with a gray bill.  It was most curious about the paddlers and swam under and around them. By the time I fished my cell phone out of my pocket, it was gone.  That night when I returned home, I consulted my bird books and thought that it might be a red-throated loon, but wasn’t sure as the Finger Lakes is not its natural habitat. The red-throated loon is more of a salt water bird and nests in the Arctic, but is sometimes found on larger freshwater lakes during migration. Could it be that it was migrating through this region? 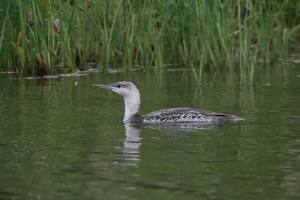 On Tuesday, it made a second appearance, this time in Sugar Creek, right near the museum’s boat launch.  It was first spotted by one of our young paddlers participating in a youth paddling program.  Fortunately, Nancy Jameson, group advisor, had her camera ready and captured these wonderful photos, that clearly shows the bird’s color and features.

On   Saturday, I showed these photos to a birder from the Rochester Birding Association who confirmed the bird’s ID as a juvenile red-throated loon.  I was ecstatic that I had correctly ID’d a bird that I have never seen on this lake.

According to Peterson’s Field Guide to Eastern Birds, the red-throated loon is similar to the common loon but smaller and slimmer.  It’s thin, upturned bill distinguishes it from other loons. It has a gray head, plain back and rufous throat patch.  It’s summer habitat is arctic tundra lakes, estuaries, bays and ocean.

I can hardly wait for my next paddle on Keuka Lake to see what other species of fin, fur or fowl await my discovery. Maybe next time, I’ll bring my good camera.

Currently, I am snowbound in Salt Lake City, Utah. Not by a snowstorm here (it is actually seventy degrees and sunny), but rather by…