Hunters love a good, light dusting of snow in November to help them track deer while they are out in the woods. Winter is a fun time to identify who has recently passed by from the tracks they left in the snow. Whether you live in rural or urban areas, someone has left a print for you to check out. 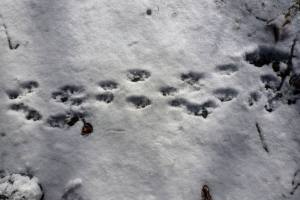 Squirrel tracks are fairly easy to identify as they are so common. The tracks from the smaller front feet will be placed side-by-side and show four narrow toes, tipped with a claw. The back feet will also show the toes, five in this case, with a claw mark. Where the tracks came from and where they go also indicates who they belong to. Squirrels often run between trees and tracks merely disappear at the base of a tree, rather than terminating in subterranean holes. These rodents also pause often to dig down into the snow looking for buried treasure. 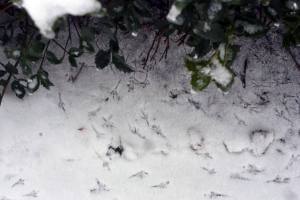 Though their main mode of getting around is flying, songbirds sometimes leave tracks for us to observe as well. The ones in this picture were left by some dark-eyed juncos that were hanging around in my holly bushes one year when I was faithfully filling the bird feeders. It was fun to see their tracks in the snow as it was yet another interesting way of studying the behavior of this group of flighty animals in a way one can’t the rest of the year. 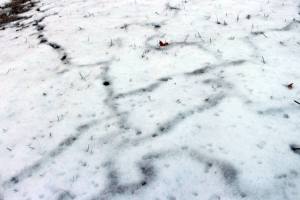 Though snow dumps on the ground, small mammals don’t stop. Mice and voles will tunnel highways under the snow so they can get where they need to go. In this picture, the snow had melted off after being quite deep and we are left able to see the network of trails they had formed. 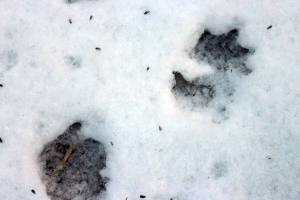 Last winter we had an opossum that was hanging out around the house, we even scared it off the porch one night when we came home after dark. Another time, I went out in the morning and found some well-formed tracks in the crispy snow. Opossums have very dexterous toes, the front foot (top right) has 4 toes, and the back foot (immediately below that) has an opposable inner toe, making the print resemble that of a child’s hand.

Hunter or not, winter gives us an opportunity to get outside and tune into our tracking skills. A keen sense of observation will allow us to see things that we can’t at other times of the year.

Gabrielle Wheeler is a freelance writer from the heart of the Finger Lakes Region. On her parenting blog, aplaceforlittlesproutstogrow.com, she writes about tending to the whole child and parent. She also works in a local health center as an interpreter/patient navigator.

Naples is home to a diverse and talented group of artists, and the Naples Open Studio Trail allows members of the public to see…