There is a cluster of white pine trees growing in my woods that stands from 80 to 90 feet tall and measures between 25 and 30 inches in diameter at the bottom. We previously harvested a similar clump of pines, which once stood precisely where our house is now located, and had them milled into tongue-and-groove boards for the home’s exterior siding and interior wall paneling as well. Our entire house is finished in knotty pine—inside and out—giving it the rustic, woodsy feel that we wanted.

I recently had a logger harvest a select number of white pines from the aforementioned clump, which will be milled into framing lumber and log siding that will be used to finish space in my walkout basement—something that has been on my to-do list for a long time. I’m planning a log cabin feel downstairs just for a different look. In the process, I will have accomplished two things: Opening up the forest canopy to allow more sunlight penetration, which will enable younger seedlings and saplings to grow faster, and providing the building materials I need to complete my project. 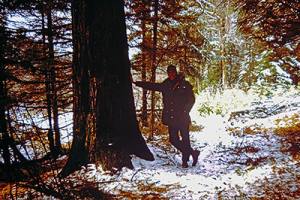 The Eastern White Pine (Pinus strobus) is a large conifer that is native to northeastern North America, ranging from Newfoundland to Manitoba in Canada, and southward through the Great Lakes Region to the Appalachian Mountains. Old-growth specimens still stand in some isolated parts of the Adirondack Park and inaccessible ravines in the Finger Lakes Region, which is why they’ve never been cut down. Some can be centuries old as exemplified by the cross-section of a tree that was harvested on Whitney Park in the Adirondacks in the 1940s. That 5-foot diameter slab is as big as a table top and is on exhibit at the Adirondack Museum in Blue Mountain Lake. It predates the arrival of Columbus by almost 100 years.

This whole undertaking started me thinking about the history and versatility of the white pine tree and how it became one of the causes of the American Revolution along with the tax on tea. Because of its enormous size and great strength, the light, easy-to-work lumber from the Eastern White Pine was prized as a shipbuilding material and the tall trunk of select trees proved to be ideal for making square-rigger ship masts during Colonial times. The British Crown claimed rights to any and all high quality white pines growing in the Colonies for the British Royal Navy, which angered Colonists and played a key role in their quest for independence—and the rest is history.

The Eastern White Pine is an evergreen that is easily identified by its soft flexible needles, which grow in bundles of five and are not prickly like those of other pines and spruces. It is the tallest pine in North America. The scales on its 4-to-6-inch cones open to disperse dozens of ¾-inch winged seeds—similar in appearance to those of a maple tree—in late summer and early fall. I’ve also found the fallen cones to be excellent fire starters in both of my wood-burning stoves.

So in retrospect, was it the Boston Tea Party that prompted the American Revolution or was it really the White Pine War?