Out of an estimated 28 million whitetail deer in North America, you may find it even more fascinating to know that in the whitetail deer population, it is estimated that less than 2 per cent will be born piebald. 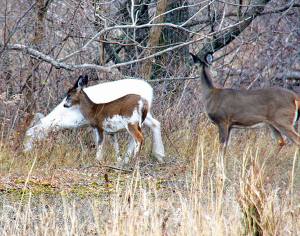 The name piebald is given to those creatures that show irregular patches, or blotches of two distinct colors, normally black or brown, and white.  The breakdown definition of piebald is “pie”—derived from the word magpie (a bird marked with black and white feathers), and “bald”—meaning marked with white.  Think of the beautiful paint ponies with coloration so unique it appears as if they’ve just stepped off the artist’s easel.  Some breeds of dogs also display this trait, as do snakes, and perhaps the most popular—the bald eagle.

Piebalds, as with the white whitetail, are not to be confused with albinos.  The trait of albino is of its own manifestation.  The piebald trait, like that of leucism, is passed down through a recessive gene.  Genetically, both doe and buck need to carry this gene in order to produce a piebald. 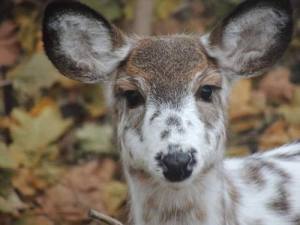 Unlike the white whitetail leucism gene, however, the piebald gene carries a few anomalies which produce congenital conditions.  These normally include a bowing of the nose, an overbite, short legs, scoliosis of the spine, a short mandible, and possibly internal organ deformities.  Regardless of these differentiations, piebalds blend well into their herds, and are most definitely an excitably rare occurrence when encountered in the wild.

Portions reprinted from “Beyond the Fence” originally published in the Finger Lakes Times.

When the 2011 production of “Cooking with the Calamari Sisters” nearly sold out its entire six-week, 49-show run, organizers of the Merry-Go-Round Playhouse in…