Along the ROC/FLX Craft Beverage Trail

Summer is a glorious season in the Finger Lakes Region. Warm, sunny days beckon us outside (currently our safest space to socialize with friends and family). One relaxing way to unwind from the stress of these pandemic years is to raise a glass to brighter days ahead. Sampling local craft beverages has become a popular pastime and sipping to a soundtrack of live music outdoors just makes it, well, better.

“Music is vital to our business and vision,” says Karl Neubauer, head distiller at Hollerhorn Distilling in Naples. Music is one of the distillery/restaurant’s three foundational pillars, along with good local food and, of course, spirits. Naples natives Neubauer and his wife Melissa own and operate Hollerhorn, which has become a popular hangout for locals and visitors since opening in 2018.

Smokin’ Tails Distillery in Phelps opened in winter 2021. This is their first summer with live music in their space out back, called The Holler (southern slang used to reference a small valley between mountains where people gather).

“People are just excited to be around live music again,” says Smokin’ Tails co-owner Sharon Cheney. “Then add in being outside in the nice weather, enjoying our great moonshine, spirits and friends – it just makes for an electrifying time.” The other owners are Cheney’s husband Pete, who serves as distiller, and Chris and Lisa Orlando. Pete, whose moonshine prowess started it all, appeared on the Discovery Channel series Moonshiners and was awarded the Master Moonshiner title for his four-grain moonshine.

To say that music plays an important role at the Iron Smoke Distillery in Fairport, founded in 2011 by musician Tommy Brunett, is quite the understatement. Brunett and his partners own and operate the distillery, producing noteworthy spirits such as Iron Smoke Straight Bourbon – named one of “Ten Best Bourbons Beyond Kentucky” by Forbes magazine.

The Tommy Brunett Band makes occasional appearances at Iron Smoke; in addition to their own shows, the band has opened for rock legends such as ZZ Top and Ted Nugent. Fun fact: Brunett shared the spotlight with Modern English (best known for the 1982 hit “I Melt with You”) when he was hired as their touring guitarist in the late ’80s through early ’90s.

Over in Rochester, the Big Red Stage at Black Button Distilling is a bit of a misnomer: the stage is actually the flat bed of a red 1947 Ford model 799T 1½ ton stake truck. Black Button’s public relations rep Arien Rozelle cheerfully reports that the Big Red truck has a top speed of 38 mph downhill with a tail wind. Live local acts perform outside from the (parked) truck from May through October.

“Playing on the truck was one of the coolest outdoor stages I’ve played,” says Rochester singer-guitarist Ryan Sutherland, whose original songs are influenced by Americana and rockabilly. “The aesthetic of the truck perfectly fits the kind of music I play.” Sutherland will be back to perform on July 8, this time with his power trio The Revelators.

Owner and head distiller Jason Barrett founded Black Button in 2012 and was collecting awards and accolades by 2015. Most recently, their single barrel straight bourbon took “Best of State” for New York during the 2021 national Heartland Whiskey Competition.

Hollerhorn, Smokin’ Tails, Iron Smoke and Black Button are all distilleries with live outdoor music, but they share another commonality: they are all stops along the ROC/FLX Craft Beverage Trail.

Forming a craft beverage trail was Barrett’s brainchild, though he initially focused solely on Rochester/Monroe county makers. “The original trail really lacked enough cohesion and size to effectively market itself,” he says. “After all, the whole goal of a trail is to combine the power of many to advertise each other’s business collectively. You have to get to a certain size to be an attraction.”

After reaching out for marketing advice from the Finger Lakes Visitors Connection (Ontario County’s tourism promotion bureau) the trail was reinvented, rebranded and greatly expanded by 2017. Today, it includes 38 wineries, breweries, distilleries and cideries across Monroe, Ontario, Wayne and Livingston counties.

The diverse, abundant selection of locally produced craft beverages includes wine, beer, spirits and hard cider. There’s something for everyone’s tastes, and each stop on the trail offers a unique experience, such as meeting the “maker,” enjoying delicious, locally sourced fare from simple snacks to gourmet meals or hearing live regional music.

The ROC/FLX Craft Beverage Trail has provided a performance circuit and resultant economic benefit for musicians like Sutherland. In addition to his shows at Black Button Distilling, he has appeared at other trail venues such as New York Beer Project and The Farmhouse Brewery in Victor, Noble Shepherd Craft Brewery in Bristol, Rohrbach Brewing Company and Sager Beer Works in Rochester, Reinvention Brewing Company in Manchester and Star Cider in Canandaigua.

“Music is an important component of our business model,” says Cortni Stahl, who co-owns Star Cider with her husband Adam and his brother Nate. “We love hosting and supporting local artists. It was also always the goal to be able to provide amazing drinks, food, and music to create an enjoyable atmosphere and memorable experience.”

Star Cider features music every weekend from May to October, including popular local acts Big Blue House, BarnSalt and Blonde Over Blue. Music is 6-9 on Fridays and 1-4 on Saturdays and Sundays. A new outdoor music stage makes its debut this summer.

This Canandaigua cidery is a family affair and that’s reflected in their tasting room, spacious covered outdoor patio and abundant grassy space, all of which is family and dog-friendly. In addition to their signature hard ciders and seasonal releases, non-alcoholic cider and slushies are on the beverage menu for the kiddos, plus community water bowls for the pups.

Peacemaker Brewing Company is also in Canandaigua. “Music is definitely a big part of the brewery, as our name is inspired by the music of my favorite band, Roger Clyne & The Peacemakers,” says owner Todd Reardon. Reardon often names his craft beers after song titles or lyric snippets from the Arizona-based national touring band.

While Reardon has brought Roger Clyne and his band to perform in Canandaigua three times (their fourth appearance will be Oct. 8, 2022), most of the acts he books are regional. “Two big musical local draws for us are Dos Locos and Brian Ayers,” he says. “Those guys bring a great crowd.”. Other favorites include Old World Warblers, Teagan and the Tweeds and the Tommy Brunett Band. (Ironically one of distiller Brunett’s signature original songs is “I Like Beer.”)

“I prefer breweries with live music,” says Guy Turchetti, a musician and teacher living in Canandaigua. “Peacemaker Brewing is a personal favorite of mine. I really appreciate Todd’s support of live music, both as a musician and as a customer.”

Peacemaker’s original location was small, with no outside venue. Musical acts played from a cramped space they shared with some brewing tanks. Reardon moved Peacemaker to larger quarters on Coach Street in 2020; the brewery and tasting room are housed in a charming, renovated carriage house with an outdoor patio and green space. In warm weather, music moves outside on Fridays, Saturdays and some Wednesdays. Tuesdays are open mic nights where some amateur talent just might land a future brewery booking. Getting a paid gig out of the deal would be sweet music to any musician’s ears.

These venues are just some highlighted stops along the trail that offer live outdoor music. For more information, visit rocflxcraftbevtrail.com.

Ramp up the fun of tasting a wide array of locally produced craft beverage by purchasing a 2022 ROC/FLX Craft Beverage Trail passport. For $25, the passport provides a trail map, descriptions of all trail member locations and special cost-saving perks for passport holders ranging from free flights to deep discounts off purchases and more. Get your passport stamped at each of the 37 venues by the end of 2022 and you can enter a drawing for a chance to win a merchandize prize package valued at $250.

The 2021 passport winner was Chris Aycock of Victor. His package included t-shirts, coasters, glasses and other items, along with gift cards from local businesses and two new 2022 passports. Aycock and his wife Melissa completed the trail together. The couple loved how the passport guided them. Their strategy was to head out to areas where there were clusters of participating locations and stop at each one on a weekend day. One of their favorite stops was Song Hill Winery in Victor. While they were unaware of this winery in their own town, they are now regular customers and wine club members.

Click on the passport link on rocflxcraftbevtrail.com for more information. 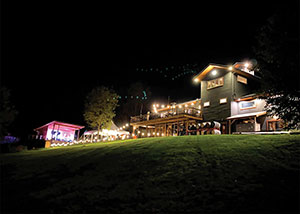 When this story went to press owners Karl and Melissa Neubauer had temporarily closed Hollerhorn Distilling after a fire destroyed the retail/restaurant portion of their business on May 12th. They are in the process of regrouping and reimagining their physical space. For updates, visit hollerhorn.com or follow them on Instagram or Facebook. Photo by Hayna Weems

By John Adamski   A couple weekends ago, I took a camera and a fly rod and headed to Canadice Lake for some early…