Romulus, Brutus, Dryden, Homer, Ulysses. These names may be familiar to anyone who took Latin in school, or is acquainted with Greek, Roman, or English literature. They are also some of the 28 townships established long ago in the Finger Lakes that have classical place names, along with the names of several English authors as well.

The towns are known as the Military Tract, which covers much of the present-day counties of Seneca, Cayuga, Cortland, and Onondaga as well as parts of Wayne, Schuyler, Oswego, and Tompkins.

Some of these original township names are reflected in current place names, but many no longer correspond exactly with modern town boundaries.

Historians credit the first 25 of the names to Robert Harpur. An Irish immigrant who taught for a time at King’s College, later Columbia University (one of his students was Alexander Hamilton), he was apparently a student of the classics. As a clerk in the office of the New York State Surveyor General, Harpur was also secretary of the Land Board, which was charged with the task of naming the new towns in 1790.

According to the New York State Archives, the area was first mapped in detail in 1789. Three more townships were later added – Junius in 1791, Galen in 1792 and Sterling in 1795.

Two Seneca County towns are of particular note. Romulus is a variant of the name of a founder of (with his brother Remus) and first king of Rome, circa 753 B.C. Many of Rome’s early legal, political, and social institutions are attributed to Romulus. Ovid is named for a prolific and revered Roman poet who had a profound influence on literature well into the 19th century.

Robert Harpur eventually settled in the Binghamton area and became a land developer. Harpur College, founded in 1946, was named after him. In 1965, Harpur College officially became part of the State University of New York, and is now known as Binghamton University.

By now you may be asking, why is it called the Military Tract?

This “bounty land” was set aside by the New York legislature in 1781 as compensation to entice men to serve in the Continental Army. New York was to raise two to four regiments of citizen soldiers “for the defense of the frontier of New York.”

At first, 100 acres were promised to each citizen soldier at the end of the war. But not enough recruits answered the call to serve, so New York upped the ante with another 500 acres per man.

Officers were awarded larger lots commensurate with their rank; for example, a Major General was entitled to 5,500 acres, while Captains and Regimental Surgeons were granted 1,500 acres. It was not unusual to compensate soldiers with land for their service, as there was a lot more land than hard currency. 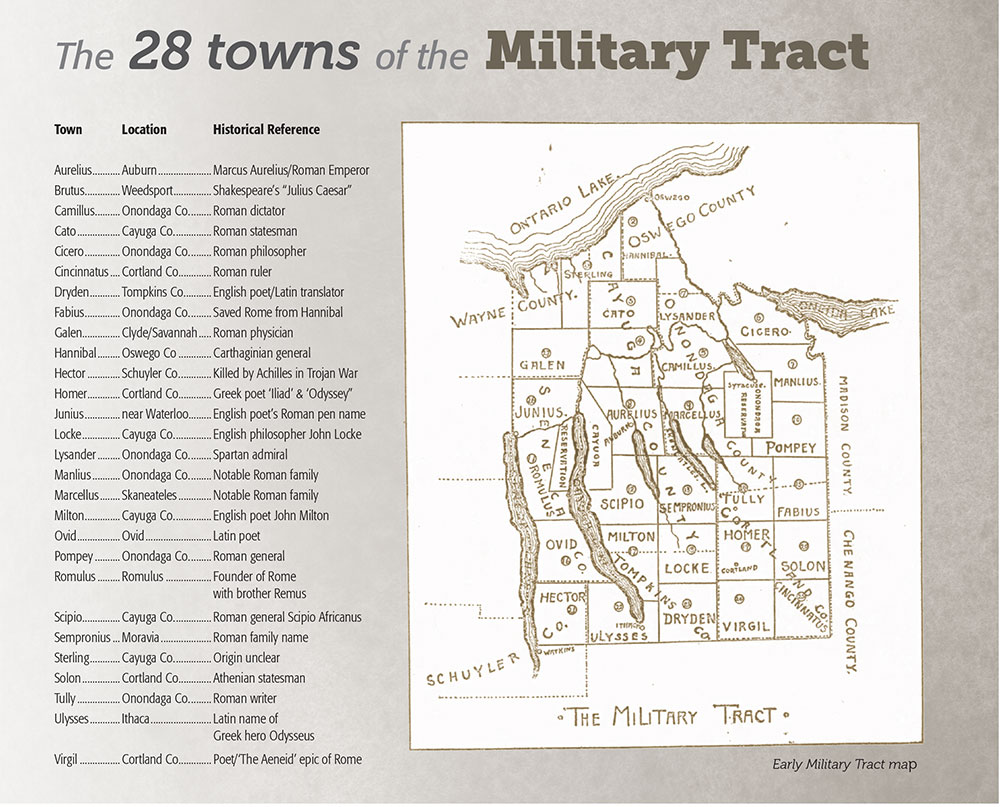 The Military Tract comprised 1,680,000 acres in what is now the Finger Lakes Region – and stretched from Lake Ontario and Oneida Lake on the north – south to a line extended eastward from the south end of Seneca Lake. It was bounded on the east by what is now Onondaga County and on the west by Seneca Lake. Each township in the tract was just under 100 square miles.

Land from the vanquished Iroquois was acquired by treaties or agreements. Some of the Indian lands were set aside for reservations. A 1912 American Monthly magazine article noted the Indian title to these lands was “extinguished” by the Treaty of Ft. Stanwix (Schuyler), September 12, 1788.

Many of the early settlers came from New England. However, some soldiers did not want to pull up stakes and move their families hundreds of miles, so they ended up selling their land grants to speculators.

Deborah Martin-Plugh has deep roots in the Finger Lakes. She grew up in Auburn and can trace many generations of ancestors on both sides of her family to the Military Tract. Samuel Ingersoll, her maternal fourth great-grandfather, enlisted in 1776 as a private in Captain Charles Smith’s company of militia, 9th Connecticut Regiment. He settled in Ovid, Seneca County, circa 1795, and is buried in the Sheldrake Old Burying Ground. Samuel Weyburn, Martin-Plugh’s fourth great-grandfather, participated in Sullivan’s Campaign and built a log cabin at Taughannock Falls at the end of the war. In 1794, he purchased 150 acres and settled at Sheldrake Point. Samuel and his wife Jane Bratton are buried in Lake View Cemetery there. Martin-Plugh feels a deep sense of personal history, noting that “in the History of Tioga, Chemung, Tompkins, and Schuyler Counties, Weyburn is described as the first white settler.”

Bill Sebring is the historian of the town of Romulus. About the Roman origins of the town’s name, Sebring says, “One-third of the people here don’t know the history, one-third think it’s unusual, and one-third don’t care.”

While Sebring hadn’t heard of Romulus before moving to the area in 1995, he was surprised to find his last name in early records when researching the history of the 1850s farmhouse he purchased. He was able to trace it back to his sixth great-grandfather’s brother, who bought Military Tract land after serving in Sullivan’s Army.

The Sullivan Expedition made forays into the Finger Lakes against the Seneca Indians during the Revolutionary War under orders from George Washington. Seneca County historian Walt Gable says much of the land was gobbled up by Sullivan’s soldiers because they saw firsthand the natural beauty of the land – and its fertile soil and agricultural potential. “I’ve only been able to document four Revolutionary War soldiers who actually settled on land they got in what is now Seneca County through the initial land assignment process,” says Gable.

Ray Levato is a retired reporter/anchor at WHEC-TV Ch. 10 in Rochester.

I am a photographer who loves exploring the many different landscapes of the Finger Lakes. My weekends are filled with hikes through gorges, forests,…