A colorful panel, long part of the historic Dentzel Menagerie Carousel at Ontario Beach Park on the shores of Lake Ontario, has a new role. The painted farmyard view that included a derogatory portrayal of African American children, one of 18 mounted on the carousel’s rounding board, went largely unnoticed for 111 years before it was removed thanks to the efforts of community activists. Since 2017 the panel has been a part of the Take It Down! Organizing Against Racism exhibit at the Rochester Museum and Science Center (RMSC). Each year it is taken out of the museum for a few months to stimulate conversations about racial inequity in the community.

Since 1905, the carousel has delighted park visitors with its 52 hand-carved horses, ostriches, cats, pigs, and other animals. Built by the G.A. Dentzel Company of Philadelphia, it’s one of only a few remaining in its original location, a survivor from Ontario Beach’s early amusement park era. While other panels show only animals, the offensive scene features a large rooster terrorizing two Black children. Their crude and exaggerated features and frightening predicament typify the dehumanizing caricatures of Black children called “pickaninnies.” Such stereotypical depictions have a long history and support white supremacy.

The Take It Down (TID) Planning Committee was formed in 2015 “for the purpose of working to have the pickaninny art panel removed from the carousel,” explains Howard Eagle, a retired Rochester teacher, activist, and local anti-racism expert. Eagle was joined on the committee by other community leaders, including Minister Clifford Florence Sr. of the Central Church of Christ.

The city-owned carousel is managed and operated by Monroe County. Named an historical landmark by the City of Rochester in 1980, any structural changes require approval by the city’s preservation board. While the panel’s removal was met with some resistance, permission was granted by the Rochester Preservation Board in 2016. RMSC became its custodian, and in partnership with the TID Committee and the City of Rochester, fabricated an exhibit to show how pickaninny art perpetuates racism. The collaboration included planning for a replacement panel. 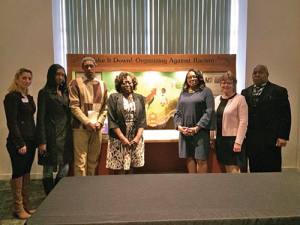 Kathryn Murano Santos, RMSC Senior Director, Collections and Exhibits, explains that the exhibit “creates a platform for people most impacted by racism to illuminate the complete story.” The museum had tackled the topic of race before, with the 2012 exhibit RACE: Are We So Different. “Museums are adapting to new roles today,” says Murano Santos.

The Take It Down! exhibit opened in 2017 at the Central Church of Christ in downtown Rochester before being installed on the second floor of the RMSC. The panel is encased in a cabinet with text posing relevant questions about racism: why pickaninny art was part of the carousel for 111 years and what needs to be done to overcome racism. A TV monitor plays a video addressing societal racism, produced by the Jim Crow Museum of Racist Memorabilia at Ferris State University.

Wheels on the display allow it to travel throughout the community. Locations include the Central Church of Christ, Phillis Wheatley Community Library, and the F.I.G.H.T. Village. The latter, an outgrowth of the F.I.G.H.T. (Freedom, Independence, God, Honor, and Today) Organization, is identified by Eagle as “the most significant Black organization in Rochester during the entire 20th Century, founded by Franklin Florence.” Minister Clifford Florence, Sr., Franklin’s son, was instrumental in helping to get the pickaninny panel taken down.

“We can’t bury our heads in the sand,” Florence explained in a 2018 WXXI radio interview. “We need to not only bring down the panel, but bring down racism.” Already, about 20 public programs have provided anti-racist education throughout the community. “This is just an example of what people can do when they work collectively and collaboratively when they are consistent,” says Eagle. “So the next question becomes, what else can we do together [to target] individual, institutional, and structural racism?”

“Spending a lot of time by the lake growing up, I remember seeing the carousel as a boy,” says artist Michael DeLuca, whose painting of a black panther was selected in 2018 to replace the old panel. “I always admired the beautiful woodwork and decorative detail. I visited the carousel once more before I created my submission piece, to get an idea of what was painted on the other panels and their stylization.” 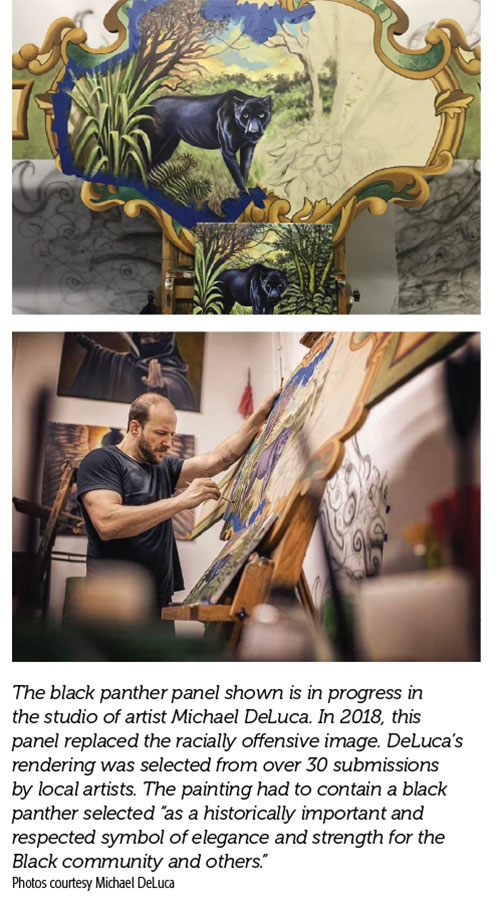 Eagle says the committee always wanted to replace the pickaninny panel with an image that would be “significant to the Black community in particular, while maintaining congruence with all other images on the carousel, and hopefully representing significance for the entire community.”

“It is not coincidental, nor by ‘happenstance’ that we chose a black panther. It has deep historical meaning and value,” Eagle explains. Voter registration in 1960s Lowndes County, Alabama, when the county was 80-percent Black, was led by a group that was the predecessor of the Black Panther Party. Its black panther logo embodied courage, determination, and freedom. The opposition was represented by the rooster, the logo of the overtly racist Alabama Democratic Party, whose slogan was “White Supremacy / For the Right.”

“The black panther is an exciting choice, relevant because it came from the community and opens up conversation. That is how we grow,” says Minister Florence.

The Take It Down! exhibit and programs have been recognized by museum professionals across the state. In 2019, RMSC’s exhibits team and the TID Committee received an Engaging Communities Award from the Museum Association of New York for their partnership and work with the City of Rochester.

When Doug Belton, Sr. learned about the pickaninny panel, the local collector offered to loan his collection of racist imagery and related consumer products. The resulting Objectively Racist: How Objects and Images Perpetuate Racism And What We Can Do To Change It exhibit is a perfect complement to Take It Down! Along with another RMSC exhibit, Flight to Freedom: Rochester’s Underground Railroad, the museum continues to expand awareness of individual, institutional, and structural racism.

To learn about RMSC and download a Take It Down! Brochure, visit rmsc.org.