Right in the middle of writing a Life in the Finger Lakes magazine blog last Thursday evening, my electric power went out. It had been snowing hard for about four hours before everything went dark. It was a heavy, wet snow and I was hoping that a power outage wouldn’t occur, but then it did. And it stayed out for the next four days. I live in the woods on a gravel road in northwestern Steuben County and my nearest neighbors are more than a half-mile away in both directions. So whenever the power goes out, we aren’t usually at the top of the list when it comes to restoration.

Our property was off the grid when we built here in 2002, so we paid for nine utility poles and 2,700 feet of electric and telephone wire in order to extend service. You’d think that might give you some clout, but it doesn’t. In any case, it snowed all night and much of the day Friday. And as it turned out, thousands of Southern Tier customers were also without power so I was not alone. 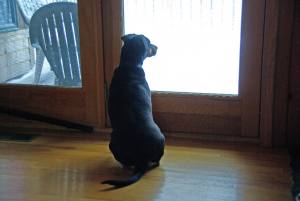 The author’s dog Daisy is waiting out the March storm.

Realizing that it might be out for a few days, I went into survival mode. I fired up both of my wood-burning stoves so heat was not an issue. They enabled me to maintain an indoor temp in the mid-70s throughout the ordeal. In order to preserve the food in my refrigerator and freezer, I packed it all in a large cooler and plopped it in a snowdrift on my deck. And I melted snow in buckets alongside a wood stove for toilet-flushing water. I even percolated coffee on top of a wood stove — like I’d seen on “Gunsmoke”— which took a while but it worked. I used bottled water because my water well pump wasn’t working. But then it got me to wondering, where did Marshal Matt Dillon get his coffee water from? I don’t ever remember seeing a sink in the Dodge City jail. Oh well.

Once the snow stopped, it took almost 5 hours to dig my way out. Normally I can plow my 400-foot driveway in 45 minutes but the snow was so heavy that I had to use the front-end loader on my utility tractor to pick it up and dump it aside — something that I’ve never had to do before. The town plowed the road, so once I broke through the plow bank, I was able to get out in order to get something to eat.

There was some humor in the situation as well. Even though I have a couple of low-voltage battery-operated camping lanterns that provided me with some light, I always flipped on a light switch whenever I entered a darkened room. And every time I returned home from running an errand, I inadvertently pressed the garage door opener in my car before realizing that it wasn’t going to work. While this may not compare to an outdoor wilderness survival situation, it was something that challenged my wits a bit and an experience that I somewhat enjoyed — under the circumstances. Oh yes, look for the blog I was writing when the lights went out the next time around.

Story and photo by John Adamski