Comes to Fairport and the Erie Canal Region.

To follow the stairs below street level at the west end of Rochester’s Broad Street Bridge is to step back in time. You encounter images of the 19th-century world, when the bridge served as the aqueduct carrying the Erie Canal over the Genesee River. Historical figures appear to climb up and down the stairs alongside you. Nathaniel Rochester (1752-1831), for whom the city is named, reaches out to purchase a flower from a vendor.

He and the others are part of a vibrant mural entitled “Child’s Basin 1830: Through the Looking Glass,” depicting a busy commercial world seen through two painted archways. It is one of many murals in the Finger Lakes Region, painted on everything from barns to bridges. The murals will be the focus of the 10th Global Mural Conference in Fairport, September 18 through 25. Activities include tours, speakers, workshops, and 20 new murals painted by international and local artists, which will become permanent installations along the Erie Canalway Heritage Corridor.

“Breaking down the wall,” is how Serge Malenfant, president of the Global Mural Arts and Cultural Tourism Association (GMACTA), describes a muralist’s use of trompe l’œil, meaning to trick the eye into perceiving a painted object as three-dimensional. When someone mistakenly identifies something painted as real, “We know we did a great job,” says the artist.

GMACTA was founded in 1997 in Chemainus, British Columbia, by Dr. Karl Schutz a speaker at the 2016 conference. He is the originator and architect of the Chemainus Mural Project – a series of historic murals which became a major attraction in a community once facing a bleak economic future. “Its success inspired so many other towns in different countries around the world to explore this avenue,” says Malenfant who founded Urban Murals for the Revitalization of Buildings and Social Reconciliation (M.U.R.I.R.S.), a nonprofit organization based in Sherbrooke, Quebec. Sherbrooke’s bicentennial in 2002 prompted the city’s first mural. “It was a way to make downtown beautiful,” says its native son. Today, 15 giant outdoor murals have helped revitalize the city and it has become a major tourist destination.

Mural Mania on the World Stage

Welcoming attendees to the biennial conference will be its chair, Mark De Cracker, founder of Mural Mania in Lyons, which began around 2007. Its mission was “The Preservation of History Through Community Art.” In 2010, the mural project was awarded the Erie Canal National Heritage Corridor Award of Excellence. “Today, we have 75 miles of murals, heading east of Rochester from Macedon to Syracuse. With Fairport, we will have 85 by the completion of the conference,” says De Cracker. The former Lyons Chamber of Commerce president is chair of the biennial conference

At the 2014 Global Mural conference in the city of Sherbrooke in Quebec, De Cracker secured the Erie Canal region for the international gathering. His presentation included 25 letters of support with strong backing from officials like New York’s U.S. Senator Kristin Gillibrand and New York State Assemblyman Bob Oaks.

“The murals have created a sense of identity for the region. I don’t know of another rural area that has such a concentration of public art that tells its history.”
–N.Y.S. Assemblyman Bob Oaks

“During the past decade or so, murals have been painted in just about every community in my district, and in many communities to the east and west,” says Assemblyman Oaks. His District 130 runs along the canal system, and includes the towns of Macedon, Palmyra, Arcadia, Lyons, Galen, Savannah, and Montezuma; the villages of Port Byron and Weedsport; and in Oswego County, the Town of Minetto. He believes murals have added to the understanding of the canal’s rich history, both for local residents and visitors. “The murals have also become a part of community pride.

“Bringing the Global Mural Conference to the region is the culmination of years of effort and hard work on the part of many people who supported the murals. Not all of them are in canal communities, either,” says Assemblyman Oaks. “There are murals in Sodus, Williamson and Walworth, because people wanted them there and raised funds to make them a reality. The murals have created a sense of identity for the region. I don’t know of another rural area that has such a concentration of public art that tells its history.

“Anyone who knows Mark
De Cracker knows that it is impossible for him to contain his energy or enthusiasm,” continues Assemblyman Oaks. “Bringing the conference here has been a longtime goal for him and it’s no surprise to me he’s accomplished it. For years, Mark has been one of this area’s biggest cheerleaders. He is deeply passionate about the murals and the canal, and has been that way for many years. It’s been a true pleasure to work with him and to share his positive outlook.”

One portion of the “Child’s Basin” mural, painted by Cazenovia College Art Professor Corky Goss, is featured on the conference poster. Looking out through a stone archway is the first Mayor of Rochester and son-in-law of Nathaniel Rochester, Jonathan Child (1795-1860). Child owned the basin, the city’s busiest landing, and we gaze over his shoulder to view a lively composition of canal boats navigating the waterway, unloading and taking on cargo while one mule, the power of such boats, is shod by a blacksmith. People scurry between boats, warehouses, and other buildings.

“Tons of research support the final design,” says Goss, of the process related to the 14 mural projects he has completed from Rochester to Richfield Springs, all related to the Erie Canal. Goss is now working on a new mural for Fairport to be dedicated during the conference.    “Normally historic photos guide the way and are shaped into an original composition with particular views and elements specific to the location and its traits.”

The Rochester project required about five design iterations to get the orientation of the view correct. “Numerous historians assisted with this process,” said Goss.

From the Local History & Genealogy division of the Rundel Memorial Library building where her office is located, Michelle Finn, PhD, Deputy Historian for the City of Rochester, can glimpse Goss’s mural. “As a historian, one of my goals is to help people better understand the past. The opening of the Erie Canal in 1825 ushered in a period of unprecedented growth for Rochester and by the 1830s, the Child’s Basin landing was a bustling hub of commerce and of social and intellectual exchange.”

Finn leads walking tours of Rochester’s Heritage Trail. “I find that the mural serves as a useful visual aid. It gives my audience a real feel for the history and for how the area has changed over time.”

Montezuma Town Historian Cheryl Longyear is excited about the upcoming mural conference. “So much of our early Erie Canal history has been lost through the rerouting of the Canal system that contributed to economic decline. Through the years, many of our communities have lost touch with their heritage, and it is difficult to even envision what our towns and villages looked like back then,” she says. “Historians and public officials are exploring ways to use our heritage to stimulate economic growth and revitalization, promote tourism and rebuild community pride. Public art is proving there is a way to make these stories come alive, preserve our history for generations to come, and help us reconnect to a sense of place that has been lost.”

“Being surrounded by so many inspirational and creative people is so fulfilling,” says De Cracker. “Watching artists weave a story of history before your eyes is just amazing.”

Thousands will be watching muralists under a tent at the Woodcliff Hotel in Fairport. “We will ‘perform live’ for a week providing an opportunity for a good exchange for the artists and audience,” says muralist Serge Malenfant. Amy Colburn of Bristol, a painter of interior and exterior murals for more than 20 years, and Corky Goss will oversee the Erie Canal Heritage Mural Expo tent where commissioned murals will be painted on Evolon, a flexible composite material more durable than canvas, which will later be applied to walls.

Artist Dawn Jordan will complete a mural under the Expo tent for the town of Montezuma that depicts the Richmond Aqueduct, built in 1849 to carry the Enlarged Erie Canal waters over the Seneca River. “It was the second largest on the Enlarged Erie, spanning 894 feet with 31 arches,” explains town historian Longyear. “It was dismantled in 1917, when the Seneca River was dredged out to become the New York State Barge Canal.”

The Montezuma Historical Society is sponsoring this mural to be located northeast of the Seneca River Bridge along Route 31 in Montezuma Heritage Park. “Dawn did our first mural and she was absolutely wonderful to work with and a very talented artist.”

At the culmination of the conference, “Art Walks on Water” will parade the new murals by boats along the Erie Canal. Organizer and art teacher Lori Skoog of Brockport says, “The goal is to have a piece of art at every town and village bordering the New York State Canal System, creating the longest art gallery in the world.”

Conference attendees and the public will be invited to the dedication of several new murals including a new one in Canandaigua at Main and Coach Streets. Amy Colburn designed a montage of historic landmarks together with images of local philanthropist Mary Clark Thompson and Jesse Hawley, whose connection to the Erie Canal and the city is less familiar. Several artists will each paint a portion of the mural in their studios. This off-site fabrication means Coach Street will be closed for only a short time during the mural installation, explains Colburn.

She has already completed a 658-square-foot mural in 2014 off Canandaigua’s Main Street. On the back side of a Niagara Street business alongside the walking trail and railroad tracks, a painting replicates the bustling train depot during its heyday 100 years ago in 1916. A trailside bench affords a view of the entire mural along with a detailed historical marker.

Another conference feature is a collaborative mural created by school children under the direction of Lisa Petrosino, a K-through-6 art teacher in Auburn. More than 700 student artists from across New York will paint a scene depicting their local heritage on top of 6-inch squares of Evolon, which have been base-coated with a color from the original image. The reassembled squares will create a common Erie Canal scene in a 12- by 16-foot mural to be displayed at Woodcliff.

“The conference will be an exciting venue to learn hands-on how we can promote our history by reconnecting our communities through a trail of historic murals all along the Erie Canalway National Heritage Corridor,” says Montezuma’s Longyear. Numerous workshops and speakers will address topics such as public art, tourism and economic development, and preserving history, along with the funding, planning, marketing, and maintaining of murals. Dan Ward from the Erie Canal Museum in Syracuse, will present a new documentary at Ohmann’s Theater in Lyons, “Boom and Bust: America’s Journey on the Erie Canal,” to be reviewed in an upcoming issue of Life in the Finger Lakes. 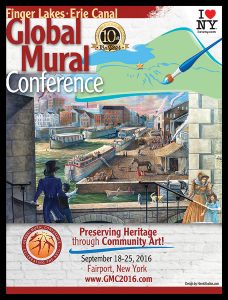 To see the full conference schedule go to gmc2016.com. Individuals and organizations are welcome to inquire about sponsoring a mural or conference event. Check back often on the website for new developments.

Winters in Syracuse are known for being bleak and dreary. So on one glorious sunny Sunday in February, my brother Jim and I went…