After meeting by chance in 2015, Andrasik and Snyder realized their similar backgrounds – both graduated with bachelor’s degrees in creative writing and had long cultivated a love for fiction writing – could be put to use to build a community of writers in Penn Yan. They established PY Writes as a way to encourage creativity and expression through the written word throughout the Keuka Lake area.

“There was some selfishness behind the idea,” says Snyder, a Penn Yan native who works as a writer and editor in the communications department at Hobart and William Smith Colleges in Geneva. “Of course, we wanted to inspire people in the area to practice and enhance their writing skills, but we also wanted to inspire ourselves.”

Over the course of five years – including a 2018 rebranding to Keuka Writes to encompass all communities in and around the lake – Andrasik and Snyder have worked with more than 300 writers, ranging from those who have extensive publishing resumes to those who are just beginning to explore their place in the world of writing, and have hosted about 50 public events, from theme-based prompt-writing events to open mics and readings. 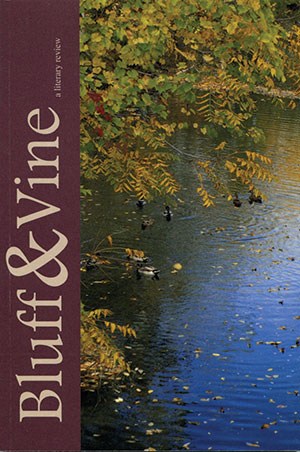 “This small seed of an idea has blossomed into something big and beautiful that I don’t think either of us predicted,” says Andrasik, a native of Fredonia, New York, who serves as the adult services librarian at the Penn Yan Public Library. “We’ve made connections and developed friendships with first-time and long-time writers, and I know I can speak for Bethany when I say the work we’ve done has influenced our personal writing as well.”

Early on in their literary partnership, Snyder and Andrasik confessed that they’d both dreamed of one day starting a literary magazine. In early 2017, they decided it was time for that dream to become a reality.

“We looked at each other and said, ‘Why not?’” says Snyder. “I think we’d been waiting for someone to give us permission to do it. But we didn’t need permission. We just needed to start.”

They started with a name: Bluff & Vine, inspired by the Bluff Point peninsula of Keuka Lake and the abundance of vineyards and wineries in the area. A call for submissions went out to writers through social media and the local press in April of 2017.

Three issues later, Bluff & Vine has carved out a unique place in the literary landscape: it’s the only publication that features poetry, memoir, fiction, and nonfiction exclusively based in or inspired by the Keuka Lake area.

The magazine is laid out by Snyder, a self-taught designer, and published through Kindle Direct Publishing, a service of Amazon. “It’s a great way to get the magazine out there,” says Snyder. “Anyone can click and order a copy online, but it’s also available on the shelf at Longs’ Cards and Books in downtown Penn Yan, and any bookstore can stock it.”

Andrasik has focused on ensuring copies are on hand at libraries all around Keuka Lake. “As part of our efforts to get the word out about the magazine, we’ve conducted readings and writing events in Hammondsport and Branchport, Pulteney and Dundee,” he explains. “Every new connection we make is a potential new submission for our next issue.”

As the magazine has grown and evolved, so has Snyder and Andrasik’s vision. In early 2020, the duo decided it was time to expand beyond the Y-shaped lake where they both make their homes. In January, they announced that the fourth issue of Bluff & Vine will encompass all 11 Finger Lakes.

“We know there are still stories out there to tell about Keuka,” says Snyder, “but we’re excited to share work about Seneca, Skaneateles, Conesus, and everywhere in between.”

Writers don’t have to be from the Finger Lakes to try their hand at being published in Bluff & Vine – they just need to submit work that, as Andrasik explains “evokes the feeling of this unique area. We’re looking for anything that captures the essence of the Finger Lakes, whether it’s from a long-time resident or someone who vacationed here as a child.”

The fourth issue of the magazine will also, for the first time, feature cover art selected from submitted material. Previously, Bluff & Vine included visual work created by artists with developmental disabilities from SkylArc Studio, a program at Mozaic (formerly the Arc of Yates) in Penn Yan.

Andrasik and Snyder look forward to making connections in communities throughout the Finger Lakes Region as more people become aware of Bluff & Vine and the work they’re doing with Keuka Writes. While they’ve had to scale back their programming in light of the coronavirus pandemic, they continue to host virtual events and readings. And when the fourth issue of the magazine is released in the fall of 2020, readers everywhere can curl up with a fresh look at the Finger Lakes from the comfort of their homes.

“Every year, we look back at what we’ve built, and we look forward to what comes next,” says Snyder. Andrasik nods. “It keeps growing and growing,” he says. “There are always more stories to tell.”

The parking lot was empty when we got to the apple orchard, but we really weren’t surprised. Weekday afternoons in mid-September aren’t considered prime…