On Thursday February 11    Meet the Author of the book, They Brought Tarnished Secrets at the first in the  Newark-Arcadia Historical Society’s 17th Annual Winter Lecture Series.    This forceful story was written by Sharon SanAngelo, a retired nurse and resident of Newark, NY.

It focuses on the circumstances of   three generations of one family   in Croatia during the unsettling times of World War II and its aftermath.  This poignant tale chronicles the   family’s desperate escape from their homeland,   life in relocation camps, and ultimately their immigration to America.

They Brought Tarnished Secrets was one of several books reviewed in Life in the Finger Lakes  magazine’s November-December 2020 issue, now available to read on line.https://www.lifeinthefingerlakes.com/lose-yourself-in-a-great-story/

The other lectures are 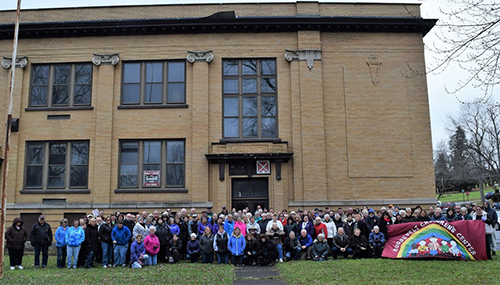 Roosevelt School: More Than Just a Building is the program scheduled for March 10. Here, more than 100 former students and staff gathered at the Roosevelt Grammar School and later Roosevelt Center for a photo in December 2018 before ithe building’s demolition the following year. Photo courtesy of Marc Kreuser.

Wednesday March 10 – Roosevelt School: More Than Just a Building will be presented by Cynthia Russell.  This PowerPoint program was postponed from 2020’s lecture series.   It will be accompanied by stories and photos of students and teachers of the East Ward School located at the corner of Vienna and East Union Streets in Newark.  The school was built in 1912 and torn down in 2019.   Russell, a former administrator of the Lincoln School in Newark, is a past  President of N-AHS.

Thursday March 25 – Newark Notables: Part II by John Zornow will focus on  some of the fascinating people who called Newark home. This   nostalgic program takes a look at people from Newark’s past and present.  Zornow is a life-long resident of the Wayne County community, an avid historian, writer, and active member of the N-AHS.

To insure social distancing the 2021 Winter Lecture Series will be held at Alex Eligh Community Center, 303 East Avenue, Newark.   Reservations will be necessary with occupancy limited to 40 people. Please call the Museum at 315-331-6409 or email arcadiahistory@gmail.com.

Masks are required.  All the programs are free with donations accepted.

The Newark-Arcadia Historical Society Museum is located at 120 High Street in Newark and open during the winter on Saturdays, 1-3 p.m.

UPDATE! This evening’s performance with Keller Williams at the Center for the Arts of Homer (72 S. Main St. Homer, NY) has been rescheduled…