I have written about Finger Lakes wines for Life in the Finger Lakes for nearly 10 years. During my tenure, I have been approached from time to time by people with questions about wine, grape growing, and the Finger Lakes. I’m always glad to share some of my knowledge and I’m often surprised how much information I’ve picked up over the years during numerous conversations, site visits, and interviews. With these interactions in mind, I thought it would be fun and interesting to create a feature where you, the reader, can ask questions directly.

These initial questions were asked by some staff members at Life in the Finger Lakes (and they are quite seasonally appropriate as you read the winter issue … brrrr). For upcoming issues, I invite readers to submit questions directly to jason@lifeinthefingerlakes.com. and please include the subject line “LIFL wine questions.” I’d be happy to answer many of the questions on these pages!

Q: How do cold winters in the Finger Lakes affect grape growing and wine production?

A: This is a common question and focuses on the durability and ultimate survivability of vines in extreme temperatures. There are several ways to look at the potential outcomes of a cold winter.

Vinifera (European grape varieties) are generally sensitive to extreme cold, but this is not universal to every varietal (or type). Some varietals can really take a hammering and remain relatively unscathed. For example, Riesling is relatively cold hardy. Merlot, on the other hand, is one of the first to become damaged in the cold. 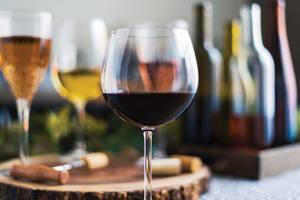 When is cold too cold? Depending on the site, several hours of single digit temperatures can have an effect. When a vineyard faces hours of prolonged temperatures well below zero, then some damage is virtually guaranteed. Vines seem most susceptible when they face large and dramatic temperature swings (the temperature rising then dropping 50 degrees in the course of a day or two).

And what is damage? Extremely cold temperatures can cause the death of primary buds, which means that the plant has limited capacity to grow foliage and bear fruit. The vine may then revert to what are called secondary buds and eek out some growth, although these can also become damaged.

In extreme cases, a cold-exposed vine can die back to such an extent that a full replanting will be necessary. This may happen to only a few vines in a single vineyard in a given season or perhaps a great deal more in a really bad scenario.

The effect of all this on winemaking is hard to quantify in some respects. Purely from a volume perspective, the damage of primary and secondary buds makes for fewer grapes, but good wine is often made with lower yields anyway. Not every cold-damaged vineyard faces a bad vintage, and sometimes the exact opposite is true.

Of course, cold damage has very little to do with the strength of the actual growing season, which is the most important factor. If a vine makes it through the winter relatively intact, it’s the summer sun and temperatures which really ripens the grapes.

Q: What is so important about a vineyard being near a lake?

A: This isn’t important in every region, but it’s important in places like the Finger Lakes to balance the extremes of winter and summer we enjoy in upstate New York.

The endothermic properties of water means that large lakes can serve to modulate, if only by a few degrees, the surrounding winter lows (see previous answer above). Generally speaking, grapevines that are planted on a site near a lake suffer a little less damage and have a greater chance of entering the spring fully intact.

Overall, grapevines love warm days and cool nights to really round out their ripening and flavor profiles. The Finger Lakes region receives favorable amounts of sunlight and often reaches the requisite number of good growing days. The evening cooling effect of the lakes, the factor that humans find pleasant during the hottest stretches of the summer, is much appreciated by the grapes as well. Even warmer growing regions around the world often share the trait of varying temperatures between day and night; without it, good grape growing is challenging.

And, let’s admit it, a vineyard is often a beautiful thing to behold, but a vineyard poised on a slope over a shimmering Finger Lake is that much more picturesque. The special setting in the Finger Lakes adds something to the experience that in some ways goes beyond the wine.

Q: Whenever I visit a Finger Lakes winery for a tasting, why do they serve the white wines before the red wines?

A: Red wines have a heavier and more prolonged taste than whites due to tannins, barrel aging, more alcohol, etc. The theory behind the tasting lineup is you start with the lighter fare and work your way up the robustness of a red.

You could always try doing it the opposite way, but I wouldn’t recommend it.

Once called “Crooked Lake,” Keuka Lake is the centerfold of just about any Finger Lakes map. Not only the heart of the region, it’s…