Story and photos by Bill Banaszewski

Can you identify these wildlife faces?

Don’t scroll down to see the answers yet, but here’s a hint: The eyes tell the story. Eyes in the front, the animal hunts. Eyes on the side, the animal hides. 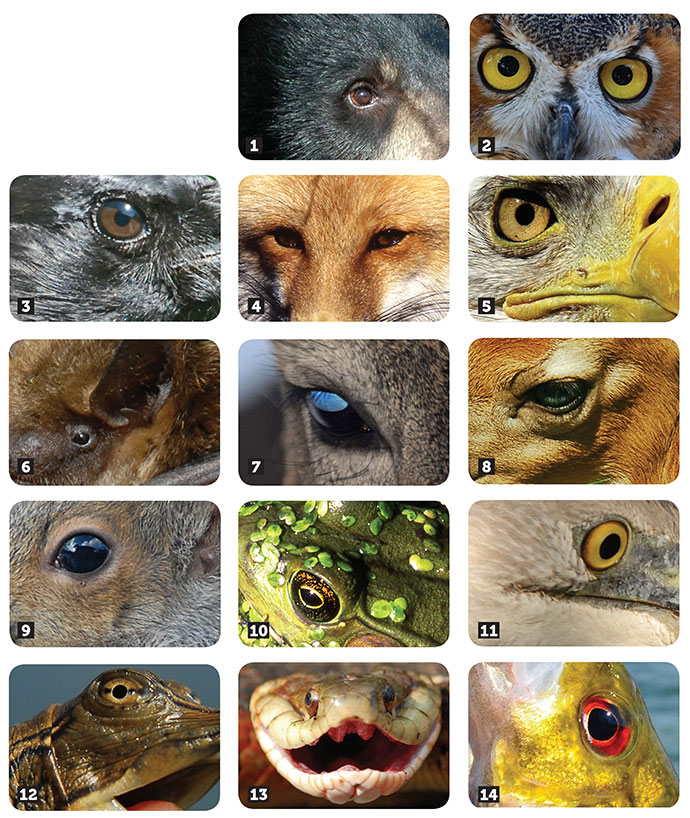 Predatory animals such as fox and bear (1) have eyes in the front of their heads. Binocular vision, which means both eyes are used together, gives predators a wider field of view that enables them to see the prey they are pursuing. In short, their eyes are designed to seek out food.

Great horned owls (2) also have binocular eyesight but only have a 110° field of vision. However, when they rotate their heads their field of vision increases to 270°.

Owls have very large eyes which is typical of predators that hunt at night. Their large cornea (the transparent outer coating of the eye) and the pupil (the opening in the eye) adjust at night allowing more light to strike the light absorbing retina.

Unlike owls, crows (3) have divided vision, meaning each eye can see separately. This makes it nearly impossible to sneak up on a crow.

Predators that hunt both day and night such as red fox (4) have pupils that narrow into slits to reduce the glare of the sun when hunting during the day.

Bald eagles (5) are believed to have the sharpest sight of any animal.  Their striking yellow eyes can spot wildlife two miles away and can see field mice from 600 feet above. No doubt why sharp sighted people are called “eagle eyes”.

Folks with poor vision are sometimes labeled “blind as a bat”, but in fact bats (6) can see insects quite well when hunting at dawn and dusk. They also rely on a unique form of “vision” in the dark known as echolocation, where prey is located by reflected sound.

Animals that are hunted for food have eyes on the sides of their heads. Their greater peripheral vision allows them to spot approaching predators from the side, front and behind.

White tail deer (7), our largest prey animal, have eyes on the sides of their heads providing them with a 300° field of view. A slight turn of the head reveals the other 60°.

I have often heard people say that deer have great eyesight.  Actually if they were humans they probably would need glasses because they only have 20/40 vision.  As is true with most prey species, their eyesight allows them to notice even the slightest movement.  On my walks in the woods, deer spot me at quite a distance. Because I remain still, it’s not quite sure what it’s seeing.  After staring me down, snorting, and nervously stomping its front foot, the deer slowly comes forward to get a closer look.  With my slightest move, it high-tails away.

At birth, whitetail fawns (8) have a cloudy bluish-grey coating in their eyes. As a result the world around them is somewhat of a blur for a few days.

Gray squirrels’ (9) eyes are also located on the sides of their heads, but are positioned slightly upwards. This gives them the ability to search the skies for avian predators such as red-tailed hawks and eagles.

Green frogs (10) are near-sighted, which means they don’t see well at a distance, but their prominent eyes are so sensitive to movement that they would probably go hungry if their food source didn’t move.

Interestingly when green frogs capture a meal such as a dragon fly, its eye balls retreat into the roof of its mouth to push the dragon fly down its throat.

Great blue herons (11) are quite successful at capturing frogs because they stare at their prey with unblinking eyes and are patient and motionless hunters.

Many predators and prey alike possess a third eyelid called the nictitating membrane. This membrane acts like a windshield wiper, sweeping across the eye from side to side, moisturizing and cleaning the eye of debris. Eagles and owls can clear their eyes during flight, while herons, green frogs and soft shelled turtles (12) employ the membrane like goggles giving them a clear view underwater.

Garter snakes (13) which hunt on the ground use the membrane to clear dust and dirt.

Rock bass (14) and other fish with water constantly cleaning their eyes have no need for the nictitating membrane.

Let’s face it. The eyes tell the story.

The vaunted amenities of the Finger Lakes Region – its cultural attractions, scenic beauty, and quality of life – offer a wealth of resources…