Some thoughts on bees and local beekeepers

What do Scarlett Johansson, Morgan Freeman, and Sherlock Holmes have in common? They are all beekeepers. I was planning to gather them together here in a spoof of death by bees – until Peter Borst (now retired, he was senior apiarist at the Cornell Dyce Honey Bee Lab) stepped in and spoiled the fun.

When I revealed my plot, Borst scolded me: “Honeybees are gentle and seldom sting, and it’s important to convey that message.” Keeper Pat Bono says, “Everybody wants to know how often I get stung.”

Bees can get riled. Beekeeper David Hopkins tells how a few months back, he suited up to deal with hives just torn apart by a bear. “Those bear-attacked bees stung me mightily. Through my pants, up my pant legs, several at a time, on and on.”

But in terms of everyday beekeeping, with gentle handling, bees seem oblivious to the keeper. (Keepers, as a rule, speak highly of their bees.)

Most beekeepers wear protective suits and know when their bees are getting agitated. Teresa Welch of Bright Raven Farm and Apiary in Trumansburg says, “You can smell the attack pheromone scent they give off; it’s somewhere between apples and bananas.” That’s the time to blow smoke at them. It disguises the pheromone scent and makes them worry less about the keeper and more about why there’s smoke.

Honey bees instinctually avoid stinging, because to sting is to die. The barbed stinger stays in its victim but rips off part of the bee’s abdomen, dooming the bee.

If you’re stung by a honey bee near a hive, Borst says, “scrape off the stinger with your fingernail. It contains a gland that releases a pheromone (a strong scent) that tells the other bees you’re a threat.”

It’s All About the Honey

The great appeal of honey is that in its purest form, it’s a totally natural food. For the squeamish, it may be a bit too natural. In plain terms, honey is nectar modified by bee saliva. Nectar is the sweet liquid that flowers produce to attract bees, butterflies, and hummingbirds to come and pollinate them. Bees suck up the nectar and store it in a special internal pouch called a honey crop. By the way, honey is a female-produced food. Female bees make up over 95 percent of the hive and do all the work. And quite a few women are beekeepers.

When a bee fills its honey crop, it heads home to start the bee version of the spit, rinse, and dry cycle that makes honey. Arriving at the hive, it transfers the nectar into the mouth of another bee who mixes it with special bee saliva containing the enzyme invertase, which converts sucrose-based nectar into fructose and glucose, two simpler sugars better suited for storage. The bees repeat this process until they decide to use their hose-like tongues to deposit what is now honey into the comb cells.

The bees then fan their wings to evaporate excess water in the comb honey until there’s just over 18 percent water. Then they seal and preserve the honeycomb with wax exuded from abdominal glands.

In 1922, when archaeologists unearthed the 3,000-year-old tomb of King Tut, they found a jar of honey (did his beekeeper put it there?). They sampled it – still sweet.

Honey at a farm market stand with the sun streaming in from behind glows in seductively irresistible shades of gold, bronze, and amber that arouse deep instinctual cravings that make you want to dip a finger into it and lick off the oozing sweetness. We’re not alone. Bears, skunks, and raccoons have long endured bee stings just to sup this addictive liquid form of natural sugar.

Honey lovers generally know that the colors and flavors of honey depend on the season and flower nectar used. Pat Bono of Seaway Trail Honey believes that “all local honey is wildflower honey.” Her point is that you don’t really know where the bees go unless you DNA test the honey. She says, “I label my honey by the season.”

Many local beekeepers distinguish their honey from that of large commercial operations and big store offerings by emphasizing how they minimally process it to preserve its natural purity. Brent Welch of Bright Raven Farm and Apiary says, “Raw means that it’s not heated at all and isn’t filtered, so it’s in as natural and whole a state as possible. It still contains the pollen and propolis put there by the bees.”
Some beekeepers lightly heat honey to improve processing but avoid the high heat (145 degrees Fahrenheit) required to pasteurize it. Most strain or filter their honey to eliminate bee parts and comb pieces.

Some honey lovers prefer the comb because it isn’t processed at all.

From the Mouths of Beekeepers

There are likely several thousand hobby or sideliner beekeepers (those who want a little extra income) in the Finger Lakes Region. For them, it’s a joy and a passion – the few I met make that clear. Hopkins says, “I like bees because they smell so good. That’s my primal reason.” He elaborates: “The bees gathering goldenrod nectar and fanning it in the hive at night is just an intoxicating perfume. You should smell it.”

Shelley Stuart wants “to breed gentle bees for beginners” because “they’re really a joy to work with.” About beekeeping she says, “It just captivates me.” Perhaps more captivating is the mead Shelley makes from her honey (she sells mead making kits at meadmagic.com).

Sarah Meyer of Geneva mused on combining beekeeping and baking: “So I thought I’d try putting my sourdough starter in the hive every morning for a week and let the bees traveling in and out bring in wild yeast and pollen. I don’t even know if it works … but the bread from it tasted really good.”

Peter Borst, one of the area’s most experienced beekeepers, confessed he once donned a bee beard for an artist making a graduate thesis video. It involves wearing the caged queen under your neck to attract her swarm of thousands to cover and crawl on your face and chest. 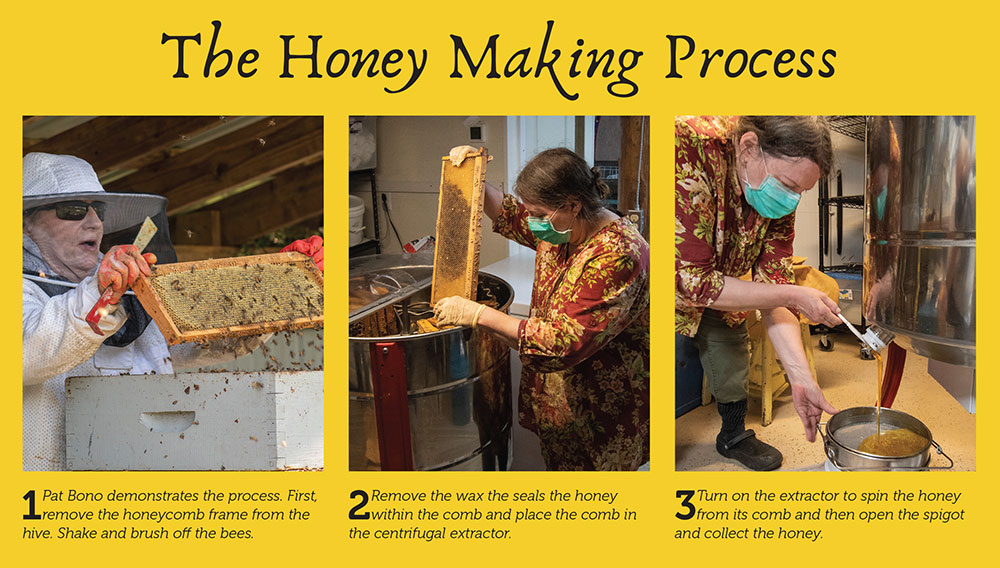 Every year, beekeepers hope that September brings an explosion of goldenrod and asters so bees can fill the hives with honey for winter (and because goldenrod honey is quite tasty).

David Hopkins explains that now is the time to get bee colonies ready for winter. “I want each hive to have a full box of honey, about 60 pounds,” he says.

Beekeepers dread winter. It’s common for them to lose a quarter or more of the hives. Seeing honey at a roadside stand, I went to the house and asked to see their hives. The owner told me, “That honey is the last of my stock. None of my hives made it through the winter.”

Many commercial beekeepers minimize the problem by shipping hives to the warm south where the bees avoid the winter die off and continue producing honey for further profits.

Shelley Stuart, former president of the Finger Lakes Beekeepers Club (FLBC), worries about the cold wind hitting her hilltop hives. “I’m going to wrap them this year,” she says. Hopkins, an officer in the FLBC, thinks “the key is keeping the bees free of varroa mites.”

Getting bees through the winter is a challenge. Extreme cold, mites, lack of food, excessive hive moisture, mice, and pesticide-induced health issues all contribute to the death rate.

Beekeepers pretty much get the winter off. But what about the bees? Like us, they try to keep warm. Shelley Stuart explains: “Bees form a cluster. They have the ability to shiver and form heat to keep the inner cluster warm.” Their primary goal is to keep the queen healthy so come March, she can start laying up to 2000 eggs a day to build up the colony.

Come spring, most keepers are resigned to buying bees to replace those that died over winter. Forty or fifty dollars a pound will get you about 3500 bees. About a penny per bee, but a costly proposition if you need 100,000 or more.

There is a cheap alternative: swarms. They appear in May and June. Beekeepers salivate at the thought of collecting a swarm. Free bees. Maybe 30,000 of them. And a chance to revel in the coolness of swooping in and fearlessly capturing a seemingly dangerous horde while being recorded on a dozen cell phones. In fact, swarms aren’t dangerous, so if you see one, just call a local beekeeper.

Sarah Meyer (workersransom.com) caught a couple this past spring. “I was heading out to my hives and saw a group of people holding their phones up, taking pictures,” she says. “I looked over to see them taking pictures of a swarm, so I got that one. Then I got a call from a friend and got a swarm off his dog house.”

Perhaps, it should come as no surprise that, like most of us, honey bees are not native to North America. Settlers brought them here in 1622. They must have decided that if they were going to stick around, they needed something sweet to get them through the winters.