To know someone in, or from Ukraine, is to know unspeakable heartache right now. Ukrainian-born violinist Solomiya Ivakhiv, upcoming guest soloist for the Orchestra of the Southern Finger Lakes, knows this ache. While her parents were fortunate enough to be vacationing in the United States at the time of the invasion, much of her extended family is still in the country, including her eighty-five year old grandmother, a survivor of World War II, her brother and his young family. Corning has a sister city in the Ukraine. It is Lviv. Incredibly, Solomiya comes from Lviv, her parents’ house is right in the city. CNN’s Anderson Cooper has been stationed in and reporting from Lviv. It was bombed by Russian artillery the second week of March, 2022.

Dr. Solomiya Ivakhiv is an Associate Professor of Violin and Viola at the University of Connecticut. Her latest album of classical music Poems and Rhapsodies, had just been released a week before the invasion. The recording includes the National Symphony of Ukraine accompanying her. The Grand Concert Studio of the Ukrainian State Radio Company in Kyiv in which it was recorded has since been bombed. Dr. Ivakhiv’s  previous album title represents the bitter hope and impossible heartache of an entire country, Ukraine: Journey to Freedom- A Century of Classical Music for Violin and Piano.  She also received the highest honor given to Ukrainian artists. Ache and irony abounds at that  honor, Dr. Ivakhiv was named Honored Artist of Ukraine, awarded on the thirtieth Anniversary of Ukraine’s Independence. Recently, in between performing scheduled concerts and benefits for Ukraine, Solomiya has been overwhelmed researching bullet proof vests and material that stops bleeding.

When Russian troops came across the border in the last week of February, 2022, fear was added to the heartache. Solomiya Ivakhiv’s mother and father just happened to be vacationing in Florida. Her father at the age of sixty, wants to return to the Ukraine – to fight. Both Solomiya and her mother keep pleading “Don’t go.” 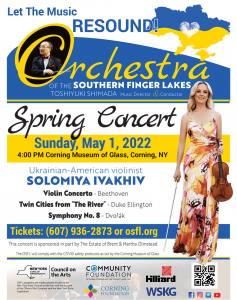 At the most recent Orchestra of the Southern Finger Lakes Concert (OSFL) in March, 2022 at the Clemens Center in Elmira, Japanese-American Conductor of the OSFL, Toshiyuki Shimada made a last minute addition to the program: the Ukrainian National Anthem. It was performed by the Youth Orchestra and the OSFL side by side as blue and yellow spotlights flooded the stage. As the entire OSFL stood to play, an elderly gentleman at the front of the audience rose to his feet, literally standing for Ukraine. Some were moved to wipe away tears while in ones and twos, the entire audience, with the exception of some for whom standing is painfully difficult, stood for the Ukrainian National Anthem. The long, vigorous applause was heartfelt. Hope is coming from all corners of the heart and of the nation. In a recent video, the Governor of Dr. Ivakhiv’s adopted state of Connecticut said “You are not alone … We stand with Ukraine.”

While she is slated to perform for the upcoming Orchestra Concert on May 1, 2022 at the Corning Museum of Glass, Solomiya’s brother has taken his wife and two small children to the border, left them, and stayed behind in Ukraine. His wife and their young children stood in line for two days, waiting to cross the border. Halfway across the world, help and hope came from Corning when the Russians invaded. Maestro Shimada of the OSFL has a musical colleague who referred the young family to a friend near the Slovakia/Ukraine border. Solomiya Ivakhiv’s young niece, nephew and sister-in-law were helped to safety in Poland. Other stories of help and heroism to aid the people fleeing destruction and death in their country are coming to light. Hope is not lost. When the Orchestra plays on May 1, let your heartstrings be pulled as the violinist from Ukraine plays. We need the healing power and hope that music brings. You are invited to play a part in the history, art and beauty of music, wielded by a slim, strong young woman with a violin. This concert is not to be missed at the Corning Museum of Glass. On that Sunday afternoon, stand with the Orchestra of the Southern Finger Lakes, Solomiya Ivakhiv and the people of Ukraine.

For more information go to osfl.org.