When Peter Blackwood retired from nursing in 2011, it was an easy decision to make professional photography his second career. Photography had been Blackwood’s lifelong hobby, and in 2006 he began to exhibit and sell his work. He focuses primarily on nature, wildlife, and landscapes, but also shoots weddings, portraits, and community events.

Photography is the focal point of many interests, including Blackwood’s love of the outdoors, wildlife, optics, and technology. When combined, the results are stunning fine art photos with personal meaning. “I love it when I’m doing a show and someone can see what I see in a picture that I’ve created,” he says.

To achieve that one meaningful image, Blackwood admits to taking “too many pictures” as he quietly observes natural settings, searching for that special moment. Afterwards, when studying a group of shots, he looks for a standout element: a certain expression captured on an animal’s face, an exchange between two creatures, or how animals interact with their environment. “Sometimes it’s a landscape scene that anyone would think ‘how beautiful’ if they were there,” Blackwood says.

The photographer, who lives in Canandaigua with his wife Tina, loves imaging local scenes such as the Squaw Island gulls on Canandaigua Lake, as well as wooded settings and open water landscapes in the Adirondacks and the Finger Lakes Region. He took several photographic trips to national parks in the American Southwest and, as an active member of an astronomy club in Rochester, he frequently photographs the night sky.

Memories in Black and White

Blackwood grew up near Syracuse, the youngest of three siblings. His parents shared a keen interest in photography and had a darkroom at home. From the age of 8, Blackwood photographed and developed his own pictures. He shot in black and white because the format was both simple to develop and affordable. After he began dating Tina in high school (they married while college students in 1972), he continued to take black and white pictures and later set up his own home darkroom. It was 2002 when Blackwood first began to shoot in color with a Fuji digital camera, and taught himself to process images on his computer.

The Blackwoods were newlyweds when they took an astonishing detour from college to enlist in the Army’s Buddy Program in 1973. They were given the option to train and serve together either photographing cadets or as military hospital medics. They literally flipped a coin to pick which assignment to accept. Medics won. Blackwood, a self-described “bleeding heart liberal peacenik,” chuckles now at this random decision propagated by his boredom with college. The Blackwoods were first stationed in Oklahoma and then in Germany, where Tina gave birth to their son Christopher in 1975.

When they returned to the States as a family in 1976, Blackwood’s stint as a medic was impactful enough that he made medicine his career path. He returned to school to study nursing and worked as an inpatient psychiatric R.N. at Strong Memorial Hospital for more than 30 years. The Blackwoods’ daughter Carrie was born in 1980, son Ian arrived in 1993, and the family moved to Canandaigua in 1998, where Tina worked as a special education teacher. All the while, Blackwood continued to shoot black and white pictures. Using Canon 35mm SLR cameras, he took photos of myriad subjects, most notably nature scenes and his children.

The outdoorsy family camped together often. Car camping and power boats at state parks developed into more serene boat camping in the Adirondacks, where they would paddle to waterside campsites. Blackwood’s all-time favorite to visit and photograph was – and is –Forked Lake.

Retired nurse Kate Murphy worked with Blackwood at Strong Hospital and recalls how he would bring in his photographs to share with staff. Murphy, who lives on Conesus Lake, is drawn to nature photos. She has purchased nine Blackwood works. “He is a gentle, funny, knowledgeable man and an amazing nurse, but overall a true artist,” she says.

Murphy’s favorite, called “Talking, Not Talking!,” is a hilarious commentary on relationships illustrated by two Anhinga birds. In one photo they face each other and appear to be arguing and in the other they turn away from one another. Framed together, it is a highlight in her home.

Though Blackwood would formalize Blackwood Photography after his retirement, many locals were already familiar with his work hung in public spaces, galleries, exhibitions and in private collections. Cheshire resident June Oates attended Blackwood’s first solo exhibit at Wood Library in 2006 and purchased “Adirondack Peace,” a black and white image of a lone canoe tied to a rustic dock on Forked Lake. “It’s very calming, peaceful and serene, with the lake smooth as glass,” says Oates, who owns several Blackwood photographs.

After two solo library shows, Blackwood assumed the volunteer role of art exhibit coordinator, giving other local artists and photographers exhibition opportunities. “Peter’s sharp attention to detail, close ties to the artist community, and his easygoing nature make him the perfect person for the job,” says Executive Director Jenny Goodemote. An active library volunteer, Blackwood is also a Friends of Wood Library board member and photographs Wood events pro bono. Annual Portrait Days (this year scheduled for December 4-6) offer affordable professional portrait sessions with Blackwood, who donates all his fees back to the library.

Blackwood and his wife volunteer together at the library and at the Ontario County Arts Council (OCAC), where Tina, a fiber artist, is a board member. Their works are shown in OCAC member exhibits, and Blackwood is part of an OCAC program where his work is displayed at various Ontario County businesses and rotated in three-month intervals. He is represented by the Pat Rini Rohrer Gallery year round, and has been a repeat guest artist at the Jeanne Beck Art Gallery & Studio, both in Canandaigua. “When Peter exhibits in my gallery, I have ample time to appreciate his eye for detail and develop new favorites,” says Beck, a mixed media artist. “We own one of Peter’s photographs, an Adirondack celestial night scene with an incredible display of stars and moonlight.”

Nature plays a starring role in the Finger Lakes, a natural backdrop that some of us may take for granted – but not Peter Blackwood. “Peter’s photography is a reminder of the life around us,” says Goodemote. “His breathtaking photos force you to slow down and appreciate its beauty and fragility. He can easily take you to another place, even if it’s only a few miles away.” 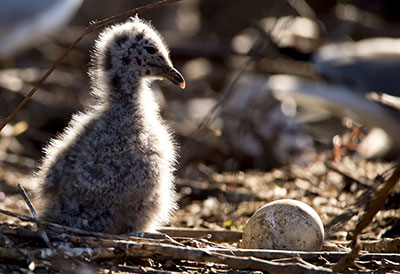 On Canandaigua Lake’s Squaw Island, Blackwood imagines that the young seagull chick staring at an unhatched egg is hoping for a future sibling. The feeling of loneliness is accented by warm, rich coloration created by the strong backlighting of the sun.

To capture tender images like this, Blackwood patiently monitors the island’s gull rookery, with repeated trips to track the progress of about 100 nests. No chicks were present in mid-May, but later that month, when this photo was taken, they were abundant.

Circling the island slowly in an ultralight canoe, Blackwood keeps his distance for the birds’comfort level. For this photograph, he used a Tamron 150 to 600mm lens at 500mm, a strong telephoto lens. A fast shutter speed of 1/2000 of a second accommodates the telescopic view and mitigates the rocking of the boat.

Direct sunlight left the image a bit underexposed, but shooting the image in RAW format allowed more exposure latitude in post processing. Using Adobe Lightroom software, Blackwood reduced the highlights of the chick’s downy surface and brightened other details, including the shadowed sides of the bird and the egg.

Blackwood is a guest artist at Jeanne Beck Art Gallery & Studio in Canandaigua, October 1-November 1. Meet the photographer at Beck’s gallery on Saturday, October 3, with a free reception 1 to 4 p.m. Blackwood also has a solo show at 1570 Gallery at Valley Manor in Rochester, November 16-January 10.

View the photographer’s work at blackwoodphoto.com.