Story and photos by James Schwartz

Live-music aficionados with their ear to the ground may have heard a little something about “Tunes by the Tracks,” (TBTT) a bi-weekly event held at the Clifton Springs Library. Imagine spending a couple of hours enjoying performances by noted professional musicians, open-mic performances by talented, local folksingers and songwriters, and a healthy dose of humor, stories, and genuine down-home friendliness. With all of these ingredients it is no wonder TBTT has become a favorite way for many folks to spend a weeknight evening in Clifton Springs. 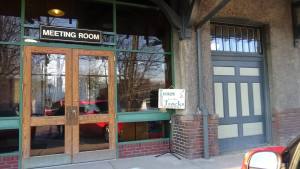 Jim Clare is, according to Allen, “the overall, sort-of, MC around here.” Jim grew up in Waterloo, but his life has taken him far from the Finger Lakes. He has been a Navy jet pilot, he has been in business, and he has been a ski instructor. He currently makes his home in Canandaigua. His musical gifts are evident when he plays one of his many original songs. If you meet him, be sure to ask him about his bicycle song. Or the train song. Or, well any of them. They’re all wonderful.

Cathy McGrath has an interest in genealogy, and has traced her “roots” back through several generations. She has found “hundreds” of relatives throughout the Finger Lakes region. The Irish/Celtic flavor of her ancestry is clearly evident in the music that she pursues. In addition to being a “rock-solid” rhythm guitarist (according to Allen), she also plays flute, some banjo, wind instruments, and is a member of two different all-female string bands. These bands, Cuisle Mo Chroí (say Cushla Mo Chree) and Steppin’ Out, specialize in Irish, Gaelic, and Celtic music. They also provide music for contradance and Irish dancing. Cathy thinks she has probably played for “thousands” of dances! Cuisle Mo Chroí has been the featured band at the TBTT Christmas program for several years running. This is a show not to be missed.

Allen is a man of many talents. During a typical TBTT evening you’ll hear his mandolin, banjo, harmonica, and whatever else he feels like playing. According to Cathy, he knows every lyric for every song he’s ever heard. He takes great delight in getting audiences to sing along. In 1971 he helped to start the Golden Links Folksinging Society in Rochester, and this group is still going strong. At the Turtle Hill Folk Festival each year he typically leads a sing-around, keeping people singing late into the night. He has an interest in Civil War history, and in particular, the music of the Civil War. He has an impressive collection of period instruments. He will perform the music of the Civil War, giving a historical and emotional context to the songs.

What will you experience in an evening at TBTT? Arriving at about 10 minutes before 7 on a Wednesday evening, you may find the library’s parking lot nearly full. When you enter the performance room at the left side of the library, you’ll find a space with about 50 seats; a small performance area with microphones and a chair or two; a table with cookies, coffee and cider (for later); a basket for donations (usually $5 per person recommended – all of which goes to the featured musician); a number of people busily making final preparations; and several musicians tuning their instruments. A couple of minutes after 7PM, either Allen or Jim will get everyone’s attention with a bit of homespun humor, and then the hosts will perform a song to open the evening.

After this opening song, one of the hosts will introduce the main performer(s) for the evening. Allen is a virtual storehouse of knowledge about the musicians, so he’ll give some fascinating background information, and then he’ll turn the stage over to the main guest(s) for the night. The guest musicians are highly accomplished, skilled artists, and they bring local, or regional, or even national notoriety. For the next hour or so, you are in for a treat. Whether the musician is a blues artist, a Celtic performer, a bluegrass specialist, a folksinger, or something else, you can be sure that you will be entertained. The audience at TBTT is used to singing along with the performers when they know the music, so don’t be surprised when you hear this. Join in!

By about 8:00, the featured performer(s) will be ready for a break. Snack time! The cookies are home-made, (of course), and they are plentiful and free. During the break, if you would like to take advantage of open-mic time and offer a song yourself, you need to let Jim Clare know. Jim may seem busy chatting with everyone, but rest assured – if you speak with him about your desire to perform, he will remember and he will put you on his mental list. When the break ends at 8:15 or 8:20, it is time for “Mystery Pickers,” the TBTT name for open-mic time.

Mystery Pickers is no less entertaining than the main performances of the night. Talent is abundant among the Mystery Pickers, and there is no shortage of variety in their musical offerings. Once again, the audience is used to singing along when they hear a song that they know, and it doesn’t take them long to pick up a song that they’ve never heard before. By 9:00 or so, the featured performer returns to the stage for another short set before the evening ends.

It is impressive that TBTT has been a fixture in Clifton Springs for over ten years. Jim says that, “it was purely good fortune that the Clifton Springs Library was here and has been so good to us.” The adequate parking, the comfortable temperature, the clean restrooms, all make for a reliable, year-round comfortable venue. Musicians love to play there. The library benefits, too, from its relationship with TBTT. Once a year, the TBTT performance is a benefit concert for the library. Word is, this event has often been the library’s largest single donation in a given year. You can learn more about TBTT, including their entire year’s performance schedule, by visiting them on FaceBook. (Click on “Files” to find the performance schedule).

Dr. Konstantin Frank is undoubtedly one of the leading producers of vinifera wines in the Finger Lakes, but at times it is an easy…