I’ve heard it said that sad news comes in threes. In the last two months, nature and wild animal lovers have lost three remarkable men whose contributions to conservation and wildlife research and education will leave a lasting imprint on a great many people and at least two species of wildlife. And I have lost three very dear friends along the way.

Thomas J. Rauber, Sr., of Dansville, peacefully passed away in his sleep on the morning of Wednesday, December 27 at the age of 93. Two months before that, 65-year-old Michael Allen of Stanley slipped away in a coma on October 28 after a long illness. Both men had worked together for years – one as a volunteer and the other as a wildlife Endangered Species specialist – to bring the bald eagle back from the brink of extinction. And they succeeded.

In 1965, Tom Rauber – then a 42-year-old telephone company lineman, amateur naturalist, and state-licensed wildlife rehabilitator – discovered the last known pair of nesting bald eagles in New York State at the south end of Hemlock Lake and witnessed their continuing failure to hatch an egg. Because the bald eagle population was in serious decline and the species was protected by federal law, Tom reported his find to the U.S. Fish & Wildlife Service district office in Albany. The agency asked if he would monitor the nest and document his findings and he agreed.

In 1974, as the result of Tom’s meticulous observations and research, the New York State Department of Environmental Conservation contacted him with plans to initiate a bald eagle recovery program and asked if Tom would help set it up. Once again he agreed and in 1976 – the year of the U.S. Bicentennial – New York became the first state in the nation to implement a comprehensive bald eagle recovery program under the voluntary guidance of amateur naturalist Tom Rauber.

Fresh out college, DEC’s newest hire – Mike Allen – was assigned to work with Tom. One of Tom’s first tasks was to show Mike the ropes and he did exactly that by teaching him how to climb with lineman’s gear. The two men built an elevated blind from which they observed and photographed the two remnant birds in their nest for a number of years as they reared a dozen or so foster chicks, which the two men placed there.

You can read their amazing story in this 2009 Life in the Finger Lakes magazine article: lifeinthefingerlakes.com/brink-extinction.

I was further saddened to learn that my good friend and fellow photographer Charles Alsheimer of Bath, died suddenly at age 70 on December 30 – the same day that I delivered a eulogy at Tom Rauber’s funeral Mass. Charlie was not only a dear friend but he was a bit of a mentor to me as well. When I told him of my bucket list plan for a month-long photo-driving tour of the American West and Rocky Mountain states after I completed six months of chemotherapy in August 2016, Charlie strongly suggested that I add British Columbia and Alberta, Canada, to my itinerary. He even pinpointed places where I could find the best opportunities to photograph wild Rocky Mountain elk and bighorn sheep. I took his advice and returned home with thousands of the best wildlife photos I have ever taken. 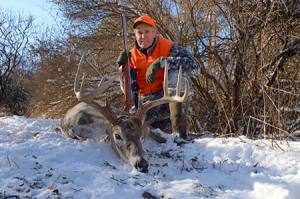 I spoke with Charlie by phone a week or so before Christmas and we talked about getting together after the holidays. He sent me this photo, which shows him with an elusive 9-point buck that he was finally able to harvest on the last day of the 2017 muzzleloader season. It is yet another example of Charlie’s persistence in accomplishing his goals.

Even though he traveled extensively to photograph a variety of wildlife, Charlie was America’s foremost expert on whitetail deer behavior and quality deer management and he became a legend among wildlife photographers for his incredible whitetail deer images. He was the longest-serving field editor for Deer & Deer Hunting magazine and had hundreds of magazine covers and thousands of magazine articles to his credit – including Life in the Finger Lakes magazine –as well as number of television programs and whitetail deer film presentations. Charlie also authored eight books on whitetail deer and deer hunting strategies. You can see some of his work and order a book here: charliealsheimer.com.

And like Tom Rauber who proudly served in General George Patton’s Third Army in Europe during World War II, Charlie proudly served in Vietnam. And all three men were American Patriots – and faithful Christians – right to the end.

In 2013 Mike Allen and Tom Rauber were awarded commendations by then-DEC Commissioner Joe Martens for their dedication and persistence in bringing the bald eagle back from the brink of extinction. Last July, Tom was awarded Rotary International’s Paul Harris Fellow Award for his work in bald eagle research and species recovery. Other notable figures that have been named Paul Harris Fellows include U.S. President Jimmy Carter, Russian President Boris Yeltsin, U.S. Astronaut James Lovell, and Dr. Jonas Salk. Paul Harris was the founder of Rotary International.

And while sad news may indeed come in threes, we are all richer for the accomplishments of these three men. Let us be inspired by their determination.

06/13/2018 by Gabrielle L. Wheeler We drove on the back roads, some unpaved and some without telephone lines following along, until we met Rt…