This is no ordinary Sicilian, and it almost certainly will never travel to the Mediterranean island it’s named after. And, unlike most human Sicilians, this one took almost a year to find its way into the world. Which it finally did on August 18. 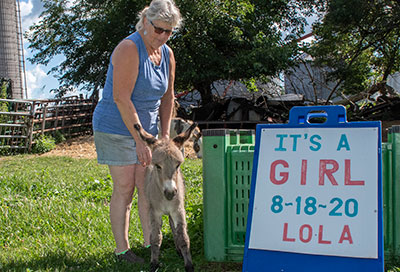 Just who is this Sicilian? It’s Lola, a baby miniature donkey; to be exact, a Sicilian miniature donkey. It belongs to Janice, part-owner of the Ellsworth farm outside Fairport. She also manages the produce stand, and had let her many customers know that a baby was on the way. Not that she could hide it. The expectant mom lives in the corral next to the produce stand and was clearly bulging. With a gestation time of 365 days, the big question was when. By July, the answer was obvious. Soon.

Janice took me into the corral to meet Lola. Upon spotting Janice, Lola trotted over and nudged her. Janice wrapped her arms around her and hefted her up like a baby—a big, 40-pound baby.

She explained, “Lola loves to be hugged. Sometimes I come in and sit down on a pail. She comes over and nudges me until I pick her up and hold her on my lap.”

Janice says she spends time with Lola so she’ll imprint on her and be comfortable with humans. I can attest to Lola’s comfort with humans. In trying to photograph her, I tried to back away to get a full body shot while also showing some of the farm. Before I could take the picture, Lola would be upon me, pushing me with her nose to get petted. Just like a dog. And her parents were equally bad, with her father picking up and taking off with my camera bag. 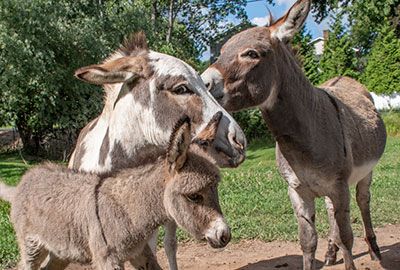 Normal donkeys get as big as a horse but Sicilian miniatures only get about three feet at the shoulder. Goats, Scotch Highland cattle, and llamas spice up Janice’s menagerie. But what really stands out about the Ellsworth farm are the several hundred sheep grazing its 120-acres of Fairport farmland rolling between soccer fields and suburban developments.

Even now, after years of driving by them weekly, the vast flocks of sheep surprise. Often hidden in a swale, you don’t see them until you top a roadside hill. Then, as you crest the hill, suddenly, hundreds appear, scattered across the bright green pasture flanked by trees and a backdrop of two large, wooded hills.