story and photos by Helen Heizyk

Hummingbird migration is in full swing and it’s almost time to put out our hummingbird feeders here in the Finger Lakes. The only hummingbird to be expected regularly in New York State is the Ruby-throated Hummingbird. Each year, hummingbirds embark on two migrations – one north and one south. These journeys, which can span hundreds or thousands of miles, require immense preparation and an enormous amount of energy from these small birds – the smallest in the world.

Their spring migration north, from South America and Mexico up to Canada, is a solitary journey with the goal of getting to their breeding grounds early enough to claim the best feeding territories. With that sort of pressure, this hummingbird migration can begin as early as February in Mexico and finish in mid-May in Canada and Alaska. The migration is spread over a three-month period, which prevents a catastrophic weather event from wiping out the entire species. This means that a few birds will arrive at any location very early, but the bulk of the population will follow later. Once in North America, migration proceeds at an average rate of about 20 miles per day, generally following the earliest blooming of flowers hummingbirds prefer. 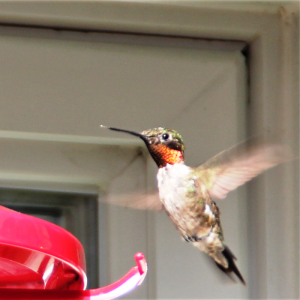 I try to get my nectar feeders out by May 1st because year after year there are a couple of hummingbirds that announce their return by hovering right outside our dining room window as if to say ‘Hello! We’re back!’. As it turns out banding studies show that each bird tends to return every year to the same place it hatched, even visiting the same feeders. How fun is that!

You can attract Ruby-throated Hummingbirds to your backyard by putting out special hummingbird feeders or by planting tubular flowers. In your feeders use one part ordinary white cane sugar to four parts water. It’s not necessary to boil the water though I do heat it to help the sugar dissolve faster. Store unused syrup in the refrigerator for up to two weeks. You do need to change your feeder’s nectar on a regular basis, even if it looks like it hasn’t been touched. During hot weather, change it every two days. In milder weather, once a week is fine.

Hummingbirds are carnivores (nectar is just the fuel to power their flycatching activity) and depend on insects that are not abundant in subfreezing weather, so they migrate back “home” to Central America in the winter or risk starvation. Some adult males start migrating south as early as mid-July, but the peak of southward migration for this species is late August and early September. By mid-September, essentially all of the Ruby-throated at our feeders are migrating through from farther north, and not the same individuals we saw in the summer. In fact, hummingbirds migrate south at the time of greatest food abundance. When the bird is fat enough, it migrates. It’s not necessary to take down your feeders to force hummingbirds to leave, the ones stopping by in September are already migrating anyway. If you remove your feeder, birds will just feed elsewhere, but may not bother to return to your yard the next year. It is recommended that you continue to maintain feeders until freezing becomes a problem.

Did you know that you can follow the hummingbird migration and even report your own first of year sighting? Just click on one or both of these great interactive migration websites and zoom in to the northeast to see where the latest hummingbird sightings have been reported. Happy birding! 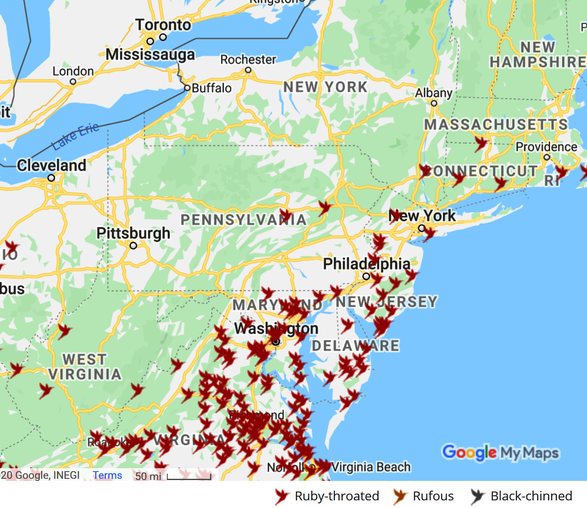