Native Americans called February the month of the Hunger Moon. That’s because most fish and game are difficult to come by at this time of year and plants are dormant. Some creatures are hibernating and others are just lying low to conserve energy because times are hard for them as well. And predators for the most part are no doubt the hungriest of all.

That’s because February is also a time for courtship. Coyotes and foxes are mating now, which is why you may smell an offensive pungent odor in the woods. The males of both species mark their territories by urinating on just about every tree in sight and that overwhelming aroma emits a bitter skunky smell. Sometimes it’s strong enough to make your eyes water. Groundhogs and chipmunks are also emerging from hibernation in order to mate but they’ll soon return to their burrows to finish their winter snoozes—as long as they don’t end up becoming a meal for some famished coyote, fox, or owl. Great Horned owls, another predator of rodents, are also nesting now and the males are hunting day and night in order to feed their incubating mates. 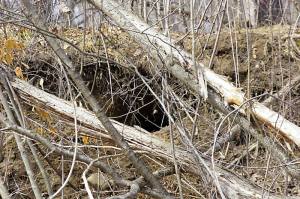 Mother black bears have recently given birth to anywhere from two to five cubs inside their winter dens.

February is a time for babies, too. Some female black bears, which have been denned since before last Thanksgiving, have recently given birth to anywhere from two to as many as five cubs. Black bears are not true hibernators but with mom in a state of torpor while denned, she is unaware that she has given birth. Blind and hairless, newborn bear cubs are about the size of a chipmunk. But due to the rich nourishment of mother’s milk, they’ll weigh about five pounds by the time they’re six weeks old. Female black bears only give birth every other year, which means that other mothers are denned with yearling cubs that were born last winter. Yearlings will stay with their mother until May, when she’ll chase them away so that she can mate again.

John has been a published writer/photographer for 40 years and is a 4-time award-winning member of New York State Outdoor Writers Association. Two of those awards were for these “Life in the Finger Lakes” articles: Plight of the White Deer and From the Brink of Extinction.

Photography has taken Lisa Carp from small towns in Vermont and Maine to the Oval Office and the New York photo scene. She has…