Story and photo by Madis Senner

Located on Hydesville Road (1510 Hydesville Road) in Newark, New York is the memorial to the Fox Sister’s home. It was here on the evening of March 31, 1848 that Maggie and Kate Fox heard mysterious rappings that turned out to be a dead peddler that had been murdered in their home years earlier. It was not long before they developed the ability to communicate with the spirit of the peddler, as well as other spirits. They became mediums; and along with their older sister Leah helped launch the Spiritualist Movement.

Unfortunately history is remiss because it has failed to recognize the significance that the Fox Sisters and the Spiritualist Movement has had in shaping America and the world. Instead today when we think of mediums we envision psychics with their hand out and places like Lily Dale. But back in the day things were much different. 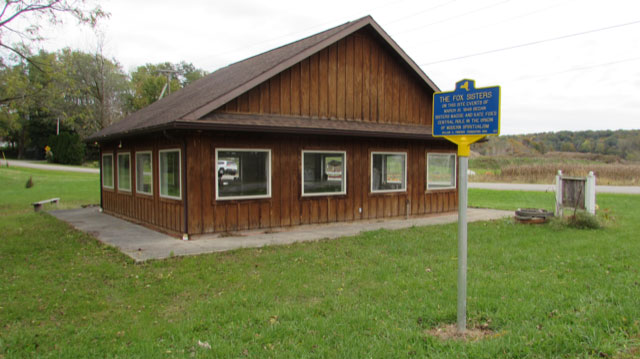 On July 19, 1848 shortly after the Fox Sisters heard their mysterious rappings a few miles away in Seneca Falls, NY the first Women’s Right’s Convention was held and the Women’s Rights Movement was born.  The Spiritualist Movement would help propel it. As Harvard Divinity School professor Anne Braude tells the “American Women’s Rights Movement drew its first breath in an atmosphere alive with rumors of angels.”

Spiritualism exploded in popularity. It empowered people and liberated them from the control of the church that saw itself as the sole medium to the divine. It also empowered women. Mediums were primarily women and were given prominence and spoke publicly which was unheard of at the time. According to Braude Spiritualism became the  “central agent of feminism.” Noting that while many women’s advocates were Spiritualists, not all were, but all Spiritualists were women’s advocates.

Spiritualists also swelled the ranks of Abolitionism, Food Reform, Temperance and other causes.  As theologian John Buescher informs us,

“Many…who turned to Spiritualism sensed a biblical millennium, which manifested itself in plans for egalitarian utopias where humans mingle with angels or become angels themselves. Thus, Spiritualism was not just a means of contacting the spirits of the deceased or of exploring the afterlife. Rather, it meant the opening wide of a gate between a perfect Heaven and an imperfect Earth. This idea provided a link between Spiritualism and social reform.” 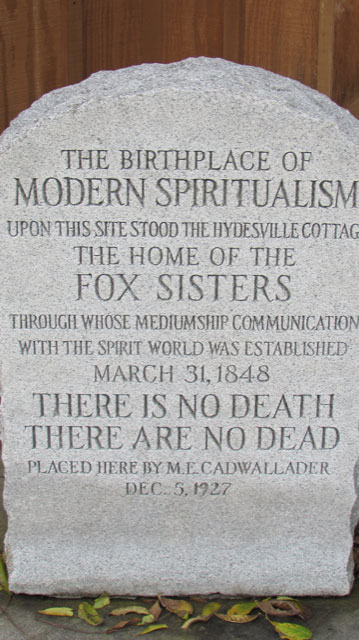 While the sway of Spiritualism began ceding as the 19th century waned its embers still glow.  What is referred to as the “New Age Movement” can trace its roots back to Spiritualism, Madame Blavatsky and Theosophy born in NYC in 1875 and Eastern Teachers such as Swami Vivekananda  who traversed NY and America espousing Hindu concepts and teaching meditation.

According Pew Research more than a quarter of Americans see themselves as being “spiritual but not religious”  and our ranks are growing fast.

Colin Dickey in his best selling book Ghostland: An American History in Haunted Places believes that Spiritualism like Transcendentalism has been woven inextricably into the fabric of American consciousness. That much of what we accept as canonical in our culture today was influenced by Spiritualism, saying, Spiritualism may have lost its influence by the end of the 1920’s, but it might be more accurate to say that it went mainstream. The percentage of Americans who identify as Spiritual and not as religious has been slowly creeping up ever so slowly in recent years as people turn from organized churches and seek their own spiritual path. Meanwhile our belief in ghosts remains high…73%”

As a history a buff and someone that is fascinated by the role that upstate NY has played in shaping America and the world I encourage you to visit the memorial to the Fox Sisters in Hydesville. Place can be powerful, and this spot is a testament to that.

Madis Senner is an author who lives in Syracuse. You can read his musings at, http://motherearthprayers.blogspot.com His latest book is Sacred Sites in North Star Country: Places in Greater New York State (PA,OH,NJ,CT,MA,VT,ONT) That Changed the World  is available at Amazon and at the Dogged Ear in Palmyra, NY https://www.thedogearedbook.com

• John Buescher, The Other Side of Salvation: Spiritualism and the Nineteenth-Century Religious Experience.

11/08/2021 By  Melanie Greaver Cordova On a clear Saturday morning in early October, a caravan of veterinary students winds its way through vineyards and…