With the gift-giving season approaching consider a book for someone on your list. One new title takes readers to the final resting spots of many significant Americans. Another reveals new details about those who travelled the Underground Railroad through Wayne County. How about a mystery in the fictional museum at Lighthouse Cove, a pictorial history of a favorite amusement park, or an insightful look at a Rochester festival that celebrates imagination? For younger readers there are engrossing stories about growing up in Finger Lakes locales and a tale of an immigrant who became a worldwide entrepreneur. 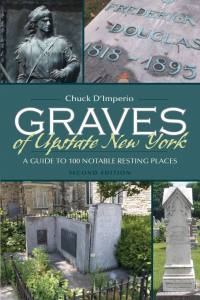 A Guide to 100 Notable Resting Places

What do the Twilight Zone creator, Rod Serling, abolitionist Harriet Tubman, and aviator Glenn Curtiss have in common? Their graves and those of 97 other notable individuals featured in this title are found in upstate New York cemeteries. Serling’s final resting place, marked by a government-issued military gravestone, is in Lakeview Cemetery in Interlaken. Tubman’s much-visited simple grave site is found in Auburn’s Fort Hill Cemetery while Curtiss has an imposing monument in the Pleasant Valley Cemetery south of Hammondsport.

The first edition of D’Imperio’s grave-themed book published more than ten years ago featured 70 celebrated Americans. Its success prompted adding 30 more noteworthy people for this second edition. The short informative biographies of each individual are enjoyable reading and in no way morbid, regardless of the focus on gravestones and mausoleums.

As with D’Imperio’s several other books about Upstate New York, for the sake of simplicity “Upstate” means anywhere outside of New York City. Helpful directions to gravesite locations, extra factoids, and website links for more information make the book a great companion for road trips through the Finger Lakes region and beyond. 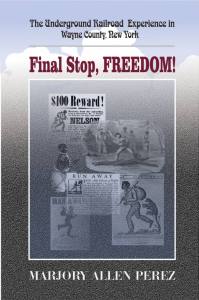 Perez, the Wayne County historian from 1972 to 1999, brings to light many individuals overlooked in the telling of history. The author spotlights numerous African American men and women who made their way out of slavery rather than focusing on the better known Underground Railroad conductors. Perez identifies these “freedom seekers” who made their way to live in and around Wayne County and writes biographical sketches based on research conducted into public records, family archives, and published histories.

The content is organized by distinct time periods beginning with 1789 to 1827 when Wayne County was first being settled and owners from southern states brought their slaves. The period of 1827 to 1850 saw slavery outlawed in New York but with the enactment of the federal Fugitive Slave Law of 1850 free states no longer insured the safety of slaves seeking refuge. The historian refers to 1850 to 1863, the period which includes the Civil War and culminates in Lincoln’s Emancipation Proclamation, as the “most dramatic of the Underground Railroad.”

Amply illustrated and indexed, this well-written book makes a valuable contribution to this subject. The author’s subsequent book, out this fall, is Freedom, A Shared Sacrifice! New York’s African American Civil War Soldiers. 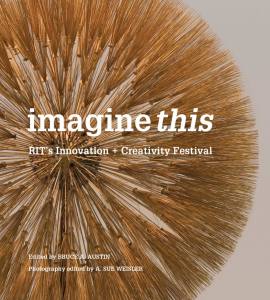 Edited by Bruce A. Austin

Photography edited by A. Sue Weisler

Beginning in 2008 one of the region’s leading institutions of higher learning, Rochester Institute of Technology (RIT), has presented an annual festival celebrating innovation and creativity. Since then, for one day each spring, thousands of visitors arrive on the campus to participate in hundreds of interactive presentations, hands-on activities, and displays. Over the past decade Imagine RIT: Innovation and Creativity Festival has become a signature event for the university, building pride within the academic community and enticing future students.

This comprehensive overview of the festival is presented through essays written by those who have organized and steered this popular free event. Authors include former RIT President Bill Destler, credited with coming up with the concept for the festival early in his presidency.

The numerous full-page high quality photographs reveal an endless variety of imaginative exhibits attracting crowds of onlookers. These are sometimes amusing – like the “human-powered bike blender” with a peddler burning calories while whipping up a smoothie in the blender perched on the bike. Alternatively, other examples demonstrate serious applications like the computer-guided glove which controls involuntary tremors in the wearer’s forearm. This large attractive hardcover book will surely entice readers to participate in the festival first hand. 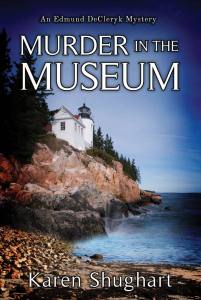 Murder in the Museum:
An Edmund DeCleryk Mystery

For mystery enthusiasts, here is a crime tale set in a quaint fictional village on the shores of Lake Ontario. On a cold November day, the dead body of Emily Bradford, a Lighthouse Cove Historical Society and Museum board member, is discovered on the beach at the base of the bluff behind the historic building. To uncover what led to a break-in at the museum and Emily’s tragic death the local police force is joined by retired investigator, Ed DeCleryk. The plot takes an unexpected turn when someone confesses to the crime. DeCleryk, however, continues his investigation, determined to learn whether or not a copy of an old map that he and his wife Anne found at the crime scene and a shipwreck on Lake Ontario in the 18th century is somehow connected to the murder.

The publisher, Cozy Cat Press, specializes in gentle mysteries with no graphic violence, explicit sex or profanity. Anne DeCleryk enjoys cooking and recipes she prepares for her husband and guests, such as her “Spicy Fish Chowder” are offered at the book’s end.

The author has previously written two nonfiction books. This is her first novel and the first in her series of Edmund DeCleryk Mysteries. 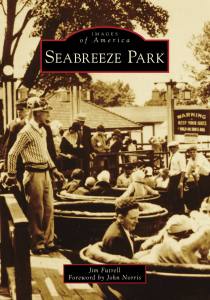 Summer is the season of amusement parks. A few of these family-oriented operations survive and continue to attract both repeat and new visitors. Seabreeze Park, which began operating in 1879 on the shores of Lake Ontario, is the fourth-oldest operating amusement park in the U.S.

The book, one of the publisher’s Images of America series, was written by an historian for the National Amusement Park Historical Association. Its abundant archival images chronicle the park’s development and continual adaptation to shifting trends and needs. Seabreeze has long been overseen by members of the Long, Norris, and Price families. New attractions and rides have been added, others updated, some sadly destroyed, and replaced. One longtime constant is the Jack Rabbit roller coaster, built in 1920, which may be the most famous and the second oldest operating wooden roller coaster in the world.

At the heart of Seabreeze is its carousel, which arrived from Philadelphia in 1904 with George Long, Sr. Its destruction by fire in 1994 was devastating but its rebuilding over the next two years resulted in the ninth carousel created by the family. This book is sure to draw newcomers to the park eager to experience what earlier generations have for so long enjoyed. 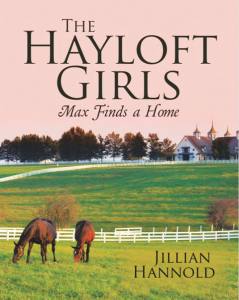 Growing up in the small town of Walworth in Wayne County provided the author with inspiration for this book about two young girls and their love of horses. Danny, a runaway from foster care and Max, who escaped from an orphanage after losing her parents, meet in the hayloft of a horse farm where each has taken shelter. Their futures uncertain, Danny and Max gradually begin to trust each other and soon a bond develops between these girls who have experienced so much loss and loneliness.

Their passion for the horses helps the girls feel more hopeful. When they suspect the farm has hit hard times and is laying off workers, Danny and Max take responsibility for the animals by carrying out the daily chores. However, the predicament remains as to how to avoid discovery by the owners of the farm.

The dilemma faced by Danny and Max and their determination to be free will appeal to readers ages 9 and up. The author’s first book brings a strong feeling of authenticity. It draws on a make-believe game she played in haylofts with her friends and while caring for her own horse. 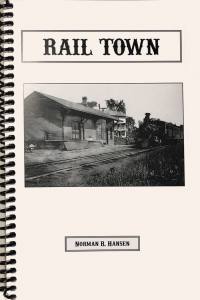 Rail Town is a blend of fiction and nonfiction. Set during the latter months of World War II, from 1944 to 1945, the book relates the adventures of a young boy growing up in the village of Himrod on the west side of Seneca Lake. Hansen, the grandson of Danish immigrants, says the book is largely autobiographical. Many incidents involve the railroads. With 16 trains passing through Himrod daily, many residents were employed by the railroad. Pivotal to Hansen’s life stories is the Eagle Hotel, owned by the Hansen family from 1900 to 1968.

Each chapter tells a complete story. “Speed Causes Accidents” relates a misadventure on a new bike. Another recalls the legendary blues musician, Muddy Waters, who traveled through Himrod on his way to New York City. The African-American needed a place to stay that allowed blacks. Waters was welcomed at the Eagle Hotel where he memorably performed one night on his guitar for the locals.

Sketches to illustrate this collection of stories have been provided by the author’s granddaughter. The book will be enjoyed by different generations, although due to a few mature situations, it is most appropriate for ages 12 years and up. 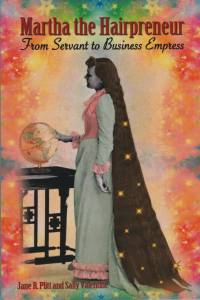 From Servant to Business Empress

Martha Matilda Harper led a remarkable life. This fictionalized biography tells how this real woman overcame many obstacles including a life of servitude to become a highly successful entrepreneur. Harper immigrated to America in the late 19th century armed with a formula for an herbal hair tonic, a dream, and incredible determination. While working as a maid, her employers helped her to launch her business from their Rochester home. This was the beginning of a worldwide empire of over 500 Harper Method hair and skin salons.

Readers from about 9 to 13 years of age will find out how Harper helped poor women become business owners and, in the process, invented the retail franchise system. She is also credited with designing a chair that went backwards so washing hair was easier. Her customers included prominent historic women, including First Ladies.

This well-researched book is by authors Sally Valentine, a retired classroom teacher of 30 years who has written a series of middle grade novels, and Jane Plitt, the author of both an adult biography, and a children’s picture story about Harper (see next review). Readers will enjoy the pencil illustrations by Leia Madden and Suzanne Valentine. 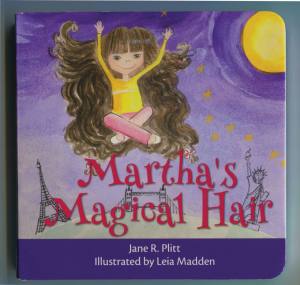 The life of Martha Matilda Harper is adapted for very young readers. The small board book format features Leia Madden’s colorful illustrations that have a contemporary style and charm. It may surprise young girls to learn that at their age Harper was a servant in Canada possessing neither toys nor friends. It was her floor-length hair which offered comfort to the youngster, who had experienced great loss and cruelty. Ultimately, her hairstyle is her trademark when she becomes a successful business owner.

At the bottom of each page to encourage self-awareness, insight and imagination, a question is posed, such as, “How long is your hair?” or “What do you dream about?”

Author Jane Plitt is a visiting scholar at the University of Rochester and an award-winning businesswoman committed to women’s rights. Through her books Plitt has brought Harper’s extraordinary life to the public’s attention.

08/22/2019 By Gabrielle L. Wheeler Recently, we were all sick in my house with one thing or another and for a week we were…