As April dawns, it appears spring has officially settled over the Finger Lakes Region, including outside my own front door. Pleasant mornings of clear blue skies and warm, sunlit afternoons become rare jewels throughout the long winter months on South Hill in Ithaca, but the return of cloudless skies and lush green grass and trees over the past two weeks have declared an end to winter, for now. Today I’m using this breezy spring morning to be a local tourist and explore the staircase line of waterfalls that flow through Fall Creek Gorge throughout the Cornell University campus. 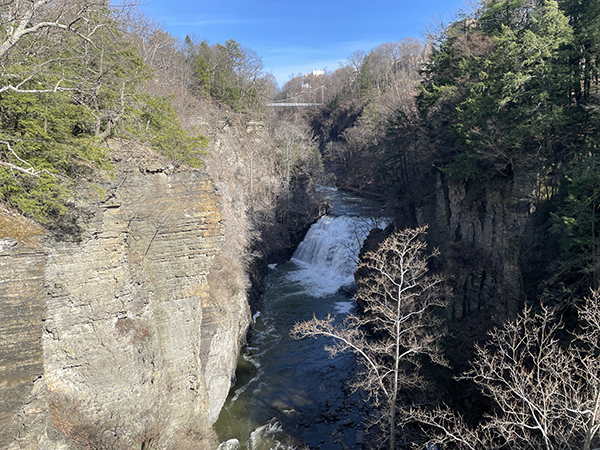 My morning begins at Ithaca Falls, the final waterfall in Fall Creek. At 156 feet, it is the largest waterfall in the gorge and is an impressive spectacle from the road that runs between it and Ithaca High School. Off-road and on foot, gravel paths lead me nearly to the base of the falls. The water rushes so quickly over the edge of the rocks above, a chilly mist rains over the area and coats the rocks and trees over a hundred feet away. The large rapids splashing forcefully at the base of the falls disperse quickly downstream out to Cayuga Lake. Signs along the path indicate swimming here to be prohibited but standing in the swift breeze and cooling mist would be just as refreshing in the intense heat and humidity of summer.

The low water downstream has already become a popular site for fly fishers this morning. In the fall and spring months, fish migrate from Cayuga Lake to lay their eggs at the base of the falls. The fishermen wade slowly into the current and cast their lines carefully to avoid catching them on the scraggly trees that grow out of the water. Between two of the trees, fallen branches and stones have dammed up the current, creating a shallow pool where two mallard ducks tread their feet and take turns bobbing underwater. Several hawks circle high above the falls and jagged sandstone cliffs as I exit the Ithaca Falls park. 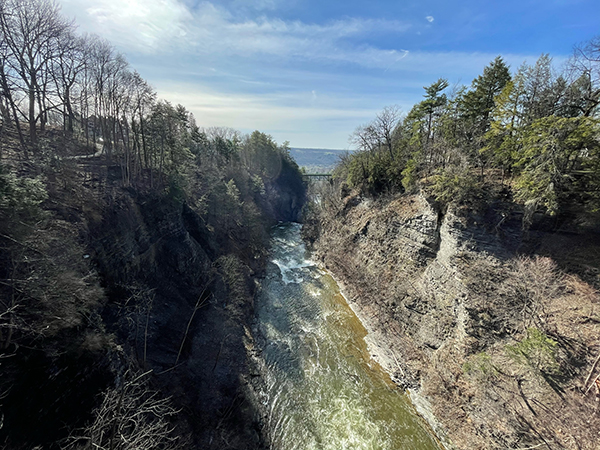 I slowly make my way through the winding streets toward the north end of campus to the Stewart Avenue bridge and the start of the Rim Trail. The trail is short, steep and follows the falls to a suspension bridge that crosses high above Horseshoe Falls. To one side of the bridge, I can see Rocky Falls and the bend in the stream that leads up to Triphammer Falls. To the other, the edge of Forest Falls flows to Ithaca Falls further below. The view over downtown from the bridge is spectacular, and the blues of Cayuga Lake shimmer in the sunlight in the distance. This brief venture across town has been a fantastic way to enjoy spring’s sunny arrival.

by Tim Fenster This summer, Fox Run Vineyards celebrates the 25th anniversary of its annual Glorious Garlic Festival on August 5 and 6. The…