When most people think of the Finger Lakes, the last thing that comes to mind is the word lizard. Surprisingly, the region is home to one of the most mysterious and enchanting reptiles in all of North America: the coal skink.

First documented by Spencer Fullerton Baird in 1850, it’s possible that the coal skink earned its name because of its proximity to Appalachia’s anthracite country. But whatever the name’s origin, this secretive lizard sports two dark, lateral stripes along the sides of its body that resemble trainloads of coal chugging across the countryside.

It’s a cold and overcast November morning as I step into the Cornell University Museum of Vertebrates in Ithaca. I’m greeted by Dr. Casey Dillman, Curator of Ichthyology (fishes) and Herpetology (reptiles and amphibians).

As curator, Dillman is responsible for managing the university’s voluminous collection of frogs, toads, salamanders, caecilians, snakes, turtles, crocodilians – and lizards. I watch as he gently turns a three-armed wheel, guiding a towering shelf of collections along a track system in the museum’s floor.

“This one was catalogued in 1892,” Dillman says, gesturing toward the label. “It was found in the Town of Caroline in Tompkins County.”

Skinks, like all lizards, have scales and claws. (The exception to this rule is the family of “legless lizards,” which are more snakelike in appearance.) Though small in stature (adults range anywhere from five to seven inches in length), the coal skink is big in terms of its flamboyant markings and persona.

While females are generally drab in appearance (a defensive trait that enables them to seamlessly blend in with leaf litter and other detritus on the forest floor), males display a crimson, fiery hue on the sides of their heads during the breeding season in an effort to attract a mate.

Juveniles are even more colorful – their tails flaunt a deep iridescent blue that, ironically, helps ensure their survival. Because their tails can detach and regenerate (a phenomenon known as autotomy), they’re able to evade predation with greater ease. They’re also master illusionists and can vanish in an instant, even taking to water when threatened.

The coal skink’s distribution throughout the Finger Lakes region is so spotty – and its appearance so rare – that it would be easy to assume it’s endangered. But it’s not. To the contrary, the coal skink is a thriving species, albeit one that seems to prefer anonymity. 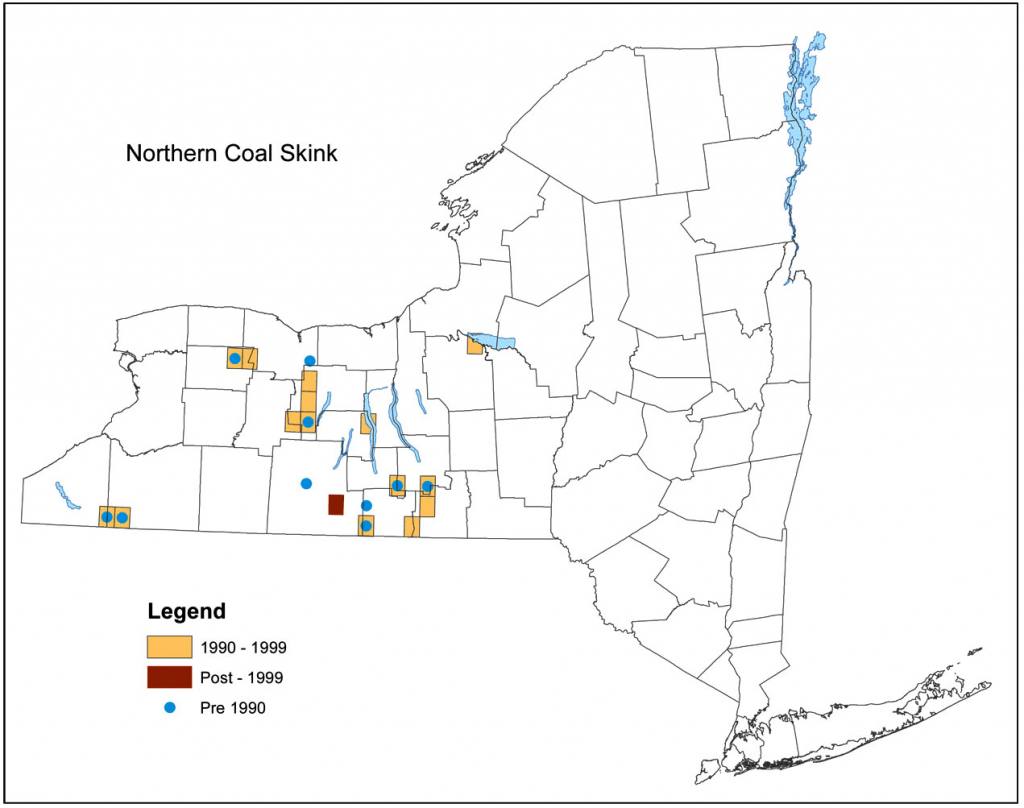 Though reported skink sightings are unusual, they’re certainly not unheard of. A friend of mine who lives near Ithaca crossed paths one afternoon with a juvenile coal skink that was relaxing in his driveway. (Skinks, like all reptiles, are cold blooded and regulate their body temperature by basking in direct sunlight.) It was a chance encounter that is difficult, if not impossible, to replicate.

So what if you do want to see one? The Peterson Field Guide to Reptiles and Amphibians of Eastern and Central North America states that “humid portions of wooded hillsides are favorite habitats; [as well as] springs and rocky bluffs overlooking creek valleys.” But it’s not as simple as turning over rocks or peeling the bark from downed timber.

Dillman, who’s seen the coal skink’s close relative – the five-lined skink – in both Missouri and Virginia, often looks to old stone foundations when seeking out his quarry. While frequenting the coal skink’s preferred haunts will undoubtedly increase your chances of catching a glimpse of this elusive reptile, the truth is that observing Eumeces anthracinus anthracinus in its natural habitat is more an act of providence than expertise. What it often boils down to is good luck.

Like many reptiles in New York State, the coal skink mates in the spring or early summer, with the female laying a clutch of as many as 8 to 10 eggs. According to Dillman, it’s not uncommon for one female to mate with a handful of males over the course of a single breeding season.

“If multiple paternities take place,” says Dillman, “the hypothesis is that the female will spread the genetic diversity of the population to her offspring. This maximizes the fitness of an individual within a given species.”

And if their numbers are any indication, the coal skink will continue to populate the distant corners of our region’s most remote habitats for generations to come.