Some people have seasonal affective disorder or SAD. I get a touch of that; and this year the cold makes for an extended SAD season. But another malady, one a bit more unfortunate, also strikes me. I am subject to moon affective disorder or MAD. No surprise there some might say. By the way, if you can’t find this term (which I couldn’t), I claim rights for inventing it.

MAD comes to mind because last night and tonight (May 7) offer the last super moon of the year. That’s when the full moon occurs at its closest to earth in its orbit; its nearness makes it appear a bit bigger and brighter than normal.

Here was my concern. If a regular full moon triggers my MAD would a super moon magnify it?

Last evening, almost against my will, I was drawn outside with my camera bag to an isolated field with a tree. Suddenly I was standing alone in a field with a tree and the full moon. How did that happen?  Despite impeccable journals such as Scientific American debunking any relationship between the moon and temporary “lunacy” or other misbehavior, I feel it.

I doubt they studied photographers.

But I have another effect from my malady of MAD. The other effect is – I hate to say it – emotional. When I’m photographing the full moon, I tend to become overly sentimental (which is why I usually do it alone). Romantic, melancholic, forlorn, sad, wistful (but I assure you, never ever weepy) – all these feelings sweep through me when there’s a full moon. And for some reason they stir more memories of missteps than successes. Relationships gone awry, friends lost, hair disappearing, joints creaking, math skills eroding. I poke face-saving fun but….

Still, despite overwhelming scientific evidence to the contrary, I believe this descent into a few hours of screwball thinking during a full moon is a fairly common malady. I believe if Scientific American or the Pyschological Bulletin began a more rigorous inquiry they would come to agree with me. After all, on my side is an abundance of TV shows, movies, and literature depicting whacky behavior of people influenced by the full moon. 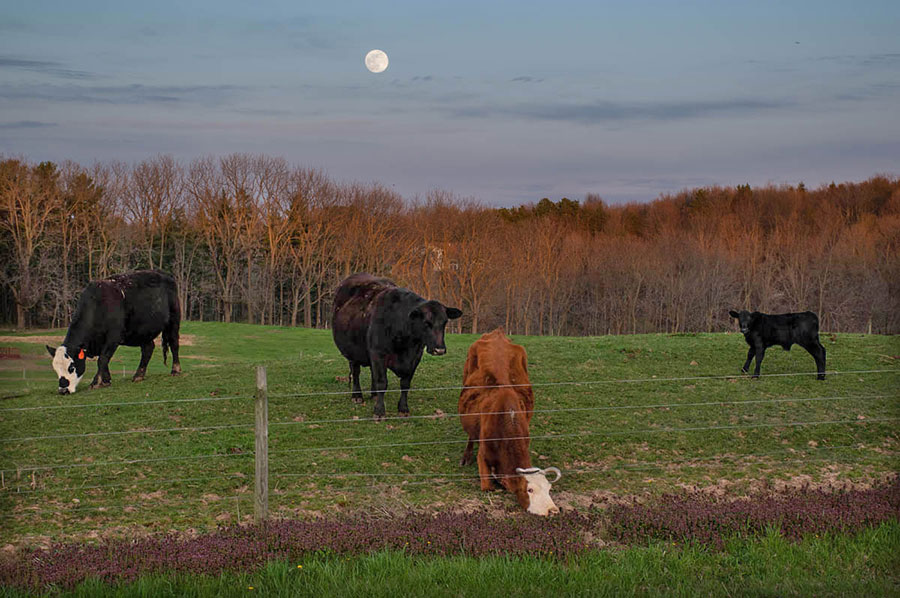 Still, last night, alone with the full moon and a spaghetti brain, I was quite relieved when I came across some cows seemingly unaffected by the same full moon. They completely ignored it and me. Freeing me to do the same. Letting me enjoy the super moon for its simple beauty. However, one cow did seem somewhat moonstruck. It became obsessed with the large clumps of fresh grass that were two feet beyond the barbed wire fence. Another cow, right behind it, seemed to be shaking its head at its colleague’s behavior. Still, the cow had to have that grass and was extending its head as far as possible under the wire to reach it, heedless of the barbs threatening to slice its neck.

Now that’s a cow I can identify with.