From Watkins Glen to Geneva, from Syracuse to Rochester and points in between, we have the Finger Lakes covered with new books with an FLX connection. It’s time to find out why hard cider is experiencing a rebirth and how the Erie Canal affected “Salt City.” Curl up with one of these absorbing tales of real-life figures who left their mark or relatable stories of contemporary fictional families dealing with life’s challenges. See the reviews on page 74. 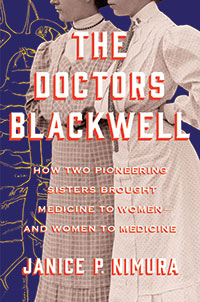 Sisters Elizabeth and Emily Blackwell, who immigrated to America with their parents and numerous siblings from Bristol, England in 1832, are the subjects of this compelling and well-researched biography. Each sought a medical career in 19th century America and Europe at a time when only men became doctors. Elizabeth was the first woman to obtain a medical degree. In 1849, after receiving rejections from many medical schools, she was admitted to Geneva Medical College (now Hobart College) through a student vote – a lighthearted gesture. She later earned their respect.

Emily, less well known, also succeeded in becoming a doctor. Like her sister, she pursued additional training in European hospitals. Elizabeth practiced medicine in New York City, establishing a dispensary in 1857. The sisters later started the Woman’s Medical College of the New York Infirmary in 1868 to increase the number of rigorously educated female doctors. Under Emily’s guidance, it survived for 30 years after Elizabeth returned to Europe. These life stories rely on the Blackwell family’s correspondence to reveal the sisters’ opinions on contemporary medical practices and details of their personal lives and relationships.

Janice P. Nimura is the author of Daughters of the Samurai: A Journey from East to West and Back, a New York Times Notable book in 2015. Her essays and book reviews have appeared in many publications. 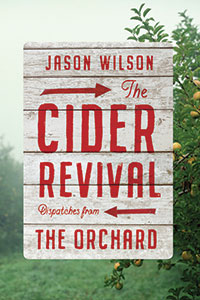 Cider was America’s original favorite beverage. During Prohibition, orchards were destroyed and neglected. Other alcoholic drinks surpassed it, but cider is now experiencing a rebirth. New York State leads the nation with about 90 licensed cideries. The story behind the cider revival unfolds through conversations with those involved in apple orchards found in the Finger Lakes, the Catskills, New England, the West Coast and beyond.

The Finger Lakes is playing a pivotal role in cider’s resurgence. “The thin isthmus between deep blue Cayuga and Seneca Lakes may have the finest concentration of artisan cideries in the nation,” writes Jason Wilson. His broad knowledge of wine and spirits makes him well suited to discuss ciders and he draws comparisons between cider production and winemaking. Wine comes from fermented grapes while cider is made from fermented apples. The perfect unblemished dessert or culinary apples produce “modern” sweet ciders that are lower in alcohol. The book’s focus is the heritage ciders made today by smaller producers using assorted  heirloom apple varieties such as the Northern Spy and wild apples foraged from uncultivated trees.

An award-winning journalist and knowledgeable travel-writer, Jason Wilson has served as a judge at North America’s largest cider competition. An appendix offers top cider bars and notable American cideries to help readers to sample ciders for themselves. 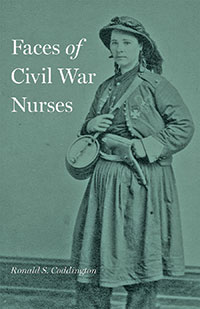 A fresh perspective on the Civil War is offered through this selection of stories of 77 women who served as nurses, aid workers and vivandières. The latter were freelancers who were unofficial attachés to regiments during the bloody conflict. Each female appears in a likeness reproduced from a surviving tin type or carte des visite. While the majority of these women provided support for the Union cause, three Southerners are included in this collection.

The first subject, Almira Fales, is shown holding two baskets of supplies used to tend Union soldiers. Like Fales, some of these little-known patriots came from New York State and the Finger Lakes area. She relocated to Washington, D.C., where boarders welcomed into her home included Clara Barton, the founder of the American Red Cross. The author does not dwell on well-known figures such as Barton or Dorothea Dix, the person charged with the administration of military hospitals. Instead, he features women with intriguing stories that have not yet been told.

Author Ronald S. Coddington successfully humanizes the Civil War through these well-written biographies and accompanying images. He is the editor of The Chronicle of Higher Education and the editor and publisher of Military Images magazine. His previous books focus on Union, Confederate, and African American soldiers, along with sailors who served in the Union and Confederate navies. 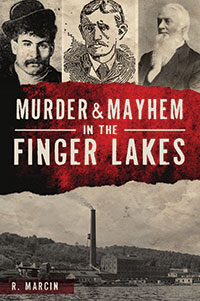 Real-life homicides in the Finger Lakes Region from 1828 to 1911 are recounted in this engrossing book of high-profile crimes. A sometimes-chilling read unfolds through the vivid descriptions detailing each murder and the circumstances leading up to the fatal attack. Background information explains the relationships between victims and their assailants. Trials and executions of the accused were then fully covered in the local press. The author has carefully researched newspaper accounts where the murders occurred – in Seneca, Cayuga, Wayne, Ontario, Tompkins, Schuyler, Livingston and Yates Counties.

The accused murderers are male with the exception of Elizabeth Rogers and Elizabeth Brooks, tried for the death of a man who forcibly sought admittance to Rogers’ home on Pulteney Street in Geneva. Rogers reportedly defended herself by inflicting deadly blows with a large pottery milk pitcher.

After learning the facts of each case, the reader may consider whether the accused was rightfully judged. Hangings, one punishment facing those found guilty, were often public events, attracting many spectators. Surviving illustrations of some of the accused persons and diagrams of crime scenes enhance these 10 tales.

Author Rikki Marcin has a master’s degree in French literature. She has written for the Watkins Review and Express and the Observer in Yates County. This is her first book. 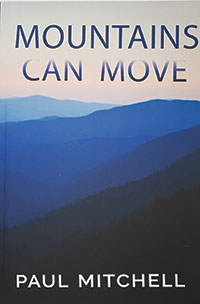 The deeply ingrained behaviors and attitudes of three generations of a family are tested in this novel when the eldest member struggles to remain independent. The aging Albert Martel supported his family as a plumber in Upstate New York, but his youthful involvement with the Abstract Expressionism art movement in New York City in the 1950s ignited his creative talents. After a lifetime of painting privately in his barn studio, Albert yearns to pursue it in an environment more conducive to artistic expression. The long-strained relationships between Albert and his two adult children – and a tragic family secret – cloud everyone’s ability to resolve the situation easily without conflict.

The characters in this story are relatable and well-drawn. Toxic family dynamics are played out primarily around Albert’s Rochester home. His son Andy, a Wall Street lawyer whose own life is unraveling, insists on solutions that clash with the expectations of his sister Bonnie, their father’s primary caretaker. Only Albert’s 21-year old granddaughter Sophie understands her grandfather’s artistic passion and recognizes his ability. The family’s Christian faith, old friends, new acquaintances and even Albert’s old restored truck affect the outcome. Readers will enjoy numerous references to Rochester and the Finger Lakes area.

Author Paul Mitchell is a retired nurse practitioner, a resident of Middlesex and an accomplished photographer. This is his first book. 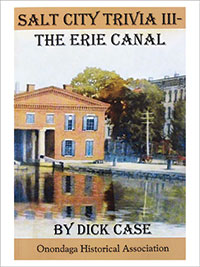 The history of the Erie Canal, the 19th century waterway that contributed to commerce in New York State, is replete with trivia. Which town is at the exact midpoint of the original Albany to Buffalo canal route? The answer is Camillus, where today the Camillus Erie Canal Park preserves a seven-mile stretch of the Erie Canal. Like many communities, nearby Syracuse, or “Salt City,” grew and prospered after the canal allowed its products to be shipped more easily.

The compact book was drawn from the author’s love of “little facts that sometime are lost in the broader sweep of history.” Full-color archival illustrations accompany brief accounts and happenings related to canal history across the state. Some are familiar, like the image of Governor Dewitt Clinton pouring Lake Erie water into New York Harbor in 1825. Less well known is the newspaper account of the first female pathmaster. In 1904, Mary Porter of Baldwinsville daily patrolled a 10-mile section of the towpath and berm to seal leaks.

This is the third “Salt City Trivia” book written by Dick Case, who passed away shortly after the book’s release. The Central New Yorker was a native of Marcellus and graduate of Syracuse University. He was active with the Onondaga Historical Association after retiring from a long and successful career in journalism. 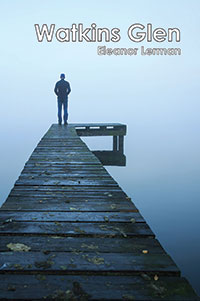 This fictional tale of aging siblings Mark and Susan Kleinzinger takes the reader on a roller coaster ride as they deal with myriad difficulties following Mark’s Alzheimer’s diagnosis. The pair grew up in the Bronx, where their father labored in the family’s upholstery business except in the summer when he raced cars in Watkins Glen. After years of moving around, Susan has settled near the world-famous racecar center and cares for her brother by bringing him to live with her. Together they must face Mark’s deteriorating mental state, Susan’s precarious lifestyle, their youthful memories and a changing relationship.

The complicated situation unfolds through Susan’s first-person narration. Mark has become obsessed with painting, a rare symptom of dementia called Acquired Artist Syndrome. A retired math teacher, he was never interested in art, but while painting Seneca Lake he becomes fixated on his imagined sighting of a Loch Ness-like lake monster. The seriousness of the situation is lightened by the hope offered through characters like Susan’s friend and employer, a free-spirited gift shop owner. Well-crafted descriptions contrast the natural scenery around Watkins Glen with the downstate environment where the siblings were raised. 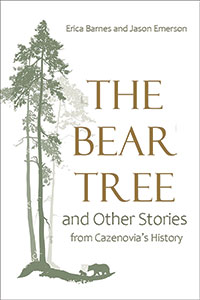 Upcoming in the November/December 2021 issue of Life in the Finger Lakes are reviews of more books about life, real and imaginary in the Finger Lakes Region. These will include The Bear Tree and Other Stories from Cazenovia’s History. The book chronicles the fascinating people, places and history of the 225-year-old community. The publisher’s description says it “explores the unheralded, inaccurately told, and long-forgotten tales of the town.”

This title is co-authored by teacher and historian Erica Barnes and independent historian and journalist Jason Emerson, former editor of the Cazenovia Republican newspaper.

Readers can pre-order a copy from your favorite independent bookstore, press.syr.edu, Amazon.com and elsewhere.

Last Christmas a neighbor of mine, Martha, bought her guy, Chuck, a gift: my time as a photographer to photograph his sailboat, the Delta…