The City of Canandaigua Centennial Endowment Fund Committee has completed the first of many projects to enhance the Downtown Canandaigua experience. The Committee secured local artist Amy Colburn to design, paint, and manage a large, vibrant and colorful, historic-themed mural project for the exterior of Crown Jewelers located at 142 Main Street. The mural is titled, “Step Back in Time”.

The process began with several meetings with the City of Canandaigua Endowment Fund Committee, whose goal for this project was to create a mural highlighting Canandaigua’s rich history and iconic imagery. The discussion began with Mayor Ellen Polimeni referring to Daily Messenger news articles that were published back in 2008, in which residents were asked to submit ideas about possible inclusions in a downtown mural. Unfortunately, the mural project didn’t come to fruition back then, but Mayor Polimeni (member of the current mural committee, and art enthusiast) felt as though that was a logical place to begin the arduous task of deciding what to include. It has been Mayor Polimeni’s dream to be able to complete a Downtown mural ever since the 2008 project failed to lift-off. 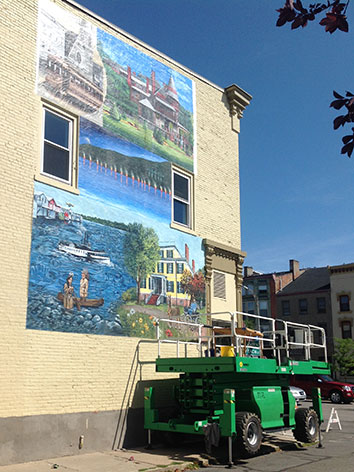 The mural on Coach Street during the installation process.

Colburn, and the members of the Committee, chose four additional artists to join her in painting the mural. A Call for Artists was issued in December of 2015 to all local artists interested in painting a portion of the mural. From the 20 applicants, four were chosen: Meredith Mallwitz, Jane Alden, Melissa Newcomb, and Chloe Smith. The mural artists each painted a section of the mural on a sturdy composite material called Evolon during the winter, and then last week the Evolon was adhered to the side of Crown Jewelers, facing Commons Park and South Main Street. Mark Peacock, owner of Peacock Paint and Wall Covering of Rochester, assisted with the mural installation.

The collage-style mural depicts several significant historical people, places and events in Canandaigua’s history. Some of the images seen in the mural include Mary Clarke Thompson, Sonnenberg Gardens and Mansion, The Ganger Homestead, the Iroquois Ring of Fire, Roseland Park Carousel, Jesse Hawley (who conceptualized the Erie Canal while in Canandaigua), and Canandaigua’s electric trolley known as “Dinky”. A plaque describing the elements of the mural, and the artist who painted each, is expected to be placed on the wall in the coming weeks.

Colburn says of the project, “I encouraged each artist to paint their own vision, in their own unique style. My hope is that passersby enjoy the variety of painting styles, and that they recognize the mural was done by five different artists. It was important to me that each of the artists shine on their own. At the same time, I had to make sure we created a cohesive mural.”

The public is invited to attend a mural dedication ceremony at Commons Park, adjacent to the mural site, on September 23, 2016 from 9:30 to  10 a.m. (rain location is Finger Lakes Gallery & Frame, on Main Street). Colburn is also on the steering committee for the Global Mural Conference, being held at Woodcliff Hotel & Spa, September 18-24. Conference attendees will be bused from Woodcliff to Canandaigua for the dedication on September 23, and afterward they will enjoy a guided tour of public art throughout Downtown Canandaigua. For more info on the Conference, and to register, please visit www.gmc2016.com.

Amy Colburn’s website is www.amycolburn.com. Her site features a blog, highlighting stories of each of the artists who painted the mural, as well as more details and photos of the design process.

06/18/2018 by Kim Thompson, The Corning Museum of Glass “Fifteen miles on the Erie Canal/We’ve haul’d some barges in our day/Filled with lumber, coal…