Story and Photos by Derek Doeffinger

Do you love spiders? I don’t. But I love their webs.

So when my friend Gary called me at 8 a.m. this past Sunday and excitedly shouted out his discovery over the phone my imagination sprang into action. He said, “I just drove by a field covered with so many spider webs it looks like it snowed.”  I grabbed my camera bag and dashed out the door.

He wasn’t kidding. From the roadside, I could see a field covered with webs. Not those beautiful dew-bejeweled circular webs made by orb spiders. These were amorphous masses of giant cob webs (like tattered and twisted white baby blankets) stretching across the ground. Hundreds of them. So many that they were daunting. But they were sparkling with dew. 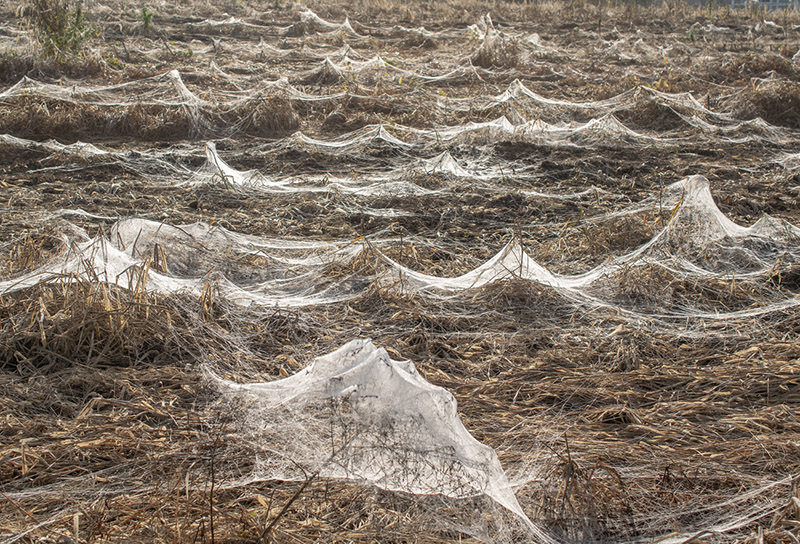 There was a choice to be made. Let’s say it again: I don’t love spiders. But I do love dew-covered spider webs. And a photographic challenge. Thus I couldn’t resist. Into the field I went.

From a few inches to a few feet high, and a few to several feet long, the webs, often interconnected, spread across half an acre of field. It was an old wet corn field made mushy by rain and decaying, odorless cow manure that clung to my soles. Backlit by the still rising sun, the webs sparkled but lacked the pleasing charm of the spirographic geometry of orb webs. A few looked liked skewed tents, while most seemed like thin cotton batting scattered around a room after the dogs got done tugging on them.

As I kneeled on the ground to photograph them, I eventually looked into one. It was an amazing mass of seemingly impenetrable crisscrossing threads. I looked deeper to try and find the spiders. I didn’t spot one or two, but several, perhaps a dozen, in a space the size of a lunch box. You do the calculations. Not a field I’d choose for glamping. The good news was that the spiders were small and stubby, about a quarter inch and dark brown. And they showed no interest in me and didn’t leave their webs. 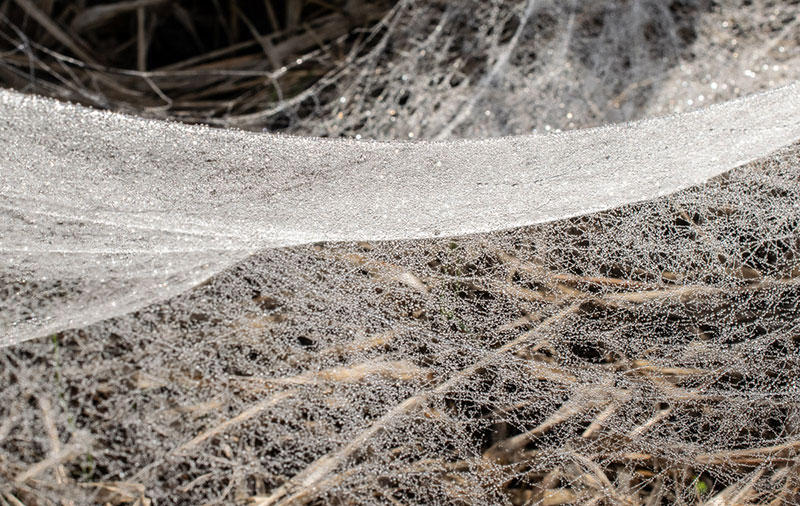 The web construction results in a mass of interconnected (non-sticky) strands that hinders the maneuvers of any insect seeking to escape.

A little online research gave me a good idea of what they were and how they trapped their prey. They were a species of sheet weaving spiders (if you know more, provide some feedback below). They’re common in crop fields. And most of them don’t use sticky webs to catch their prey. Instead they create a dense tangle of threads in sheets that prevent ensnared insects from escaping. Like orb spiders, these spiders typically detect prey by feeling the vibration of it moving about the web. Unlike orb spiders, which rebuild their webs almost every day, sheet weaving spiders try to use their webs for several days.

Their greatest claim may be their habit of traveling. They balloon. Clutching onto a long web strand, they wait for a gust to lift them skyward where they may be carried along for miles.

Later that afternoon when I drove by again I couldn’t see the webs. I suppose they were still there but with the sun high and the dew evaporated, they no longer called out from the fields.