One way or another, each of the eleven Finger Lakes eventually drains into Lake Ontario. The outlets of Conesus, Hemlock, Canadice, and Honeoye are all tributaries of the Genesee River, which enters the Great Lake at Rochester. Canandaigua, Keuka, Seneca, Cayuga, Owasco and Skaneateles all drain into the Seneca River. And the Otisco Lake outlet flows into and out of Onondaga Lake at Syracuse before joining the confluence of the Seneca and Oneida Rivers to form the Oswego River, which then empties into Lake Ontario at Oswego. Keuka is the only Finger Lake to drain into another, with its cascading outlet entering Seneca Lake at Dresden.

Even though every one of the Finger Lakes provides excellent fishing for a variety of species, Lake Ontario is the focus of this article because its salmon fishery is hard to beat at this time of year. Both Coho and Chinook salmon, also called Kings, begin to stage in schools in mid-August to prepare for fall spawning runs up a number of the big lake’s tributaries. They can usually be found inshore in the early morning and offshore and deeper after the sun gets higher. But they stay together in schools, which can provide a lot of exciting action once a school is found.

Neither species is native to Lake Ontario. Both are Pacific salmon that were introduced into the Great Lakes in the 1970s to control the burgeoning population of alewives—an Atlantic herring that made its way in through the St. Lawrence Seaway. The combined introductions of nonnative species—one inadvertent and one intentional—gave birth to a sportfishery that was already being hailed as world-class by the mid-1980s. 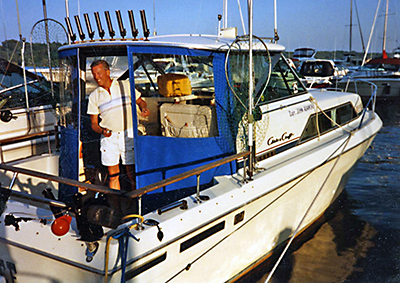 John Adamski on his charter boat

Late summer Chinooks can range from 20 to 35 pounds or more with Cohos running about half that size. Both are spectacular fighters. In the 1980s and 90s, as a U.S. Coast Guard-licensed captain, I ran a charter fishing operation on Lake Ontario out of Irondequoit Bay. My vessel was a 30-foot Chris Craft hardtop cruiser, equipped with 5 downriggers, a pair of outriggers, sonar, Loran-C navigation (the forerunner of GPS) interfaced with autopilot, and electronic gauges that gave the water temperature and trolling speed on the surface as well as at whatever downrigger depth I was trolling. When a salmon would hit, the punch of a button on the Loran unit would mark the lat/long coordinates and the autopilot would take the boat back to the same school after the fish was landed—which sometimes took more than half an hour.

With enough fishing licenses onboard, I could troll up to fourteen rods at once with two lines stacked on each downrigger, two on the surface from outriggers, and two more a bit deeper using diving planers. When the action started, the emphatic phrase “fish on!” was often followed by “it’s a screamer!” as fishing line peeled off the reel—and hooking into two or three at once was sheer pandemonium. There was also the chance of hooking an acrobatic Steelhead trout, another introduced Pacific species, which would jump over and tangle any lines that were still trailing in the water.

If you’d like to experience some exciting reel-stripping fishing action, you can find a qualified captain at www.lakeontariocharterboatassociation.com or www.geneseecharterboat.com. I was a member of both organizations for many years. But you’d better hurry. Charter bookings fill up fast at this time of year.

It’s easy for us to get caught up in the day-to-day of our busy lives and forget that we are a country at war….