The story began with one man.

Naples, a town of about 900 residents, has been known for Finger Lakes grapes and wine for more than 150 years, possibly since Jacob Widmer and Hiram Maxfield originated their wine cellars. The Historic Naples Grape Festival stands as a symbol of Naples’ place as the “wine center of the east.” And while the squishing of grapes can be heard throughout the Naples Valley in the fall, so too can the cheers and whistles of the town’s newest claim to fame: soccer. Wineries make sense, given the soil and climate of the Finger Lakes Region. But soccer?

How is it that hundreds of Naples-area parents congregate most every evening along the sidelines of numerous soccer fields for three seasons each year?  What – or who – explains the impetus behind perennial high school soccer championships? To a Naples resident, what’s the bigger deal, grapes or soccer?

The story of Naples soccer begins with Gary and Jeannie Schenk, in the late 1960s. After asking Jeannie to marry him (at the Grape Festival!), Gary soon began coaching at Naples High School. Over the course of 43 years, he took the team to victory 557 times and is still regarded as one of the all-time winningest coaches in the nation. Together, the Schenks changed young men’s lives for generations.

Gary explains that he effectively communicated with mutual respect and had a “no cut” policy, so all kids were “part of something.” He handed out playing time based on effort and demanded an expectation of winning. One time, the bus that Gary and his players rode in pulled into a parking lot at a Friday night sectional game, in which Naples was not expected to win. Gary thought the boys were a little too quiet so he gave them a bit of a tongue lashing, to build up their expectations for winning the game. At the end, as he walked off the bus, he said “By the way, practice is Monday at three. Don’t be late.” Parents loved him – he moved games from 4:30 p.m. to evening so parents could attend after work.

To Gary, team was everything. An opposing coach who had been mentored by Gary said, “Gary was passionate about soccer. He was compassionate to his players. And he always displayed true sportsmanship.”

By the mid-1970s, the Naples Green Machine began winning. Multiple league and sectional championships through the ’70s and ’80s culminated in a state championship in 1989 and another in 1999. It became apparent over those decades that Gary’s winning attitude was working – so much so that the next generation of Naples’ boys were learning from their parents, who had played soccer for Gary. Parents new to Naples soccer liked Gary’s approach to life: quality coaching, expectation to work, and everyone has a role on the team.

The future for Naples soccer and the parents within the community is bright. Current varsity coach Ryan Betrus learned directly from Gary. Betrus assembles local coaches, most of whom played in Naples, and keeps the kids busy with all kinds of sports activities. Local parents trust him like their parents trusted Gary. According to Betrus, the formula for winning soccer games at Naples always included the involvement of parents and kids who feel appreciated and respected. “Gary showed us the way,” he says.

For the village of Naples, the combination of grapes and soccer make for a powerful community and an outstanding place to live. As one parent happily described Naples, “Grapes are great, but soccer is talked about year-round and is definitely the pride of our town!” 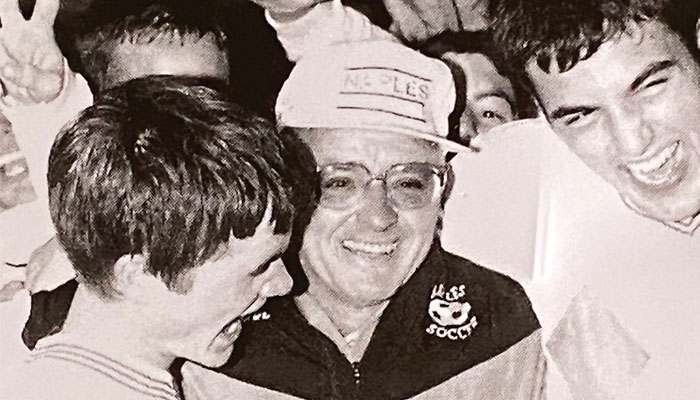 06/23/2021 story and photos by Ann Cady Meet Craft Farm, a new brand of clean in Elmira. A metal leaf cutout hangs over the door…